Tabletop Spotlight: Death from the Skies

The Tabletop Spotlight is on: Death from the Skies!

New from Games Workshop this week is Death from the Skies and lucky for us, our friends from Dragon’s Lair Comics & Fantasy brought it over to check out:

This book is packed full of all things flyer related (just vehicle flyers, sorry FMCs). Not only does this book introduce a new phase to “regular” Warhammer 40,000 – it also has a TON of background info for each and every race’s flyers. The Astra Militarum to the Xenos Eldar Flyers and everything in-between, this book has it covered. It also has a really cool section for painting guides for all the races with alternate paint schemes for flyers that you may not have seen before.

On top of all this great background info this book contains ALL the updated rules & points for flyers. Each flyer got a new pair of stats as well: Pursuit & Agility. Those stats come into play in the new phase and can have a big impact on your air support. This book also contains a bunch of new missions and a campaign supplement for flyers and flyer aces. It even has Wing Leader traits which function like mini-warlord traits for your flyers – and they are all free to apply! Each race has their own unique chart to roll on as well.

If you are really into flyers than this book is going to be perfect for you. If you’re looking to change up your regular games of 40k with some more dog-fighting action or if you just want to add something extra to a campaign then you should definitely get this book.

Death from the Skies 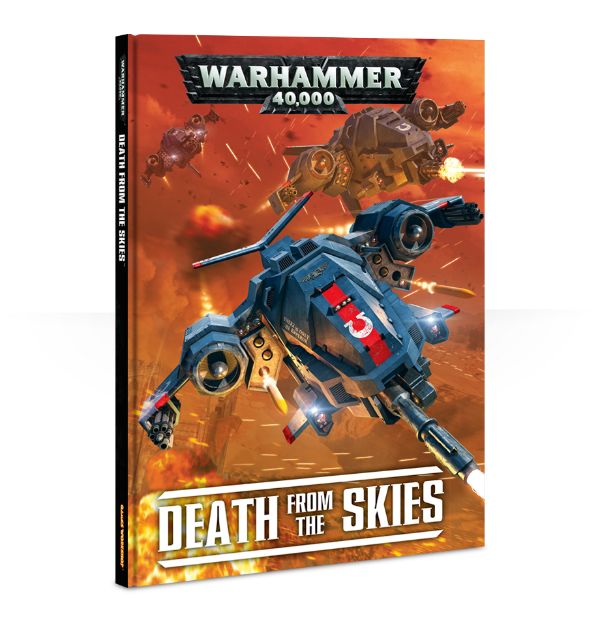 Now if only my Tyranids could participate in the flyer fun…

Author: Adam Harrison
Writer, Editor, Texas Native, and Austinite for 15+ years, Adam covers all things Tabletop Gaming. Which includes Warhammer 40,000, Age of Sigmar, D&D, Board Games and everything else that involves dice, boards, cards and a table. A hobbyist, player, and collector of miniatures and games, Adam's current obsession are his Death Armies for Age of Sigmar, his Blood Angels and Tyranids for 40k, and his ever growing Arkham Horror: The Card Game Collection.
Advertisement
Games Workshop Horus Heresy Tabletop Spotlight Videos Warhammer 40k
Advertisement