Warmachine: Protectorate of Menoth in V3 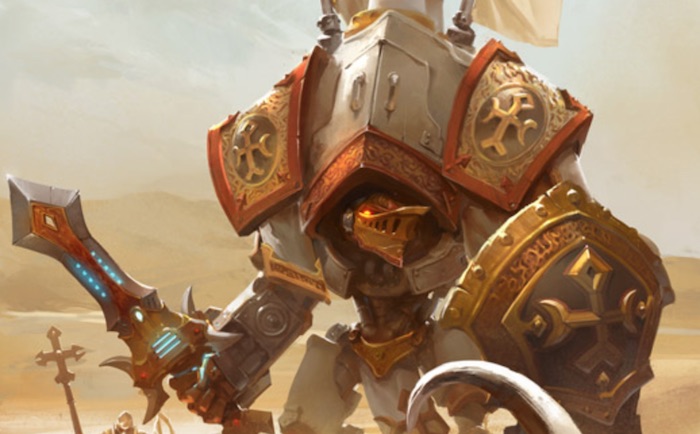 Lead developer Jason Soles gives us the 411 on Menoth in V3!

The themes of the Protectorate are the power of faith and prayer, manifestations of the divine, and counter-magic. This is a Faction with a great deal of internal synergy, with powerful prayers overcoming the shortcomings of the Protectorate’s soldiers and machines. 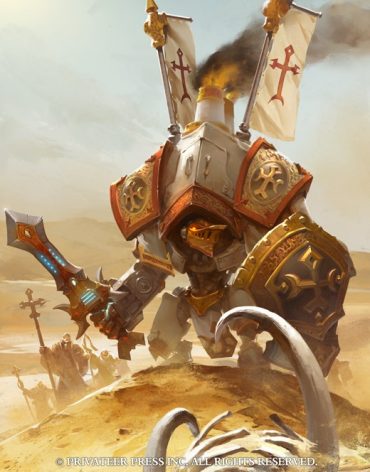 On the tabletop, this translates to a Faction of zealous fanatics backed by numerous and varied warjacks, the swords of deadly knights and paladins, and the prayers of devoted priests. The Protectorate not only possesses formidable anti-magic capabilities, but it also has the potential to blunt its opponents’ offensive might.

Despite a general trend in reducing the overall effectiveness of anti-magic abilities in the game, the Protectorate has maintained its edge. For example, the only models in the game that still have the Purification spell are High Exemplar Kreoss and the Harbinger of Menoth. (Of course, there are still some nasty surprises lurking among the other Factions. Doomshaper, I am looking at you.)

At the same time, we found that the introduction of Power Up, coupled with other significant changes to the game, throttled up the power level of some Faction mainstays a bit too much. The ease of repair and the free focus from Power Up pushed the Choir of Menoth into the red. The Protectorate player could reduce the potential amount of damage his warjacks suffered via the Hymns of Passage and Shielding, and then easily remove a large amount of the damage actually sustained with Vassal Mechaniks. Additionally, Power Up proved to be a force multiplier, enabling larger battlegroups to be too efficiently supported by Choir priests. We removed the +2 bonus to attack rolls from the Hymn of Battle in March of 2014 and never looked back. 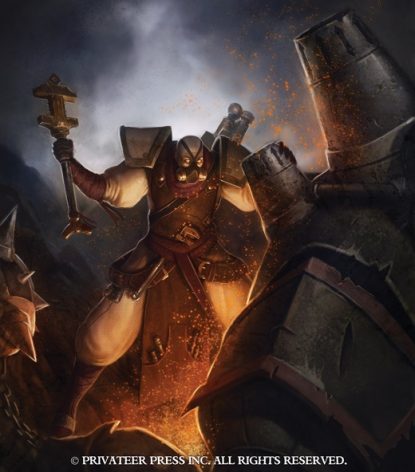 About a year later, we a made another significant change for similar reasons. Ancillary Attack on the Vassal of Menoth was clearly limiting our design space and holding back changes we wanted to make to the Protectorate’s warjacks. With the Choir, Power Up, and a pair of potent colossals, the ability was too strong on an FA 2 solo, and so Ancillary Attack was replaced with Empower. Soon after, we further throttled the Vassal back by removing the immunity to free strikes from Enliven. The Protectorate’s numerous and fairly inexpensive warjacks would have to suffer some damage if they were cornered as they lumbered across the battlefield.

The Vassals of Menoth picking up Empower created a redundancy with the Reclaimer Gatekeepers, whose role shifted considerably during playtest. 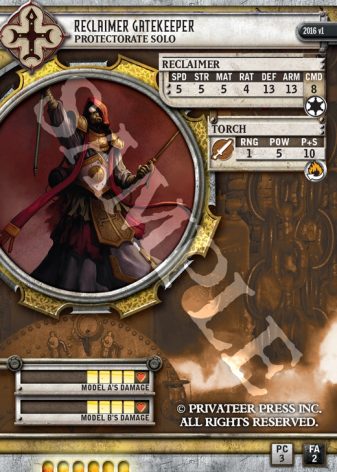 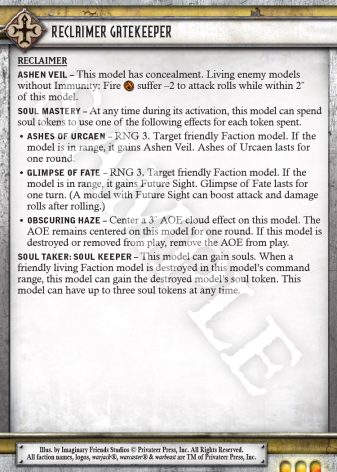 During this process, the Vigilant was born again with new purpose. A hallmark of tactical flexibility, the machine gained the Roadblock special rule, which states, “This model provides cover to friendly models as if it were an obstacle. This model loses Roadblock while it is incorporeal or knocked down.” So, the faithful can move up behind the machine, which the Choir can render untargetable by your opponent’s spells or ranged attacks.

The Redeemer in particular was transformed during playtest into a mobile weapons platform of incredible economy and raw destructive capability. Though it still retains the Inaccurate rule as a balancing factor, it can now always make three attacks a turn without spending any focus. That is three RNG 16 shots per activation whether it advances or stands still. Starting at POW 12, these attacks go up to an effective POW 14 if you have a Choir model handy—with at least one boost in your back pocket from Power Up—all for the cost of 11 points! 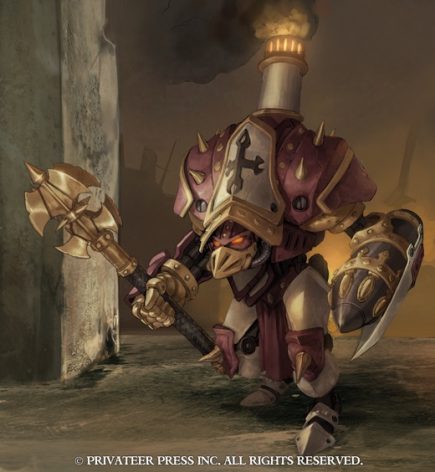 See, every time I start to talk about a warjack, I still have to reference the effect the Choir has on the machine. And even with the changes described above, the Reckoner tended to overshadow its competition in the Protectorate’s arsenal. This resulted in its loss of Assault

, though its Condemner cannon did go up to POW 14.

If for no other reason than to allow the Protectorate players a well-earned sigh of relief, I’ll tell you the only changes to the Avatar of Menoth were the loss of Terror

in the new edition and a cost of 20 points. Well, that, and its shield gained a 1˝ melee range.

Among the hardest models to balance was the Blood of Martyrs. Everything we tried—and there was plenty of trying—continually left the model feeling lackluster. The key was to create a warjack that could keep up with Thyra while staying true to its roots. This was doubly important since she picked up the Gates of Death upkeep spell, enabling her to be placed anywhere completely within 6˝ of her current location at the end of her activation. Consider the cat-and-mouse insanity of that spell. I am pretty happy with where we ended up. 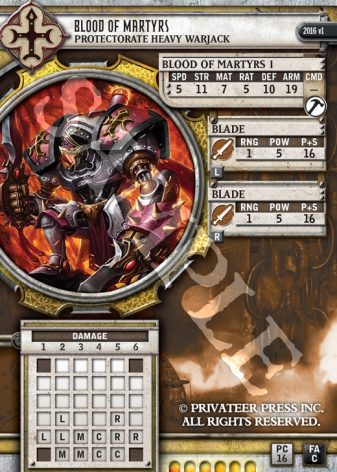 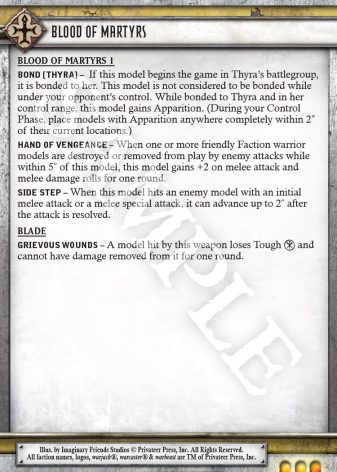 Even as the Protectorate’s warjacks were evolving, we busied ourselves with rebalancing the Faction’s infantry forces. Like the Choir of Menoth, the Holy Zealots lost their +2 to attack rolls from their Prayer of Fervor. But they also gained a new Prayer in the form of Path of Flames, which states, “Affected models gain Immunity: Fire

for one round. Models are not affected while out of formation.” That means you can at least spare your Zealots from blowing each other apart with their fire bombs.

Because of our changes to the Field Allowances of command attachments so they could match the FA of their units, we also had to adjust the power level of the Monolith Bearer. Nothing has the chance to stall a game quite like three units of nigh-invincible bomb-toting fanatics. To this end, we eventually reduced the point cost of the Monolith Bearer to 3 and changed Greater Destiny to read, “This model can use Greater Destiny once per game at the start of its unit’s activation. Immediately return all models to this unit that were destroyed during your opponent’s last turn to play. Place them completely within 3˝ of this model.” 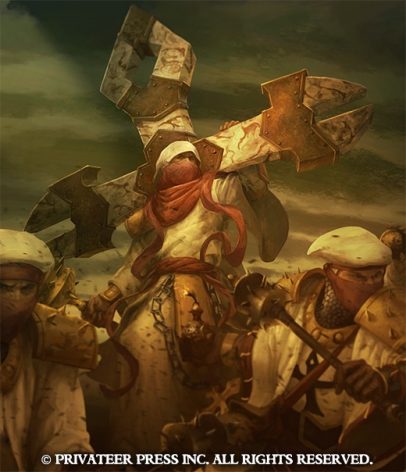 We also retooled the role of the Exemplar Errants a little. We had long felt that they were encroaching on space better represented by the Idrian Skirmishers, so we looked closely at their command attachment and replaced Tactics: Pathfinder and Tactics: Quick Work with Tactics: Assault. Continuing that theme, we replaced the Exemplar Errant Seneschal’s Leadership ability with one that grants Unyielding, completing the transformation of the Errants from knightly guerilla fighters to brutal frontline combatants. And yes, they retained Weapon Master and their 0.5˝ melee range.

We have already revealed that most medium-based infantry in the game are being reduced to 5 damage boxes, and the Protectorate’s infantry were not spared. We took the opportunity to further differentiate the Exemplar Bastions and the Cinerators, however. While both kept Weapon Master

, the Bastions lost a point of POW and gained Set Defense, and the Cinerators picked up Immunity: Fire

Switching gears to the Flameguard, the Daughters of the Flame trade a point of DEF (now 14) for Stealth

, while the Temple Flameguard remain little changed. The Flameguard Cleansers lost their Incinerate order and a point of DEF (now 11) but gained Ashen Veil and a 1˝ melee range. And their command attachment… well… 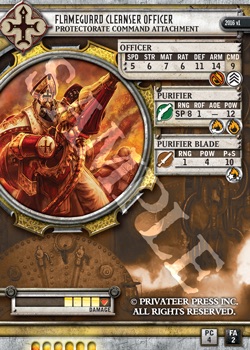 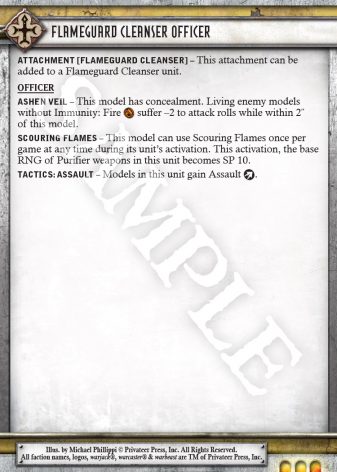 , though the POW of the weapons was reduced to 8. Even with Inaccurate, a full ten-model salvo with a RNG of 16˝ has an effective RAT of 10, even if the models in the unit move. And then it hits for POW 18 with a 3˝ AOE of POW 14 blast damage. And they explode on a roll of double 1s.

Just kidding…  that rule remains buried in Mk I.

Another of our initiatives in this new edition was to make sure that each warcaster felt truly distinct from the others in its Faction, to make sure that each offered a different play experience. This was fairly easy to do in a Faction with warcasters as varied as the Protectorate’s. As with all things, however, we had to carefully rebalance all these models with the changes to the new edition. With that in mind, we got to work. 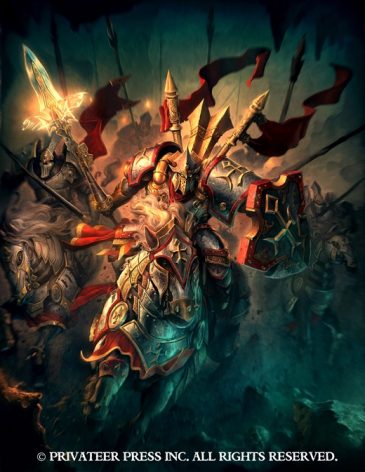 Would you believe me if I told you that Grand Scrutator Severius traded the Eye of Menoth spell for Influence? While that, dear reader, is not a joke, I am trolling you. Consider yourself a martyr for the cause. Severius did trade the pride of all Protectorate upkeep spells, but in doing so he gained it as a special rule. His feat also received a makeover and now reads, “While in Severius’ control range, enemy models cannot cast spells or be used to channel spells and enemy warcaster/warlock models suffer –2 FOCUS and FURY. Divine Might lasts for one round.”
And Severius 2… ? Oh, why not… 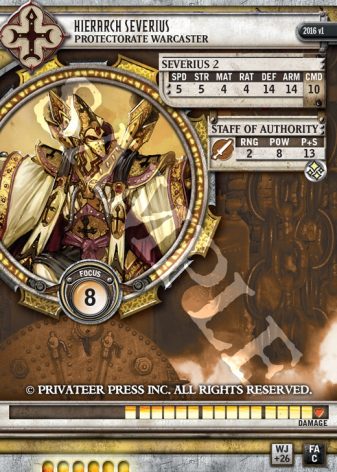 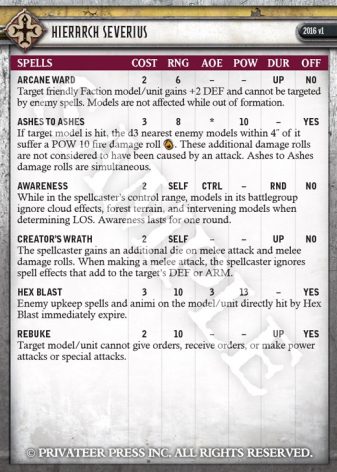 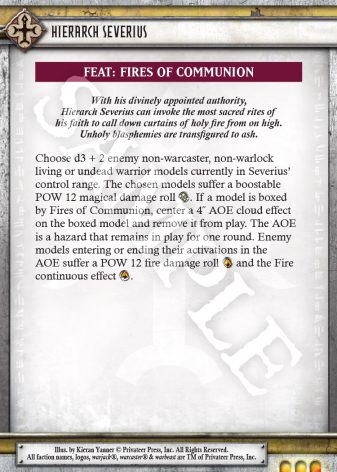 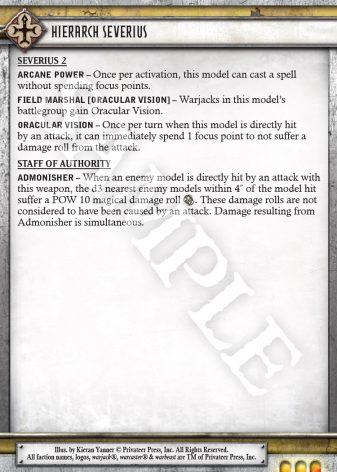 Throughout the process, the Harbinger proved to be one of the most difficult models to balance. If Power Up was a good addition for every other warcaster in the game, for the Harbinger it was a godsend. It turns out that a warcaster with FOCUS 10 and a massive control range gains a lotfrom being able to fuel a whole battlegroup with little cost to herself. Along with a few minor tweaks, we limited the effective range of the Harbinger’s feat to equal her command range and traded the Fear of God spell for Rebuke, the upkeep version of the same. Ultimately, some may say she got off a bit easy!

So, you had to know Synergy was going to change. And it did. This still-devastating spell now reads, “While in the spellcaster’s control range, models in this model’s battlegroup gain a +1 cumulative bonus on melee attack and melee damage rolls for each other model in the battlegroup that hit an enemy model with a melee attack this turn while in the spellcaster’s control range. This cumulative bonus cannot exceed +3.” Aside from this and a few other changes, High Allegiant Amon Ad-Raza lost Perfect Balance from his feat but picked up Field Marshal [Parry]. 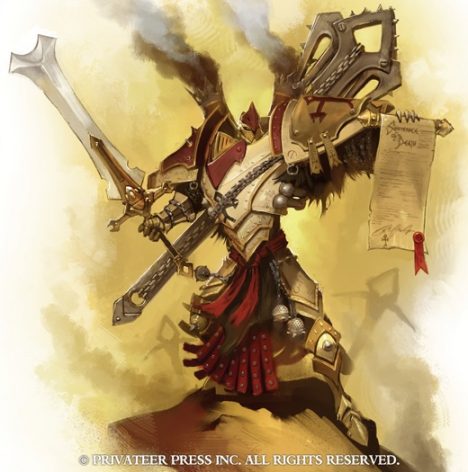 Once upon a time (in Mk I), High Executioner Reznik had a spell called Brand of Heresy. Well, it turns out he was more attached to it than we thought and traded Iron Aggression for it. The brutal spell reads, “Warjacks in the spellcaster’s battlegroup gain boosted attack and damage rolls against target model/unit.” This, on a warcaster with Engine of Destruction…

With that is time to say goodbye, my brothers and sisters. May Menoth’s light shine upon you, and may the faithless come to know his sacred wrath.

Alright, Menoth players, what do you think of the changes?