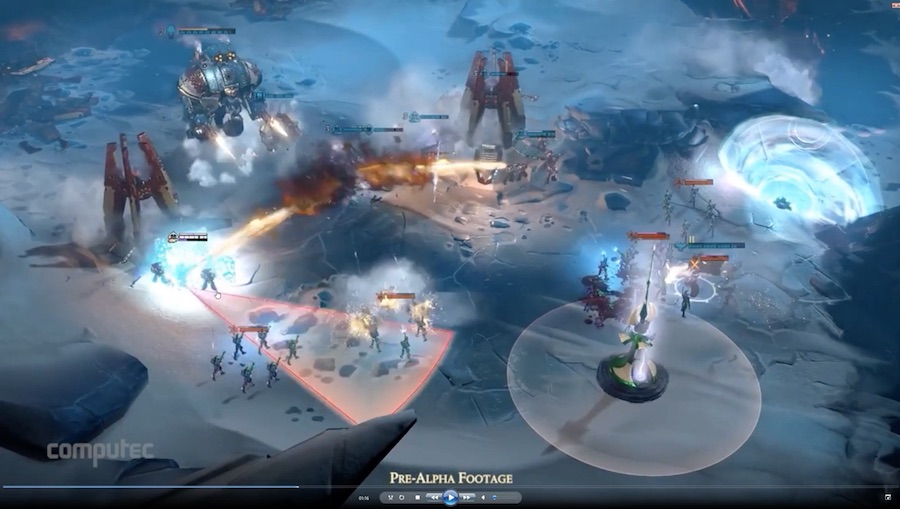 Get a look at Dawn of War III in this action packed pre-alpha play though!

Chapter Master Valrak gives as a look at the pre-alpha… it’s definitely pretty!

Dawn of War III immerses players in the escalating brutality of galactic warfare, where they will lead elite hero units and colossal armies to victory, or oblivion. Powerful super-walkers will tower over the front lines as screen-shaking assaults blister the battlefield in an all-out, over-the-top spectacle worthy of the iconic Games Workshop® Warhammer 40,000 universe.

Building on 12 years of explosive gameplay, Dawn of War III combines the epic scale of Dawn of War, with the customization and elite heroes of Dawn of War II. The result is a best-in-class edition giving players the rich strategic experience, stunning visuals, and catastrophic surprises that they’ve come to expect as Relic brings the franchise into the modern era.

“This is the Dawn of War that fans have been waiting for,” said Stephen MacDonald, the title’s Executive Producer. “Our biggest units ever? Check. Giant orbital lasers? Check. Base-building, epic heroes, huge battles, it’s all in there. Get ready for the biggest Dawn of War yet. For the Emperor!”

In Dawn of War® III you will have no choice but to face your foes when a catastrophic weapon is found on the mysterious world of Acheron.

With war raging and the planet under siege by the armies of greedy Ork warlord Gorgutz, ambitious Eldar seer Macha, and mighty Space Marine commander Gabriel Angelos, supremacy must ultimately be suspended for survival.

Take control of towering war machines and tip the balance of battle in your favor with the biggest characters in Dawn of War history. Turn the tide with the mighty Imperial Knight (Space Marine), the clattering Gorkanaut (Ork), or the haunting Wraithknight (Eldar).

Dawn of War® is famous for its epic action and those immense clashes are back – but now they’re off-the-scale. Wage war with massive armies across violent volcanic terrain or onboard battlecruisers travelling fast through space.

CALL UP YOUR ELITE

Take your battle plans to another level by deploying powerful collectible elite squads, each boasting their own special abilities and bonuses that will help you unlock and develop new attacking strategies to conquer your foes.

Cause devastation on the battlefield with powerful super-abilities . Rain down total destruction on your enemies with the Space Marine’s Orbital Bombardment, the Eldar’s blistering Eldritch Storm or the Ork’s Rokks to counter your unsuspecting rivals.

Learn what makes each force formidable through  alternating missions. You’ll soon come to understand the combat advantages of Space Marines, Orks, and Eldar and the rules of a universe with no heroes or villains… only war.

ONE ARMY TO RULE

Build your own universal army from the very first moment you are matched in a melee. Progress through battle after battle with loyal troops by your side across both challenging campaign missions and dominating multiplayer maps.

Your army will wreak havoc in online co-operative mode. Join the multiplayer community and forge new alliances – then turn the tables on your new ‘friends’ as they become foes in explosive, chaotic and competitive maps.

Does the new footage live up to your expectations?