Are the Deathwatch getting a new vehicle? One rumormonger thinks so!

It looks like Sad Panda is back with more rumors about the Deathwatch release. And this time he’s got some info on how the Deathwatch will be jumping into the fray:

When asked by another user:

What secrets do you still guard, Sad Panda! How bad is my wallet going to hurt for Deathwatch?!”

It’s not gonna bit a huge release, but enough. There’s a pretty cool, very sleek dropship/flyer with an enormous Inquisition =I= as fuselage.

Probably builds more than one variant.

Let’s break this down a bit. First off we have rumors of a “cool, very sleek dropship/flyer with an enormous Inquisition =I= as fuselage.” – No idea what that could be as early rumors were pointing to Drop Pods being the primary option for the Deathwatch. Could this be a variant Drop Pod or a completely new flyer type? Guess we’ll have to wait and see.

The second rumor about a 28mm Captain Artemis could pan out as well: 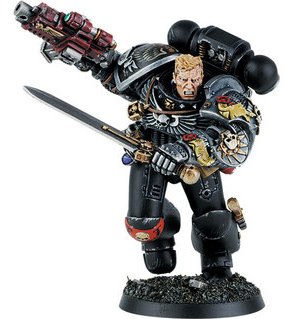 Artemis is one of the iconic miniatures from the much larger Inquisitor Game from Games Workshop. Players have made conversions for the Captain for years so a clam pack for a 40k scale model seems like a very simple move from GW. Plus if they are looking for more famous characters to add and create rules for then he could be a natural fit.