Warlord Games dives into the Zombie Apocalypse with Project Z – Come see what you get in the box!

Hey BoLS Readers! AdamHarry back with another quick BoLS Unboxing and this time I’m taking a look at Project Z – The Zombie Miniatures Game from Warlord.

Project Z is a skirmish level game where in 1 to 3 players can duke it out to be king of the undead hill. You can play as a group of surviors or a street gang taking on the brutal world and hordes of zombies. Game play is fast and simple. so it’s really easy to get into playing once you’ve got your crews built.

The Miniatures do require assembly but they are pretty well done. They are closer to a realistic scale in 28mm (think closer to Infinity vs Warhammer). One of the interesting things about the game is everything is supposed to by WYSIWYG. So if you model a survior with a shotgun – they have a shotgun. If you model them with a pistol and knife – then thats what they have. Gear does have an effect in game so it is important to do a little reading before you build. Or you can just go with a good mix and see what happens!

At this point I’d typically explain some of the basics of Gameplay. After you’ve got your crew assembled it’s really all about running scenarios until you’re comfortable enough to create your own. Plus the RULES ARE FREE to download and they do a much more exact job of explaining how to play than I will in a paragraph.

If are interested in a fast paced zombie skirmish game then definitely check out Project Z. Warlord games now has a ton more models available for the game since launch so you can find the right survivors or street gangs for what you want to do. Go check it out! 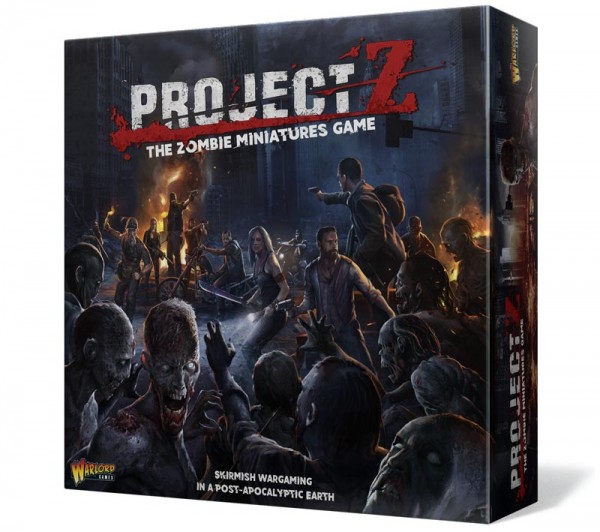 Fight to survive in the abandoned streets of a post-apocalyptic world infested by unnatural creatures hungry for your flesh. Scavenge for scarce supplies whilst battling against the dead and the living alike; there are no laws, there are no rules, only the fight.

Project Z is a skirmish wargame for 1 to 3 players taking control of Survivors or a Street Gang fighting to survive against the environment and an ever-growing horde of Zombies. Project Z is a fast and easy to learn game containing 39 detailed self-assembly plastic models, rules, counters and specially designed dice and cards.

Plus rules, dice, cards and counter