Deadzone: Getting Started with Rebs 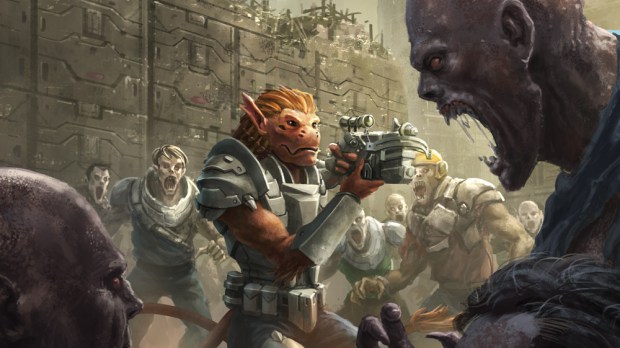 Start a revolution with this courageous and rebellious faction.

The Rebs are a growing group that has risen up in rebellion against the glitz, glamour and lies of the Corporation. Their numbers are small, their resources are scarce, and the odds are against them. Despite this they reach victory with their courage and cunning. Take a look at what they have to offer on the table top…

For our first Rebs Strike Teams, we will be building two different 100 point forces utilizing the Faction Starter. After a few games, you can expand your force with more options tailored to your specific style of play…..or just add what looks cool! The Rebs Faction Starter comes with four Yndij, but I’ve swapped one out for a DreadBall: Xtreme Yndij Reaver for the commander, because he looks so cool!

For our first Strike Team, let’s build around the Yndij Infiltrator Commander. Hide in Shadow is a strong Army Special and is key to giving some of your units more staying power. For our Troops, let’s utilize the rest of the Yndij from the starter. The three Yndij are solid troops and will give you some numbers to rush the field, utilizing their Agile rule to more easily navigate the ruins of the Deadzone. Their Scout special rule helps them get into the field even quicker, granting you a head start on grabbing some objectives. Next, we will add some Specialists–granting our team some more battlefield options. Let’s add two Survey Drones. Again, these are fast and useful for grabbing early objectives and items. And should some happen to get taken out of action, they won’t grant your opponent any victory points! Lastly, we will add some punch in the form of the Teraton. She is also very mobile, utilizing Teleport to get around the battlefield with ease. The Teraton packs a punch in Fights and with their size and a little bit of armor, they provide some staying power too. For our second force, let’s start with the Rebel Commander. She is an excellent marksman and to exploit this, we are going to add a Holo Sight to maximize her shots. Now, for Troops, we will add some more of her human compatriots. Three Rebel Troopers give us some numbers to spread the battlefield and absorb some inevitable casualties. It also opens up some Specialist slots for our Strike Team. Lets start by grabbing a Survey Drone, again to utilize its speed in grabbing objectives and items. Last, we will add a pair of Grogans to bring the firepower. One Grogan will be equipped with an Onslaught Cannon, this gives the team some more area control–suppressing the enemy and slowing their advance. The other Grogan will take the Desolator to provide some long range support, targeting the more heavily armored opposition units.

These starter forces are based on the contents of the Rebs Faction Starter – which is available to pre-order now! And you can find the Yndij Reaver in DreadBall Xtreme or the Free Agents Set.

What do you think of these strike teams?