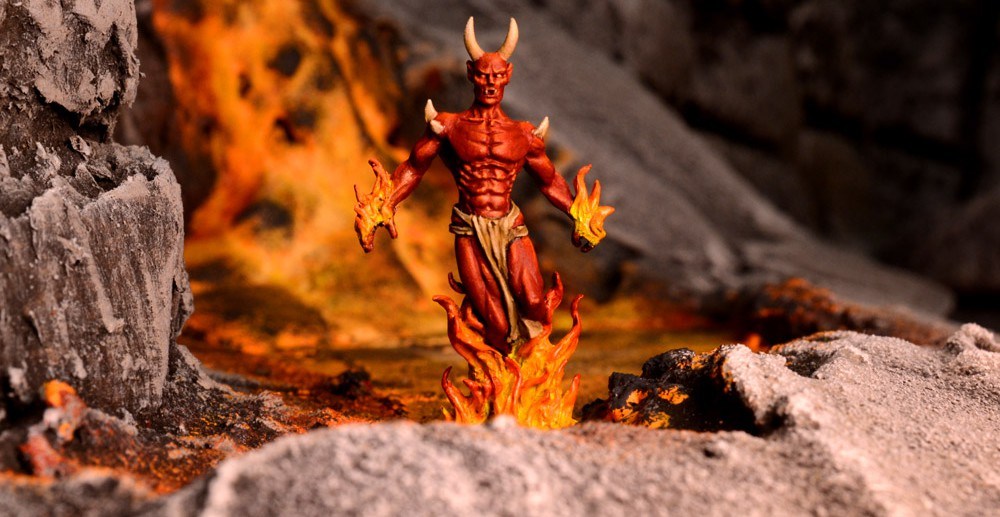 Are you brave enough to challenges the Forces of the Abyss in this Dungeon Saga Expansion?

To the north-east of the civilised world, lies the Abyss. This is a foul wound in the skin of the world; an unhealing scar from wars past and the root of all evil in Mantica. Few would willingly venture here, as the beings that dwell within its ruptured hellscapes are powerful and cruel.

Decieved by a callous mage, a small group of adventurers are thrown into the Abyss in search of a powerful alchemical ingredient. Out-numbered by the legions of the Abyssal Champion Drech’Nok, can these heroes complete their trial and survive? Dungeon Saga is a 2-5 player game of adventure amidst the treacherous dungeons of Mantica. One player takes controls of the Overlord – the main villain and antagonist of the adventure. They control the minions and the environment, creating challenges for heroes to overcome and trying to stop them from succeeding. Up to fours players take control of the valiant heroes, using their skill, strength and abilities to face the Overlord and their minions. The Infernal Crypts is a narrative expansion for Dungeon Saga: The Dwarf King’s Quest with six exciting scenarios for your heroes to face! Two new heroes join the fold – Venetia the  Cleric and Arianya the  Demonhunter – alongside Ragran the Barbarian and Semential the  Wizard. These stalwart individuals must face the dread hordes of the Abyss, led by their champion, Drech’Nok, as well as the dangers of their environment. Lakes of lava spew unnatural flames, while the air is filled with sulfurous fumes – all of which the Abyssals are unharmed by. This set is packed with everything you need to venture down into the Abyss, including a 24-page full colour questbook, characters cards for Ragran, Venetia, Semential, Arianya and Drech’Nok, an overlord panel and card deck for controlling the hordes of the Abyss, thick cardstock tiles to build the cavernous depths and lava flows your heroes will face and 21 pre-assembled plastic miniatures, including Drech’Nok, Arianya, Venetia and a horde of Abyssals. Dungeon Saga: The Infernal Crypts will be back in stock at the end of the month – order your copy here!

Strike at the Forces of the Abyss! But don’t get caught staring…