The Humans are DEAD – FFG announces the 4th book in the End of the World Series – Revolt of the Machines!

Prepare for destruction “Hu-Man” because Fantasy Flight Games has announced the fourth book of their End of the World series and the machines are in REVOLT! It’s another nightmare scenario where the world as you know it is coming to an end and this time the AIs are to blame:

Fantasy Flight Games is proud to announce Revolt of the Machines, the fourth book in The End of the World roleplaying game line!

Suited men walk lethally through the crowd, honing in on a single mother. A swarm of almost imperceptible nanites fly through the air, devouring any biological matter that they contact. You have a horrid, creeping sense of dread that suggests your dishwasher is trying to kill you. Technology has shaped our lives for so long, it’s almost impossible to imagine a world where it’s our worst enemy. Now, you can experience the tumult and chaos of this nightmare apocalypse for yourself. 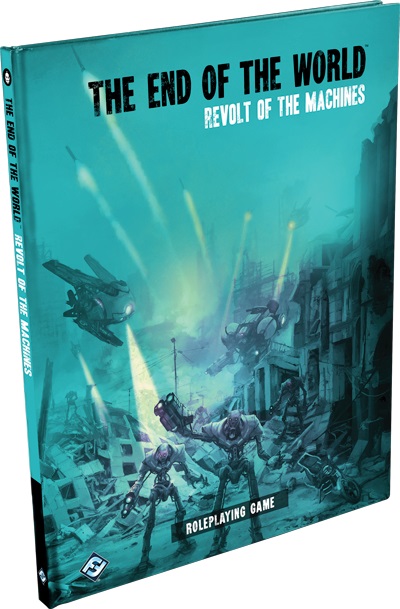 Revolt of the Machines is the fourth book in The End of the World roleplaying game line created by Álvaro Loman and José M. Rey. Like Zombie Apocalypse, Wrath of the Gods, and Alien Invasion before it, Revolt of the Machines gives you the incredible opportunity to play as yourself, in your own hometown, as the apocalypse erupts all around you. Five utterly unique scenarios with dozen of adversaries and encounters challenge you and your friends to survive a world where technology has gone rogue, while the elegant, narrative rules system keeps the focus on the story. Prepare to test yourself against the worst kind of technological revolution! 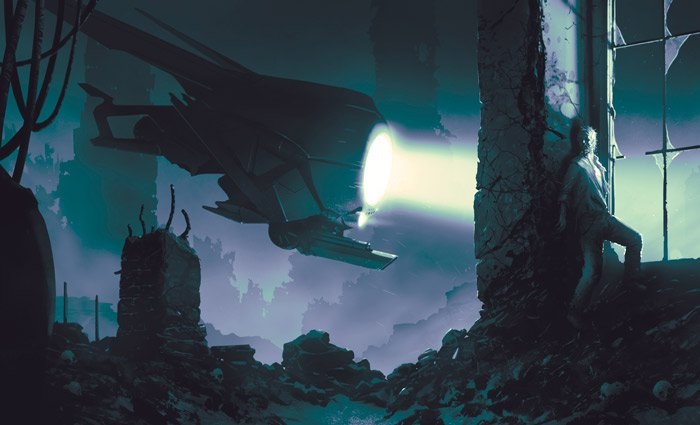 Before a drone ever swoops overhead, firing missiles into your home city’s downtown skyline, you and your friends will create abstracted versions of yourself by assigning points to six characteristics: dexterity, vitality, logic, willpower, charisma, and empathy. By matching these points to your own personality and skills, you’ll be able to represent your own capabilities in the game, whether you’re running from a incomprehensibly huge construct, reading the schematics of a cyborg prototype, or trying to convince another group of survivors that you’re not a threat.

Once everyone’s created a character, the Game Master starts one of the five scenarios included in Revolt of the Machines. These scenarios are incredibly varied, but they all begin in the same way—you and your friends are sitting around the table, in your own house, in your own hometown, playing a roleplaying game. As the first signs of the apocalypse break out around you, you’ll draw on your own knowledge of nearby streets and stores. You may know a patch of woods that’s completely off the grid or a sporting goods store that you can loot for weapons. No matter how the technological apocalypse is striking your group, you’ll need all of your personal knowledge, skills, and talents to survive for just another day. 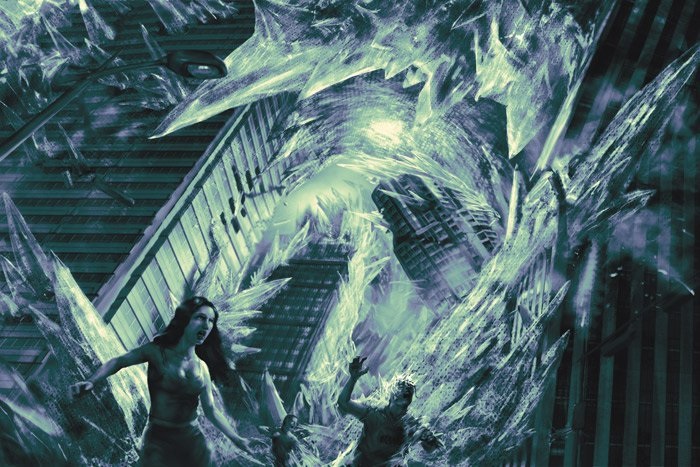 We created technology—from the earliest days of simple tools all the way up to supercomputers and rockets. We always assumed that creating this technology meant we were in control, but we may have just sown the seeds of our own destruction. In Revolt of the Machines, you’ll find five unique scenarios, and each one offers a different suggestion for how our own technology may destroy civilization as we know it.

No matter which scenario you choose to play, you’ll find dozens of uniquely crafted enemies and encounters within the scenario, providing the Game Master with plenty of material for creating a scenario or an entire campaign. In addition, Revolt of the Machines features the unique scenario structure shared throughout The End of the World line. Each scenario begins with the initial panic and fear of the apocalypse as our own technology turns against us. Much of humanity will perish in these first few weeks, but if you survive, a new normal may arise as you advance into the post-apocalypse. You can never predict exactly how a post-apocalypse will play out, but it will undoubtedly be just as dangerous as the apocalypse, if not more so.

The technology that permeates our daily lives has turned against us—now it’s up to you to determine whether you’re able to survive the incoming apocalypse. Every day is another victory, whether you’re hiding from cyborgs, hacking a drone, or stomping a printer to death. Prepare for the end of the world, and look for Revolt of the Machines at your local retailer in the third quarter of 2016!

Fantasy Flight Games has even more info from the full article on their site. We’ve actually covered the first 3 books in the series already:

The End of the World Roleplaying Line 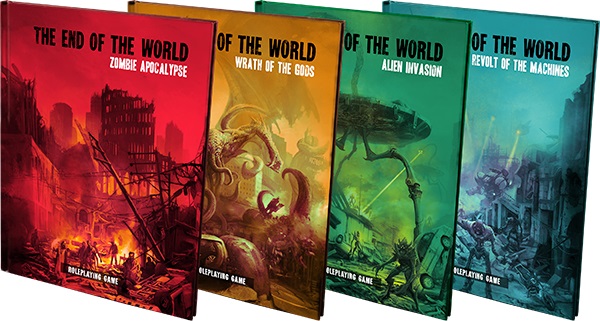 Wrath of the Gods

Revolt of the Machines

This system is really fun and gives you a neat framework to play-out those survival scenario discussions you’ve had with a friend until 4 in the morning. I know I’m not the only one who’s done it! Well now you can play it out with the End of the World RPG from FFG.