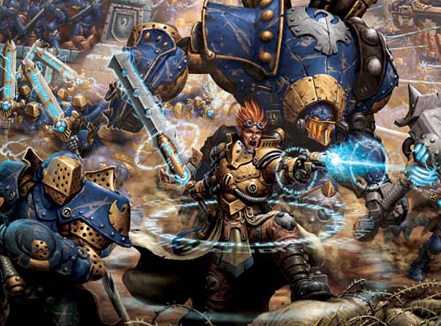 Privateer’s Will Shick spills the beans on Cygnar in Warmachine V3. Wait till you see what lightning can do now!

As we moved into rebalancing the new editions, our primary goal with Cygnar was to ensure we crystallized the concept of Cygnar as the well-rounded, technologically superior Faction. Of course, this Faction’s defining trait, while easy to identify, also makes Cygnar one of the most difficult to balance both internally and externally. Having a model be good at most everything means it has to come with a cost that reflects its ability to respond to those multiple situations. On the flip side, you also have to balance against the fact that a model loaded with so many options is never going to get a chance to use all of those options in every game. The Trencher Infantry are perhaps one of the best illustrations of this challenge in action. In Mk II, Trencher Infantry commanded a premium for their suite of abilities. They were the toolbox of toolbox units—they could create LOS blocking-cloud walls, had a solid ranged attack with CRA, came with Advanced Deploy, and had Assault for shooting and charging goodness. Add in the Officer, and Sniper for the impressive Cautious Advance order, plus the weapon attachment to add AOEs to their arsenal, and the trenchers could pretty much do it all. Yet for the most part, they remained a unit that saw little table time.

The biggest issue we came to realize was twofold: first, though the Trenchers could do it all, they weren’t particularly great at any of it. Second, they suffered from a point cost that didn’t quite balance out the number of options against their actual battlefield return.

Still, we knew we wanted to maintain Trencher Infantry as the Swiss army knife of Cygnar, so our first step was to reevaluate how they did what they did. Overall, the goal was to ensure they were able to get the right amount of benefit from all their options. Thus, their RAT was increased to 6, and their Bayonet was given RNG 1 and Brutal Charge. The Rifle Grenadier had his rifle grenade amped so that Blast Damage from it is POW 10, increasing its lethality against warrior models. The Officer kept Cautious Advance and picked up a once-per-game ability called Into the Breach, which allows models to drop smoke before charging. And being the grittiest, most hard-bitten troops in Cygnar, the Trenchers picked up Tough, as well. Now tuned-up to where they could make the best use of their myriad options, the next step was really dialing in their point cost, which at 10/16 for the unit, 5 for the Officer & Sniper, and 2 for the Rifle Grenadier seems like a steal for what this unit can do.

With this concrete example in mind, we had the essential approach to continue rebalancing the majority of Cygnar. Nearly every warjack that boasted range and melee capabilities got slight tweaks to improve its overall effectiveness at one or both. The Avenger, for example, got +1 MAT and RAT (as did the Hammersmith and the Centurion, of course); the Defender’s Shock Hammer went up to POW 6, giving it a healthy P+S 17 and making its MAT 7 far more appealing once the enemy closes in. While the Cyclone didn’t necessarily gain additional capabilities, its cost was dramatically reduced to PC 13. The Reliant also benefitted from a significant point cut to PC 14 while still retaining all its previous functionality.
Perhaps the epitome of Cygnaran warjack tech, the Thunderhead also saw some significant tuning up. Several units also benefitted from the rebalancing. The Arcane Tempest Gun Mages now have Gunfighter innately. After a lot of discussion, the Arcane Tempest Gun Mage Officer traded in Tactics: True Sight for Tactics: Practiced Maneuvers and picked up Granted: Swift Hunter. This opened the door for us to go back to the Gun Mage Captain Adept and create a solid place for him in the Faction, turning him into a powerful solo with great support and combat capabilities. As for some of the more specialized units, I really liked the changes to the tried-and-true Long Gunner Officer and Standard. The Officer’s once-per-game ability Flawless Maneuvers, giving the unit Reposition [5″], pairs brilliantly with his new Granted: Trained Fire ability, which grants models in the unit an additional die on ranged attack rolls against targets within 8″ of the attacking model. Sword Knights also got a nice bump with the change to Defensive Line; this now grants +2 DEF against melee attacks and immunity to Knockdown, making them great frontline jammers with effective DEF 15 versus melee, all at a point cost of 8/13.

With the removal of Skill Checks from the game, the Stormsmith Stormcaller became an interesting blend of original concept and new edition. Last but not least, I want to talk about the lynchpin of any WARMACHINE army: warcasters. As I was born and raised in Montana, Jeremiah Kraye has always resonated with me. Thanks to the changes for cavalry in the new editions, Kraye’s Iron Horse ability is bigger and badder than ever. Iron Horse now gives all his light and heavy warjacks Reposition [5″] and access to impact attacks! Plus, if that weren’t cool enough, the cavalry rules also mean his light and heavy warjacks get boosted attacks rolls on their charge attacks.

Another favorite of mine, Captain Allister Caine now truly embodies his gun mage roots with access to rune shot attack types on his Spellstorm pistols. That’s right: every time the notorious gun mage warcaster shoots (and yes he kept Reload [∞]), he can choose between Black Penny, Grievous Wounds, or Trick Shot. And he now innately has True Sight, so you can spend that focus on other things (like more Trick Shot Spellstorm attacks) or upkeeping his new spell addition Fire for Effect.

Nemo 1 has gained the awesome Field Marshal [Supercharge], which lets warjacks in his battlegroup have 4 focus instead of 3 at any time. He also keeps Arcane Accumulator, giving him access to 10 focus a turn with which to Supercharge his warjacks. Alongside his feat (which remained largely unchanged) and his spell Voltaic Snare (which is now COST 2 AOE 4), Nemo 1 has really cemented himself as a warcaster who can push his battlegroup to incredible heights while denying his enemies the ability to tap their battlegroups’ full potential.

Not to be outdone by her pistol-wielding comrade, Kara Sloan has brought several new tricks with her to the new editions, not the least of which is her spell Guided Fire. Combine this with her feat and poof! so many dead things. And because I know you have waited so long for this day, I have one more item to share with you before I end this Insider. Remember earlier when I mentioned Cygnar and its unhealthy fascination with lightning? Well, we would be quite remiss to not take the occasion of the new editions to make the Storm Strider into the lightning-spewing engine of destruction for the new age. So, polish up those Cygnuses, my fellow warriors in blue, because there’s one hell of a storm brewing on the horizon, and it’s going to break at Lock & Load GameFest 2016!