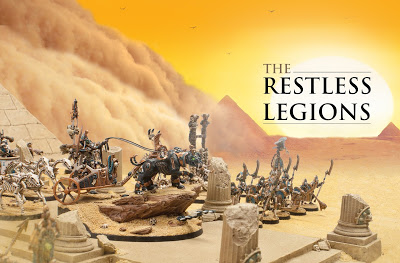 Without further ado here is my entire painted Tomb King army to date.

My Tomb Kings have been in the works since I started the army back in 2011, and when Adepticon was approaching I finally had a concrete date to get them finished by. With everything done for the tournament here’s a look over my Tomb King army finished to date. 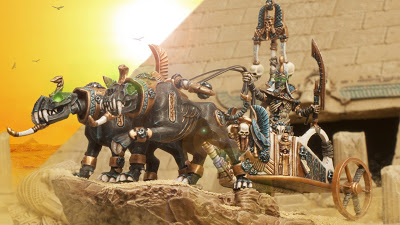 King Pharakh is the crowning jewel of my Tomb King collection. This model took me a long time to plan out, convert, and paint. In game I use him as Settra, which works out pretty well since he is so heavily based upon that model. There is a ton I could say about it, but since I did a five part series on him you can read about it here, here, here, here, and here. 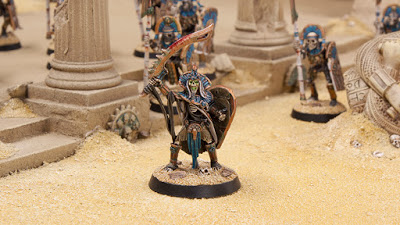 Now, even though I was able to finish a large majority of my Tomb King force, I still have a lot left to paint including a Necrosphinx, Warsphinx, Bone Giant, Tomb Scorpion, Horsemen, a few characters, and a bunch of chariots. Having said that I am pretty happy with what I have managed to get done. I finished the Tomb King above after I found a metal version of him at a local hobby shop about two years ago. With simple models like this, I still prefer metal to resin. You can read more about him here. 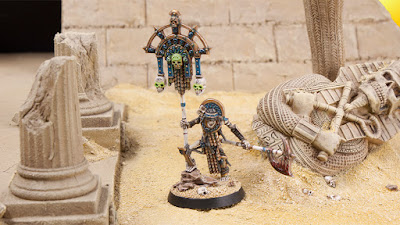 This Tomb Herald was the second character I had painted for the army. You can find the original post about him here. I was really happy with the conversion back when I made him, and he’s still one of my favorite minis in the army. The body is from the warsphinx crew, the ax from the Necroknights, the head and banner arm from the Tomb Guard, and the banner itself also from the warsphinx. This guy was featured on the GW blog a few years ago, which was also cool. You may notice his banner staff is a little shorter in the new picture compared to the older ones of him. I had him displayed at a local store in their cabinets, and unfortunately he broke somehow. The worst part is that the store tried to fix it on their own without telling me, and in the process just made the whole thing worse. Tof fix it I had to cut out one of the segments from the banner pole. 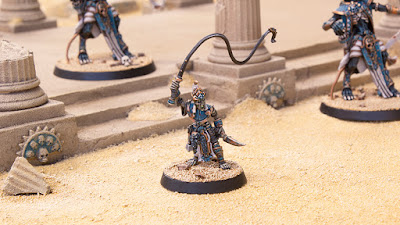 The Necrotect is the newest model added to my army, so I don’t have much to say about him that you can’t read in his own post. I will say that I ended up liking the model a lot more then I thought I was going to based on the pictures I had seen of it online. 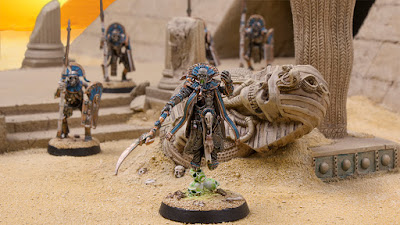 I’m particularly proud of my high liche priest conversion. I originally just made this guy because I had a bunch of left over parts from my Settra conversion and some miscast Casket of Souls sets. Something that had started out as a “why not” scenario quickly turned into another one of my favorite models. You can read more about him here. 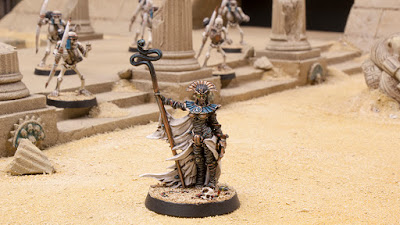 Khalida is not being used in my Adepticon list, but she is still a really cool mini. This is anohter one of those that I wasn’t to fond of until I had the mini in my own hands. My wife had gotten her for me for my birthday last year and she was particularly excited for me to paint it. It is pretty cool that it’s one of GW’s few female models that doesn’t try and super exploit her sexuality. You can read more about here here. 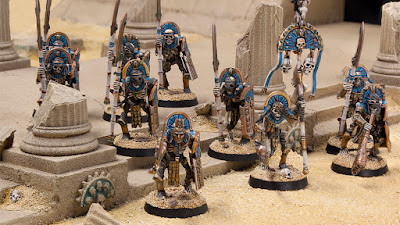 The Tomb Guard were the first unit I painted for my army back in 2011. I really liked these models, especially with halberds. I actually have 20 of them, but I have only rebased 10 so far. At the moment I’m thinking about converting three of the other 10 to be command models and run them in two units of 10 instead of one of 20. This way they benefit from their regen banner more. Here is my original post on them from back in July of 2011. 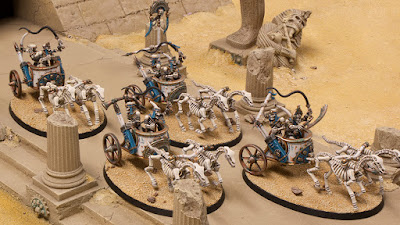 To me the most iconic model in the whole Tomb King range is the humble chariot. It’s one of the main things that first drew me to them. There’s just something so cool about visualizing a bunch of light chariots thundering towards the enemy. I painted the first three back in 2011 and added the fourth one just this past year. This is one unit that I definitely have to paint one at a time. Batch painting these would drive me crazy. I love the look of them on ovals and they are absolutely awesome in game in AoS as well. I have about 10 more of these unassembled to get to at some point. I would love to be able to run the chariot formation. You can read more about the latest addition to them here. 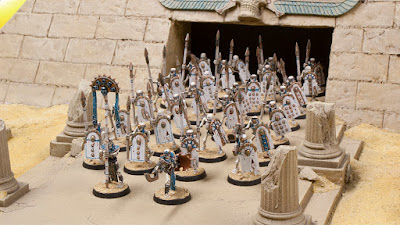 Oh the humble spearmen. Back in 8th edition they were largely regarded as the worst possible way you could equip a skeleton in a Tomb King army. I didn’t really care though, because I liked the look of the spears better. The skeleton kit only comes with some generic european style hand weapons which just look out of place to me in the Egyptian themed Tomb Kings. These were the second unit I painted, but I had only painted 16 of them since that’s what came in a box. I always planned on expanding them to at least 20, but never got around to it until Adepticon. With the bonuses they receive from increased numbers in AoS I decided to heck with it, and went for a unit of 30. You can find my post about their newest rank expansion here. 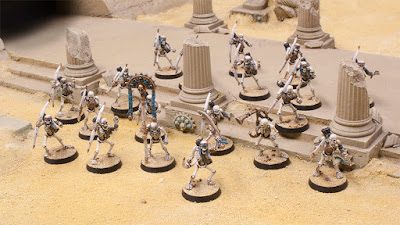 The archers were one of the last units I painted on square bases. They were a must have in any self respecting Tomb King player’s army back in 8th so I bought two boxes and settled on just making 20 to start with. They are also sadly lacking from my Adpeticon list since they don’t really gel well with the combat boosting abilities of Settra, but I surprisingly really like the models. Even though these skeletons haven’t ages very well, if you put the time into doing a really clean paint job you can kind of hide that fact. You can find the post about them here. 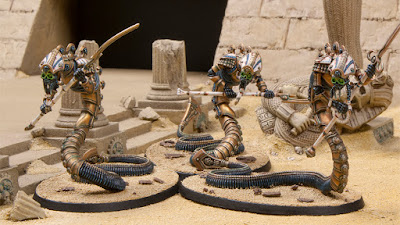 The Sepulchral Stalkers were another until I painted rather early one. I actually had just two of the three done for a few years before I finally got around to finishing off the unit about two years ago. These guys are definitely the weaker of the options you can build from their box, but I just liked the look of them so much more. They were the models I perfected my black marble and glowing eye techniques on. They looked okay on square bases, but I think rebasing them onto the new ovals has really complemented the models. You can find posts about them here and here. 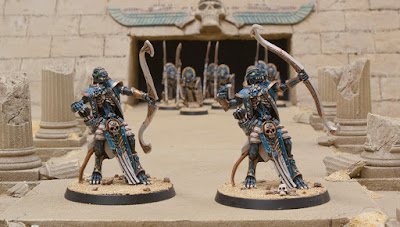 Ushabti are classic Tomb King models, and in fact, they are most likely the first thing a lot of people picture when thinking about this army. I started with a unit of Great Bow carrying Ushabti just because that’s what I had first. I have some Great Weapon ones waiting their turn still (they’re metal too), but first I will need to finish off the last guy for this unit. You can read more about them as well as see more pictures here. 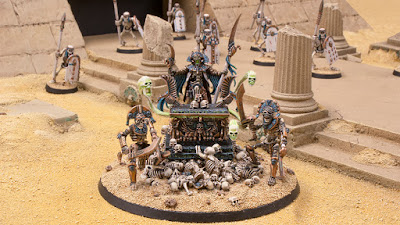 This Casket of Souls was really a labor of love. When I first bought it I had wanted to paint it up as my Golden Demon entry that year. Unfortunately this was right when Finecast started and it had a ton of imperfections. I ended up getting several rounds of replacement parts as GW customer service tried to help me. Each of these rounds all had the same imperfections, so in the end I decided it must just be a problem with the mold and not the casting and gave up on it for awhile. Once I did decide to finally start work on it I knew I wanted something special. The first thing was to replace the Casket Guard with plastic Tomb Guard to update the look a bit. The next thing was to make it look like it was in use. My first thought was to use the banshee models from the Mortis Engine, but I decided that wasn’t Tomb Kingy enough, so I went my own route. I did a whole series of articles on creating this which you can find here, here, here, here, and here. 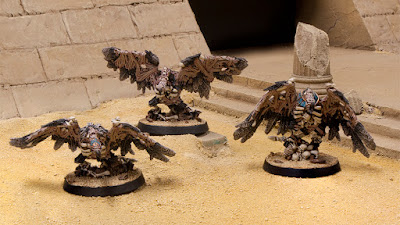 The Carrion models were not something I expected to paint when I started the army. They’re pretty dated and not the best sculpts to begin with. I picked up four metal ones on eBay though awhile ago for a steal and once I saw their new rules in AoS they got bumped up to the top of the painting list. These guys were the first minis I painted once I knew this was the army I was taking to Adepticon. You can read more about them here. 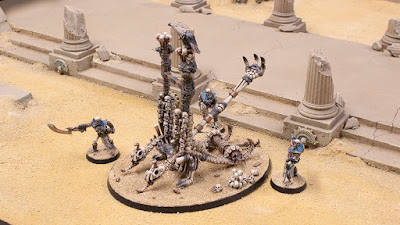 Yet another model I wasn’t fond of until I saw it in person. It’s a little cheesy, but it does look really cool once it’s painted. The mummies on the posts are my favorite part and I have another one unassembled at the moment I may paint in the future. You can read the original post about it here. 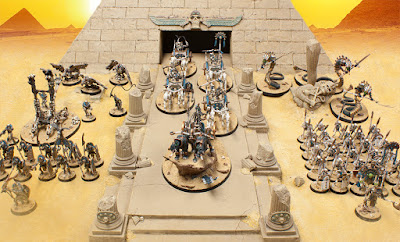 Last but not least, here is my assembled Adepticon force, ready to wage war in the Mortal Realms of Chicago. That’s my own display board, with a photoshopped background. I made it two years ago for Armies on Parade and took silver at my local store. You can read about how I built the display here.

Not one to do something only half way I also put together a special 28 page “army list” for Adepticon. I created a warscroll for each unit I am taking and tried my hardest to make it look like the official thing. I also took this as an opportunity to write a but of background for my army and the area of Shyish that they occupy, the Endless Deserts. My favorite part is the little short story on the last page of the lore. All of the unit pictures above were taken for this project as well and it has really helped me push my photography skills. All in all I am really happy with how it turned out.

This was a really fun project and I am really proud of the outcome. This is just the beginning though, more of a test run for the real thing in the future. All of the fantastic illustrations are once again from Kenneth Erickson, and having seen previews of what he has in store for the future you guys are in for a treat.

As a follow up I cam in 7th place out of 40 and my last game was on table two. All in all I am very happy with how my Tomb Kings fared at the tournament. 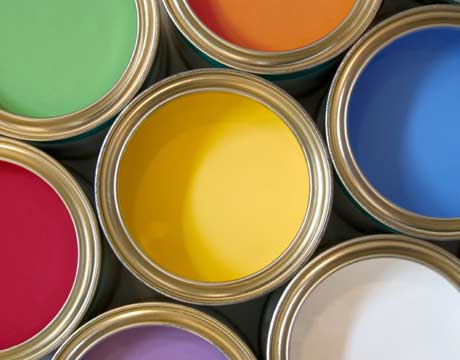