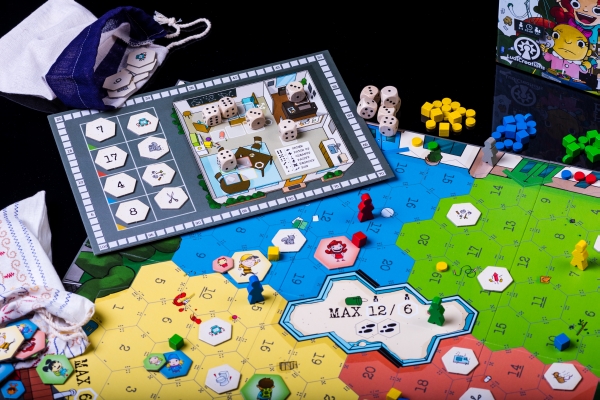 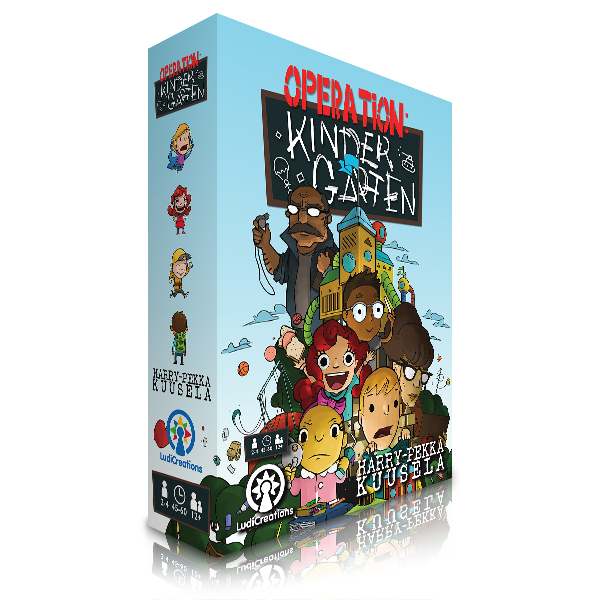 The Tabletop Spotlight is on Operation: Kindergarten from LudiCreations – can you survive recess?

Hey BoLS Readers – AdamHarry here with another board game that is both challenging and fun. Evan from Dragon’s Lair Comics & Fantasy brought over Operation: Kindergarten a game about herding children on the playground…It’s actually a lot more tactical than you might think!

This game takes place on the playground where 4 different classes (aka gangs of small children) are roaming around. Your role is that of the teacher who is trying to handle the kids during recess. You have to manage boo-boos, boo-hoos and the occasional pile of poo-poo. Kids, I tell ya! It uses an interesting dice mechanic to determine movement for the distance and the direction of the students. In some ways it’s like a tactical version of herding cats – only the cats in this case are small children.

The game pieces themselves are wooden and designed for lots of play, in fact, just about all of the extra playing pieces aside from the punch-out tokens are made of wood. It’s actually a really nice touch! The game is very colorful as each set represents a different class (or a gang as Evan put it) of kids. Some of the kids are older and some are younger but that really just effects the turn sequence when they move. I was pretty happy with the actual components and art style of this game.

There are also those punch-out tokens I mentioned. Most of them represent hazards on the playground. They range from rocks and sharp objects to even a pile of poo. The teachers have to go on clean-up runs to keep the kids safe. Winning the game is based on who can collect the most points which is morbidly based on how many of your students you can get back to class. It’s going to take a good bit of luck, quick thinking and some disinfectant to win this game! 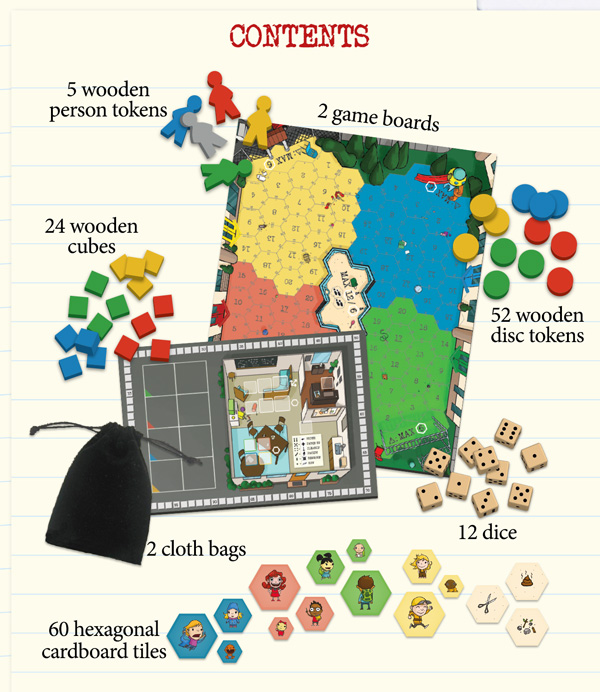 Overall It does look like a fun game and the components are all well made. The Rules are pretty easy to follow and because of the random nature of the kids and their movements, every game is going to be different. So if you have ever wanted to experience herding cats and guiding small children then check this game out!

In the grim world of kindergarten, where juice is the fuel of chaos, where the playground is the ultimate arena, where the struggle against tantrums is real, the teachers, the guardians of order remain ever faithful, ready to jump in and take the ball away, if they have to.

While the situation in the battlefield appears calm, hostilities may break out at any moment. The yard remains rife with dangers, and the tribes of kindergardeners shall be unleashed upon each other any minute now.

Who will prevail in the ultimate battle between light and darkness, between order and chaos, between disinfectant and sharp objects? 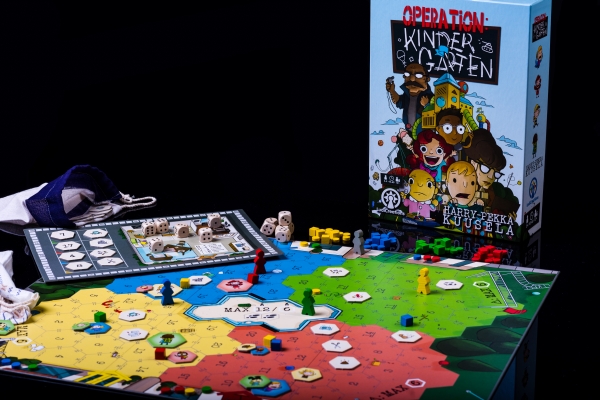 In Operation: Kindergarten, the players are teachers that are trying to keep children safe, and return them to their classrooms – and they will not stop at anything to do so, including disrupting their fellow teachers’ routines.

Using a dice placement mechanism, the players direct the movement distance & direction of children, affect where the retiring head teacher will be inspecting next, and decide on their own movement and actions throughout the day.

Teachers deserve a raise because kindergarteners are terrible.