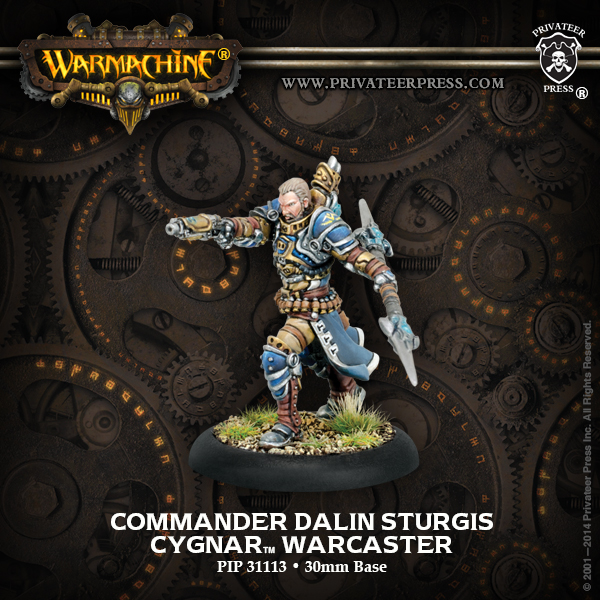 The first cross-faction warcaster, today we look at the Cygnar side of Commander Dalin Sturgis.

The first cross-faction warcaster, both Sturgis have a similar flavor to them just one is more buff oriented with snipe and arcane shield and the other more debuff with parasite and dark shroud.

Sturgis got some model updates for both versions of him.  Lets take a look at what makes him tick for the Swans.

With chain attack flash and teleport Sturgis can get in and out of all kinds of fun situations.

Chain Attack Flash: This is a fun ability in concept but not very useful in practice. Finding a useful model that is within 3’ of a caster that can take two power 13s isn’t going to happen if your opponent is smart. It can be useful for softening up a target moving three inches back and then teleporting away for a long yo-yo though.

Reversal: at defense 16 your opponents can miss and that stalker that just charged in and whiffed is now smack on his butt wondering what went wrong.

Snap Strike: Double the attacks for the focus. 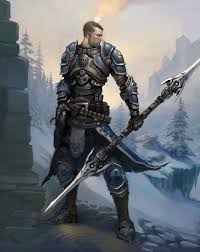 Sturgis’ offensive spells are kind of lack luster I would focus more on handing out his two buffs and using his teleport yo-yo.

Arcane Shield: +3 armor sign me up. Great for Hammer dwarfs that go well with him or storm lances.

Convection: Just a bad spell, focus inefficient spend 2 to get 1 never been a fan of this on any caster.

Lightning Storm: Cute but a pow 10 aoe that costs half your focus stat just doesn’t seem too appealing to me. It does have one use with the feat for some pushing to death fun!

Snipe: Ah Cygnar who doesn’t have this spell why not add range to their already incredible arsenal of ranged attacks. This one is also extremely useful later when outlined with the feat allowing you to place your covering fire farther.

Teleport: This spell is a ton of fun walk up take your hand cannon shot and hide behind wall afterwards or a building would be even better. Or after your charge and second swing combine this with Chain Attack Flash and you get yourself right out of the action.

DOA (Dead on Arrival) a cool name for a fun feat. Push all models in the control area towards Sturgis any within 3 of Sturgis take a pow 12. I have used this one of two ways. First is to charge in feat and teleport out trying to net an extra couple of focus for my stormwall and bringing things in range of its big guns. The more creative way but sometimes difficult to get rolling is to bring a couple of cyclones and a stormwall with B13, placing their AOE’s in strategic places and feating to push models to their doom!

What do you think of the Swan Sturgis?  Have you played him?  Please share your comments below