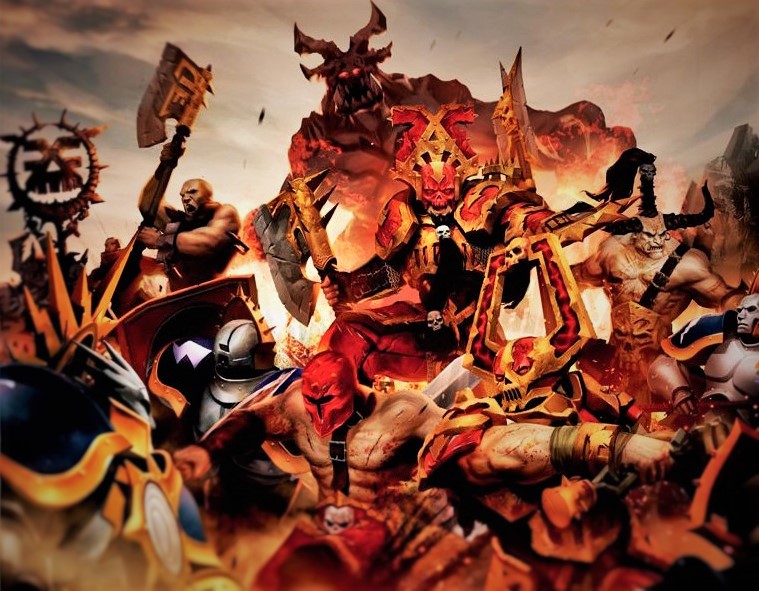 With the General’s Handbook in-tow, AdamHarry busted out his Chaos Warriors for an AoS Throwdown!

Hey BoLS Readers! AdamHarry here and I recently got some games in with the new AoS General’s Handbook army lists & construction rules. After getting some first hand experience with them and some games under my belt, I thought I’d share my experience. The army I played was my Warriors of Chaos aka Slaves to Darkness.

I’ve mentioned this before but list building is super easy and familiar. As a long time 40K player, I really like the army construction chart. It’s a force organization chart – key word “organization” – which I still feel is what AoS needed. It’s really nice to go up to my FLGS on Warhammer night and say to another AoS player “Hey, would you like to play a 2000 point game?” Everyone is on the same page and it’s great! 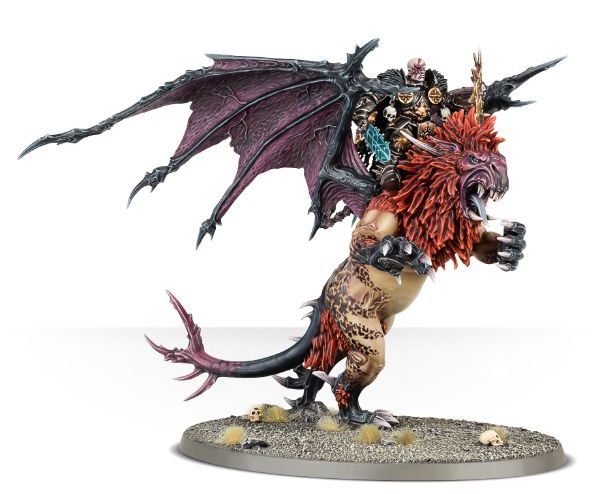 I’m sure that this will vary based on your local scene but players are taking monsters and it’s great! I saw all kinds of big, beefy monsters running around on tables. I ran a Chaos Lord on a Manticore against a Dwarf list with a Flame Cannon and regular Cannon and he didn’t get shot off the board in 1 turn. Actually, he eventually died in close-combat after demolishing a line of Dwarf Clansmen – it was awesome. The point is that while yes, you can fire into close combat, close combat actually happens! With MONSTERS! It looks very eye catching on the table and makes for an epic looking game. 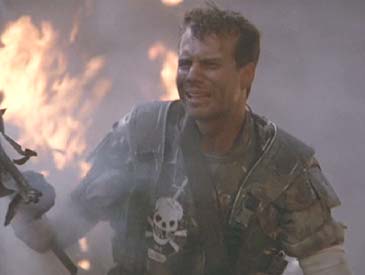 …But I’m okay with it. If you’re not familiar how it works – let me explain:

“At the end of combat, for every unit that lost at least 1 model, roll a d6 and add the number of models they lost to the roll. If that number is greater than their Bravery value pull that many extra models from the unit.”

It was strange at first because I was trying to wrap my head around it. Coming from a heavy 40k background and WHFB I’m familiar with Leadership checks and units breaking. But that’s all based on wounds and not models. This can make some units very tough to kill and some units evaporate off the board. Units made of Multi-wound models can be punishing to break but when they start losing models due to battleshock it can really sting.

I think that’s reflected in the points cost for a lot of units as well. I’m sure there are some winners and losers in terms of points efficiency but, because we’re all still exploring these points together, I don’t really mind. It’s nice to come together as a community of players and figure that stuff out.

Paying Points For Battalions Is A Good Thing 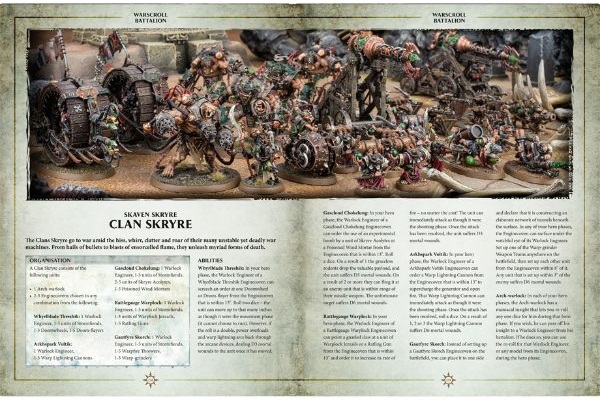 40K players, we’ve all seen the rise of the Formation – well Battalions are the same thing, only in AoS you pay for them. The point cost is minimal with most of them running under 100 points. I hope as new Battalions come out Games Workshop continues to apply a point cost to them. Getting more “free stuff” just because you’re using a data sheet for the same army might be a way to sell more models but it can really break the game on the balance side. At least getting charged points for running the Formation/Battalion helps to mitigate some of that.

Command Abilities – Use Them

Holy Cow, use those Command Abilities. Your Heroes cost those extra points for a reason and that reason (besides extra wounds) is the command abilities! Specifically your Army General will probably have a Command Ability but ALL General’s have the “Inspiring Presence” ability which will let one unit within 12″ ignore those pesky Battleshock tests. 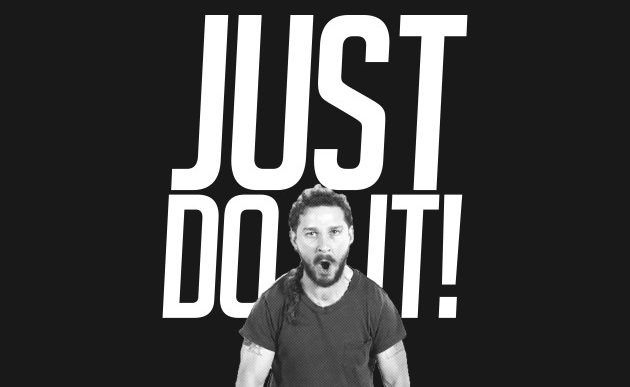 That makes units of multi-wound models even tougher to uproot but it can also make those super cheap units annoyingly difficult to kill! Need to hold that line? Use Inspiring Presence! Some armies also have ways to let the non-General Heroes use their abilities. That can really help you turn the tide. And hey, you paid the points for them so why not use them!

This is something that has been hotly debated. Having to set aside points for summoned units really is a double edge sword. On the positive side, you’ll be able to drop a unit of summoned “things” right where you want them at a possibly pivotal moment. On the other hand it’s a roll and thus can be failed. And then your summoner can be killed. Which means all those points go to waste. Protect your summoner, people! 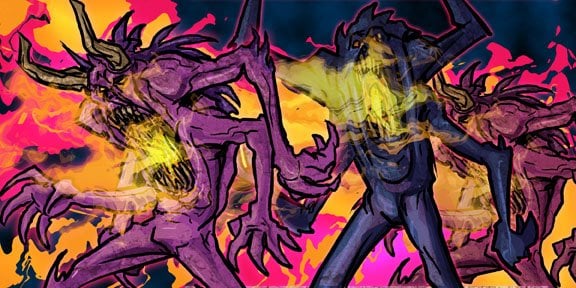 This can certainly reign in those armies that are built around summoning free units. And by “reign in” I mean complete negate them. Personally, I’ve seen it get out of hand very quickly (looking at you Chaos Daemons in 40k). Fortunately for Age of Sigmar that is addressed from the get-go. It’s basically Deepstriking but more random. If you don’t like it then just deploy those units, problem solved.

Combined Arms Armies Are Back

Ranged units are generally more expensive than non-ranged units. Why is that? Because shooting will happen during the shooting phase. If a unit has a shooting weapon attack, they get to use it during the shooting phase. Period. That includes units that are currently in combat. Did you charge that cannon hoping to tie-up the crew? Well I hope you blocked the cannon too, because unless you blocked their LoS they will totally fire that thing at something. 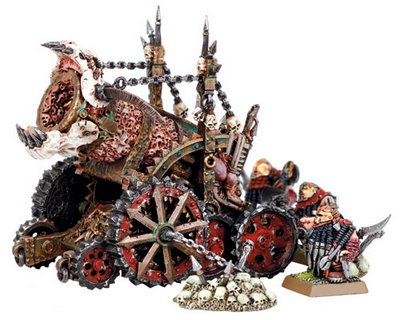 Ranged units can also fire INTO an ongoing combat. As long as they can see the unit they can shoot it. Suddenly having effective screening units, using cover and terrain, or getting to those ranged units becomes a priority. It almost sounds like you have to play tactically or something. It’s weird, I know – but that’s just how it works in AoS. If you know that going in, you can prepare for it. And you can do it too.

There are still things I’m learning about the units, points and army construction. Until I have everything memorized, I’ve decided to print out my units stats on some index cards. I have the app and it’s great for looking up rules and the books are also handy – but having some “cheat sheet” cards will make it a lot faster in the meantime.

Right now is a really exciting time to go exploring in Age of Sigmar. The army construction framework makes list building a breeze and points are basically all increments of 20 so the math is easy. I’m having a blast trying out stuff I thought I’d never get to use – everything is an option in my army right now because I’m in data collection mode right now. I’m sure I’ll become more picky (aka jaded) overtime but right now it’s all new and shiny! And I’d like to keep it that way for as long as I can.

Have you gotten poke around with the General’s Handbook and the points? How have your games been so far?