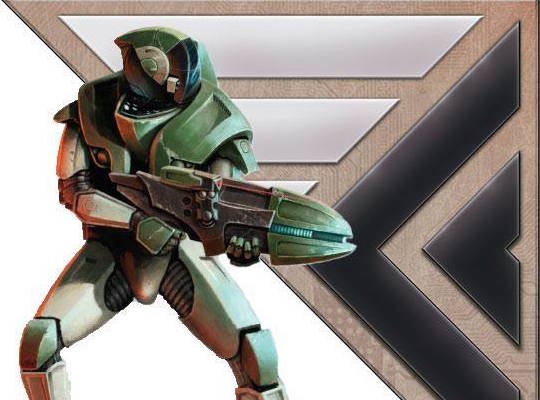 Warlord Games walks you through a Starter Force all the way to a full sized army!

“I’ve bought the Xilos Horizon starter set – how should I assemble the models?”

“What should I arm my models with?”

Seasoned Antares veteran, and regular contributor to the Warlord Newsletter, Tim Bancroft is on hand to offer a little advice… The Concord Combined Command in the Xilos Horizon starter set make up a pretty decent force. Apart from Kai Lek Atastrin – who is a potent command addition for just 21 points – you get 20 troopers, four C3D1 drones and a host of spotters. That means you can field a rather tasty three strike squads, all with plasma lance and spotter drone plus a command squad that can take a lot of punishment. There are options, too: the strike squads can be upped to six troopers apiece or the command squad can be maxed out.
And then…

…You have the D1 drones. Probably the best way to build these is to have three C3D1s with plasma light support and one C3D1/GP with a subverter matrix. Even here there are multiple options if you don’t mind a bit of customisation: the spare subverter matrix arms make really nice ‘projector surfaces’ for a batter drone if attached to one of the spotter drones (see image below). The three weapon drones can be fielded as a single unit or as three separate units, depending on how many dice you want or how many support options you can take. Leader 2, slingnet and plasma grenades (for hand-to-hand) on the Strike squads adds 75 points in total; adding self-repair on the drones is another 30 points; and giving slingnet and plasma grenades to the command squad adds another 15. That’s a total of 967 points without thinking too hard and leaves space for some Army Options, perhaps ‘Get Up’ and ‘Superior Shard’.

At this stage the problem is not expanding the C3 but cutting them down to make a 500- and 750- point force!

Reducing the points value can be done quite quickly: dropping two troopers from Kai Lek’s command squad and leaving out the subverter matrix GP drone gives a nifty 747 points with 6 order dice – not bad for the C3. Alternatively, turning the command squad into another strike squad saves 50 points and gives the option for a ‘Get Up’, still with 6 dice.

The difficulty comes with pulling out a 500-point force from the choice on offer. I quite like the strike squads with a plasma lance as it can put pins on a Ghar suit and the spotter helps alleviate the inaccuracy of the lance. A solid base is to run with three strike squads and then sort out the rest. Of course, a fourth strike squad would be simple, but the batter shields are useful, so I’d try for at least one of the C3D1 combat drones with a batter drone and probably a spotter, leaving 36 points. Four units, and we could get a GP drone for the extra dice and still get that useful ‘Superior Shard’; what’s more, the batter drone could be attached to the GP drone if we wanted mobile protection for the infantry.

An easy alternative is to replace one of the strike squads with Kai Lek and the command squad. It only eats up 6 points but gives a pretty resilient unit and we’d still have 10 points for army options or upgrades.

We could go on but… you get the picture. It’s a really flexible package But upgrading from here is an interesting conundrum. Whilst we could make a 1000 point Combat Force without trying too hard, we are missing some tricks at that level. The decision, however, is now based on personal preference: how do you, as a player, prefer to play? How do you envisage your C3 force?

As an example, two relatively straightforward options for the C3 come to mind really quickly: fast or hard. The C3 have access to some potentially very fast troops, have ready access to the hard-hitting plasma weapons and also have the imposing and already-available X-Howitzer.

For now, let’s go the hard route and go with the X-Howitzer. The net ammo is an obvious choice being cheap and effective. As we want to protect this strategic weapon, a batter drone and Leader 2 are obvious upgrades to bring the cost to 145 points. To maximise effectiveness of such a core weapon, the targeter drones are necessary to get rid of those negatives: I’d be tempted to go for all six. This brings our core, heavy-hitting combo to 175 points – not bad for the effect it will have.

At 1000 points you really have to consider that around 500 will be core infantry and four dice, leaving 500 to play with. That means we still have 325 points. We can’t have any more strategic units (that M4 would have done nicely!) but we have four support slots to fill. One or more C3D1 drones are an easy, highly effective option but we might also want to take a Plasma Cannon in the shape of a C3D2 drone at 98 points or a support team at 75, or an X-Launcher (though the Concord only have the X-Launcher and D2 as of writing). To either we might want to add batter drones and would certainly need spotters to give the single-shot weapons a second chance.

We could take both the C3D2 and an X-Launcher and adjust some of the other options to give us a hard-hitting, 1000-point Combat Force with 9-10 dice. Moreover, the core of the 1000-point army has come straight out of the starter box!

It’s worth noting that even if we chose the ‘fast’ option, an effective force is easily constructed from a squad of interceptors with compacted plasma cannon and spotter (for that extra zing), a drop command squad and a drop squad. Moreover, if we downgraded Kai Lek to a normal commander, we could still pull in those useful targeters within the points limit and end up with eight order dice, still using much of our original force.

The last 500 points in our hard-hitting, 1500-point Offensive Force is relatively straightforward. The M4 is an obvious choice but would need a batter drone, at least, for 269 points – and its spotter and batter drones come in the box. We have to take another infantry squad, but the strike squads are pretty good, anyway. For out last 100-odd points we are a bit spoilt for choice: an extra support team with X-Launcher or another C3D2 would be nice but, in reality, we could use all our C3D1s in separate units to put pins on any Ghar or heavy weapon drones we might face.

What we end up with is a 1500-point, 14-15 dice, hard-hitting Offensive Force that uses almost everything in the starter box. To that core, we’ve added the X-Howitzer, the C3M4, targeters, a C3D2, perhaps an X-Launcher and another infantry squad. We might also have to buy a pack of drones for the batter drones. Nonetheless, we can now have a strike squad on guard duty near the howitzer, have plenty of spotter drones around the board for that OH patch sighting, and have a number of hard-hitting, roaming units to boot.

And all based around the contents of the Xilos Horizon Starter Box! Getting started with Gates of Antares has never been easier – What’s your take on Warlord’s Sci-Fi Game?