The Tabletop Spotlight is on Fury of Dracula – The Classic Board Game from Fantasy Flight Games & Games Workshop!

Hey BoLS Readers! Have you ever wanted to be a Vampire Hunter? Perhaps you wanted to BE the Vampire? If you’ve ever been inspired by Bram Stokers’ Dracula then do my friends over at Dragon’s Lair Comics & Fantasy have the game for you:

Fury of Dracula is a game for 2-5 player in a 4v1 scenario involving Vampire Hunters and Dracula. It may seem like the players have a huge advantage but Dracula has more than a few tricks up his sleeve to even out the odds. The game takes place in Europe and the entire map is the playground of the sunlight averse Dracula. And speaking of maps, it really is very impressive once you see in live! 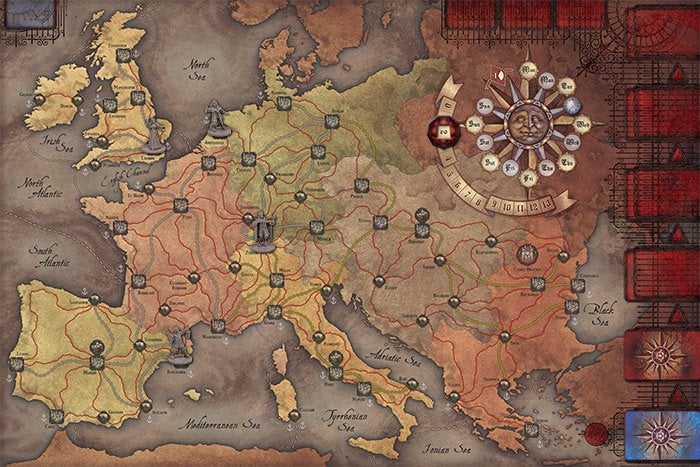 Each of the vampire hunter players takes on the role of one of the unique characters in the game. Each one brings a very useful skill to the table and if all the players are able to gang-up on Dracula then he will probably bite the dust, hard. However, there is a lot of ground to cover and it’s a race against the clock. The Players have to split up if they want to find his trail but if they get too strung out they become easy pickings for Dracula and his goons.

Gameplay wise the game is divided-up in a day and night cycle. The players can take actions during their turn and then Dracula preforms his action. This keeps going until Dracula has completed his goals, the players track him down and kill him or die trying in the process. Along the way Dracula’s leaving a trail of lairs, traps and misdirection so it can be very challenging. Dracula’s moves are also private – he has a deck of cards that the player uses to track his movement. Those cards are placed face down on the track to the right in the picture of the map.

It’s a very fun and challenging game! If you really want to test your mental mettle against your friends then you should look into this game. It’s really well done – the art is also fantastic! Naturally there are lots of token, decks of cards, and plastic miniatures, too. It’s a combined product from Fantasy Flight Games and Games Workshop so you know the quality is going to be there. Games can take 2-3 hours so you’re going to get your money’s worth on with this one for sure. Fury of Dracula is in store now, so go check it out already! 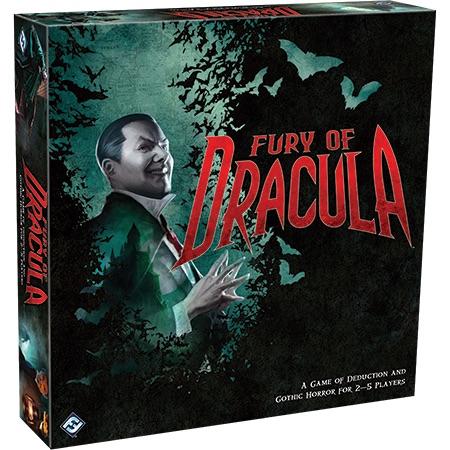 The most notorious vampire of all rises again in this third edition of Fury of Dracula, a board game of deduction and gothic horror based on Bram Stoker’s classic novel. One player takes control of the legendary Count Dracula as he stealthily crosses Victorian-era Europe, spreading his diabolical vampirism everywhere he goes. Up to four other players govern Mina Harker and her determined companions as they try to locate and destroy the fiendish Count before he plunges Europe into horrific darkness. But in this heated game of cat and mouse, the hunted prey may also be preying on his hunters. Any day’s travel might bring the hunters to Dracula’s location. On any night the Count may attack.

This edition features all-new art and graphic design crafted to complement the game’s intuitive, thematic mechanics. Rounds are now broken into day and night: hunters take actions during both, but Dracula can only act at night. Combat is now more streamlined and decisive, and new rumor tokens allow Dracula to mislead hunters and extend the terrible reach of his influence. Count Dracula triumphs if he advances his influence track to thirteen; if the hunters can defeat him before then, they save the continent of Europe and win the game.