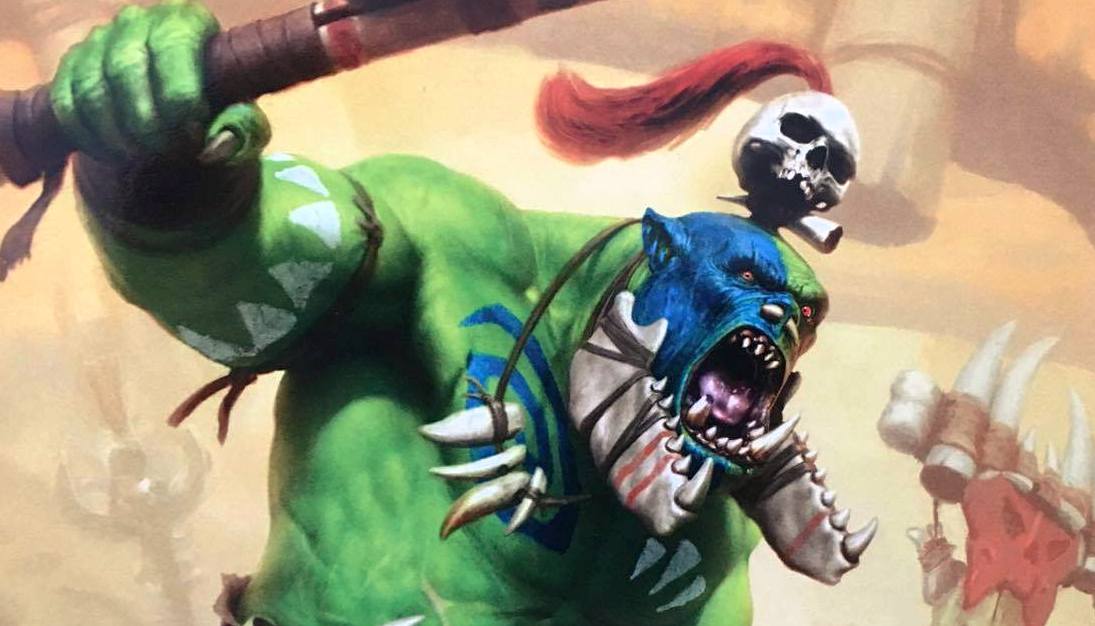 RUN! Because these Orruk’s are killing e’ry body up in here- especially your monsters!

Battletome Bonesplitterz is here and the Orruks are coming in savage! 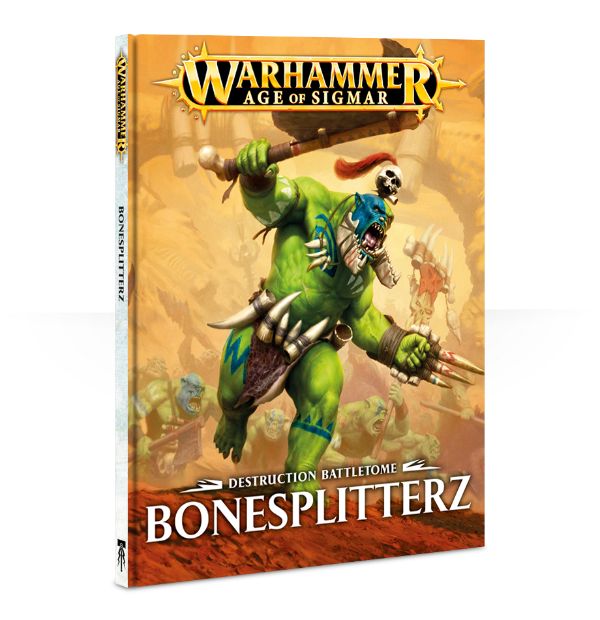 This is second new style of battletome which has come out after the General’s Handbook and includes things like Artifacts and unique allegiance abilities. It adds 6 warclans, and 8 new warscrolls all in a 110 page book,

There’s a few tweaks versus the Grand Alliance: Destruction book like the savage Orrucks are split up into three different units, the boar boy’s and split up into two different units. You’ll want to go over your troops, they’re all pretty good, this army was good in fantasy and it seems even better now.

It’s got a lot of unique flavorful abilities that I really like. 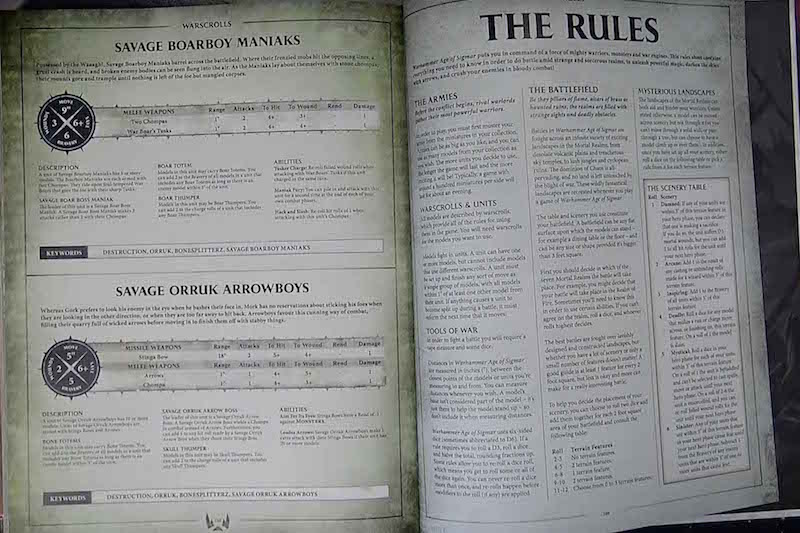 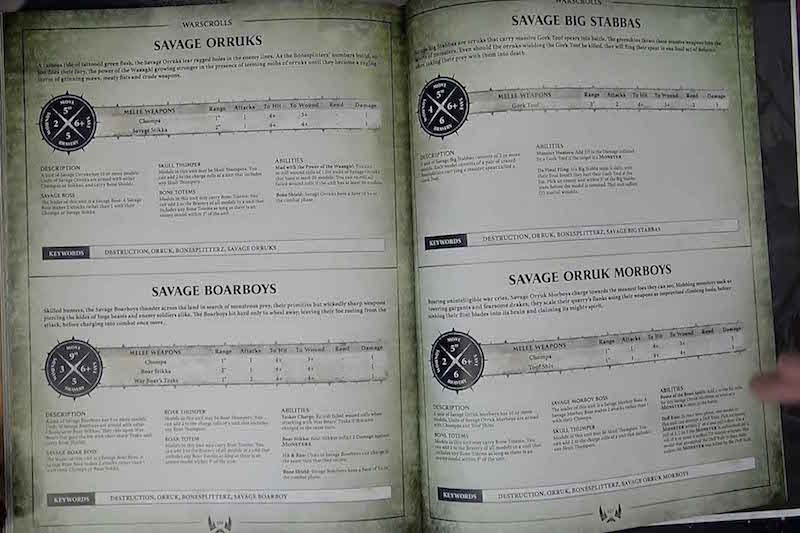 Pro-Tip: If you’re not using the app yet, you need to check it out.

Now, to the allegiance abilities, they’re pretty solid. War Paint means you successfully pass a save on a 6 regardless of rend modifiers. Then, and this is a big one, they can save Mortal wounds on a 6 as well. If they kill a monster in a turn they ignore battle shock tests until the next turn, oh, and then they get to roll on the boon table which can give them more pile in range, mortal wounds, or re-roll failed wounds. 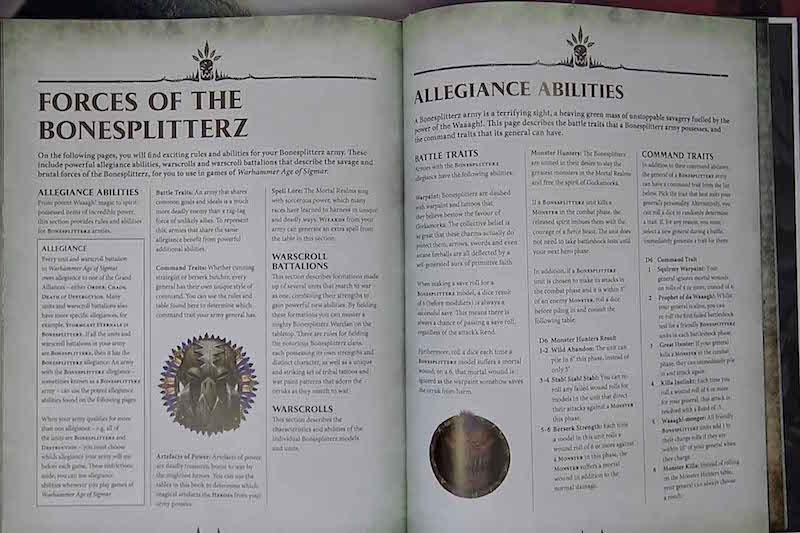 The command traits, again you can pick or roll are solid, one is letting you save mortal wounds on a 4+. You can re-roll failed battleshocks, Pile in again after killing monsters, -3 Rend, and then getting to pick your monster killer boon trait. They’re all pretty good.

Again, like the Sylvanth the Orruks get their own unique spells as well: Waaaaaaaaagh! 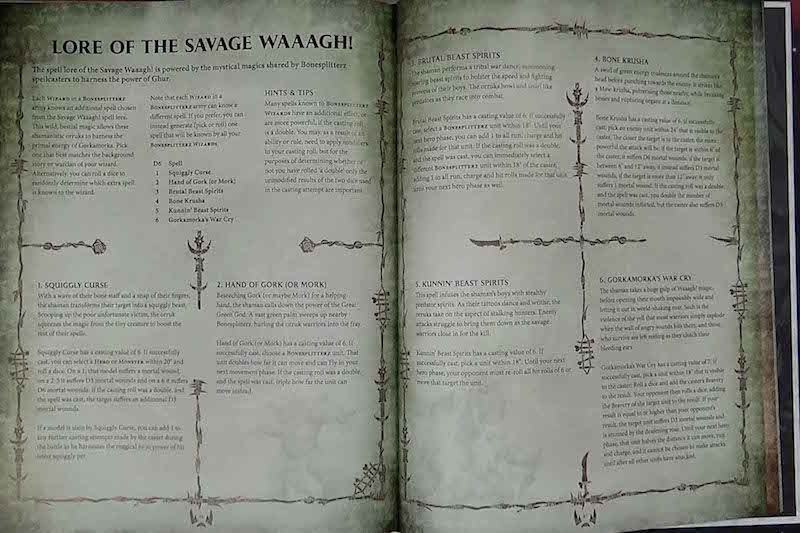 Note: you can get bonus, but you have to roll doubles without any modifiers.

These all have a casting value of 6. 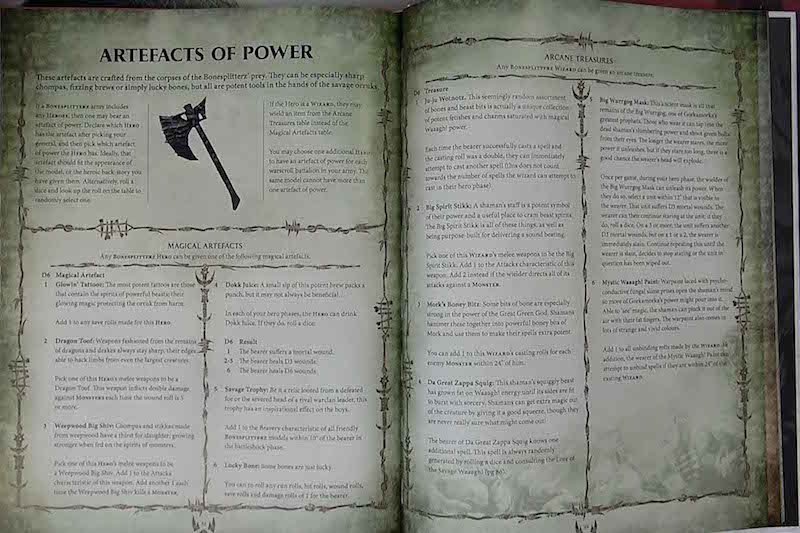 Artifact’s are for Heroes, they’re all pretty good but big ones in the Artifact’s, in my opinion are the Dok’s juice which heals up to D6 wounds and the Lucky Bones which lets you re-roll ones on run, hit, wound, save throws.

The Big Wurggog Mask is fun, pick a unit, it suffers d3 mortal wounds. You can keep staring at the unit and unleashing more damage until the unit is gone but if you roll a 1 it kills you.

Pro-Tip: If you bring a battalion you can set up the entire battalion in one go, you don’t have to lay it out unit by unit. This is good because you have the option to try and control if you go first or second based on how many war scrolls you bring.

Savage War Clan: The Warscroll ability is no joke, you can re-roll all failed save rolls but they only pass on a 6. THEN you can re-roll the war paint save that saves mortal wounds. Barebones, this is a 1700 battalion. So, there’s that.

The Teeth Ruuk, is kinda cool, these guys will kill monsters dead, and they get to pile in 6 inches as if it were the attack phase and then attack again in the combat phase. If the mortal realms are teaming with monsters they won’t be any more because the Bonespliterz are killing them all. 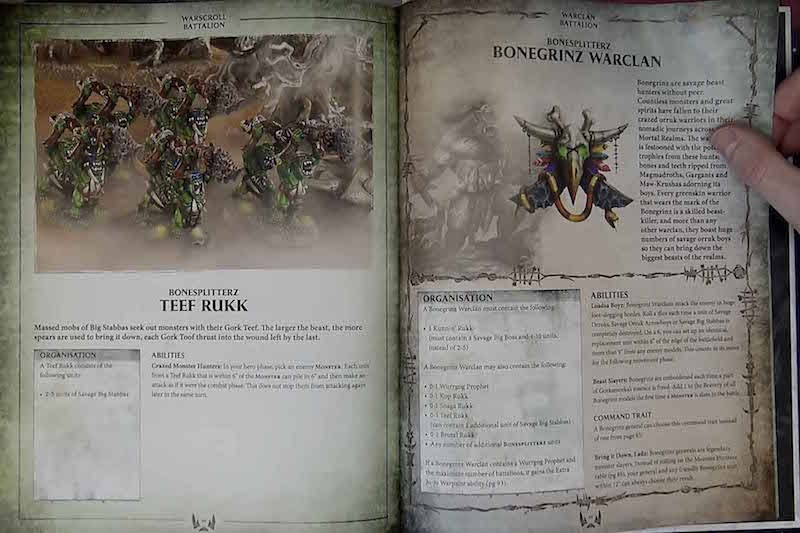 Then it’s the War Clans that are SUPER battalions. Remember, each Ruck will 300 points of each warscroll, but then you need to take some extra stuff so you’re getting really close to 2000 for just one of these but they give you lots of unique flavor. 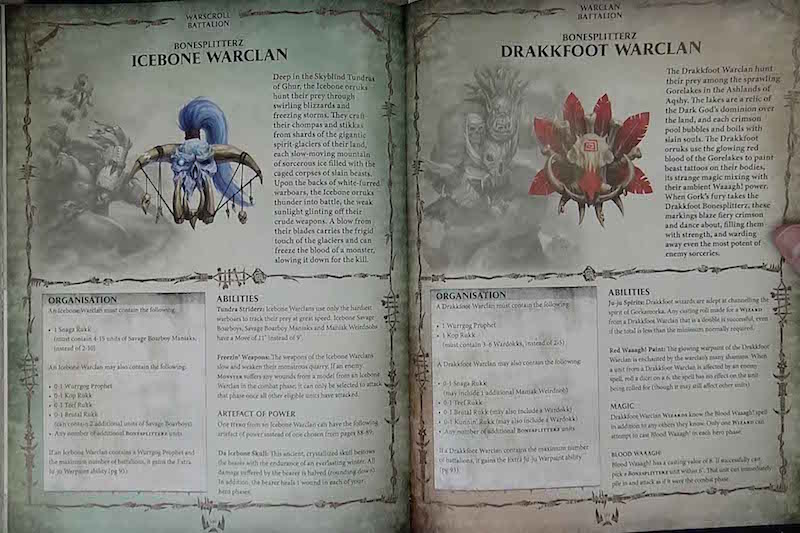 One thing to note is that there’s a lot of book keeping to be done but in my opinion it’s totally worth it because they have a lot of great abilities.