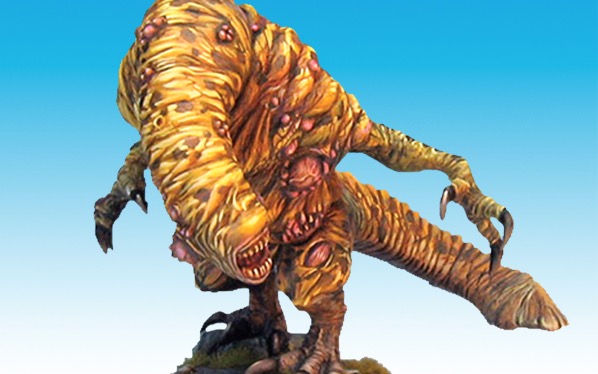 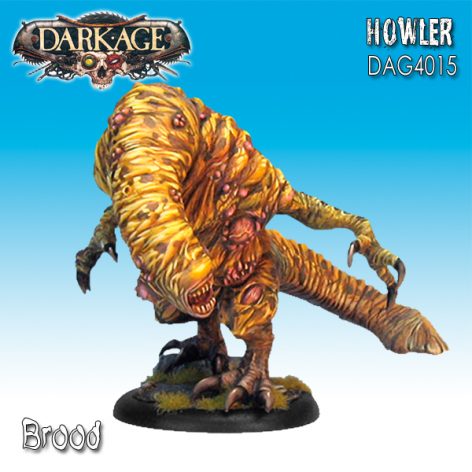 Let’s look at another one of the factions of Dark Age. Time to learn all about the Brood.

Samaria, the far away planet that serves as the setting for Dark Age, was chosen for habitation specifically because of its isolation from the rest of human space. Its locale made it the perfect place for corporations to hide their illicit research from intergalactic law. The fact that the genetics corporation IBC chose to set up shop in Samaria’s even more isolated southern swamps speaks volumes about the nature of their experiments. At some point in the far future, the manipulation of the human genome once again became taboo and any relevant study illegal. A few laws weren’t going to get in the way of IBC’s profits though. Many of their goals may even have been laudable, but we’re not really interested in breakthroughs in medicine are we? 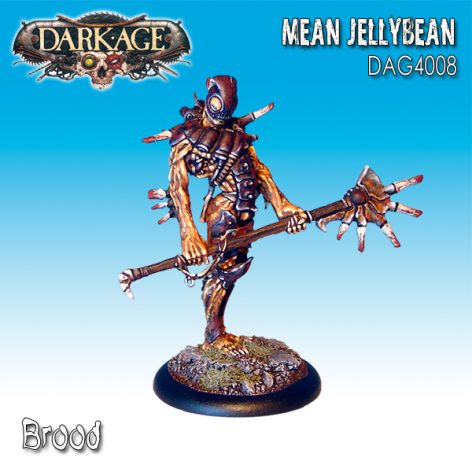 No doubt you’ll be shocked to learn that IBC’s primary goal was the creation of a super soldier army. Using DNA harvested from species from countless worlds, they created a specimen instilled with superior strength, resilience, and speed. Codenamed MJB the creature’s temperament earned it the nickname Mean Jelly Bean. But IBC wanted more than just a simple soldier. Prototype HLX, who would come to be known as Helexa, was the brains to MJB’s brawn: a specialist in tactics and logistics. But the picture was still incomplete.

The ability to coordinate troop behavior at the speed of thought has surely been a dream of commanders since the dawn of war. IBC’s greatest experiment was to make this a reality. Their final specimen, HM1 would have mentally linked the minds of thousands of troops across the battlefield. But before it could finish gestating, the economy of the United Worlds collapsed. The IBC was kinder to its employees than many corporations, and actually withdrew all of them from Samaria. But not before they hastily attempted to conceal their experiments by dumping the contents of countless maturation tanks into the swamps. Along with them went HM1. Malformed and distraught, it sought out MJB and HLX with the psychic link engineered into all their DNA.

Alone on a hostile world, the trio made themselves at home in the abandoned facility, learning whatever they could from the computers they found there. This might have continued until the power reserves ran dry, but HM1 began to experience a distressing sensation from the surrounding swamps. IBC had dumped tremendous amounts of raw genetic material and bio-stimulants into an ecosystem that already had its share of peculiar properties. The result was an artificially accelerated primordial ooze, with new abominations crawling forth by the minute. Each of these creatures shared the same genetic link to HM1, and it could feel the agony of each of their deaths. It proved unbearable. After intense study of the IBC archives, HM1 hatched a radical plan. With Helexa’s help it altered its own DNA to allow itself to physically bond with the swamp’s ecosystem hoping to control the tide of birth and death. 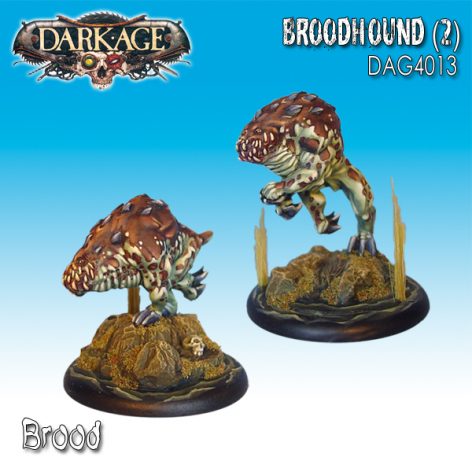 This was no easy task. HM1, which had now taken to calling itself the Brood Mere, spent years submerged before she could exert a significant amount of control on the DNA of the tiny lifeforms under her charge. As the years turned to decades, she became capable of creating independent creatures that could survive on their own. After a century she was able to begin controlling their forms. Perhaps still instilled with imperatives from her original purpose, the Brood Mere began creating all the pieces she would need for an army. She had the DNA of thousands of species to suit her needs. 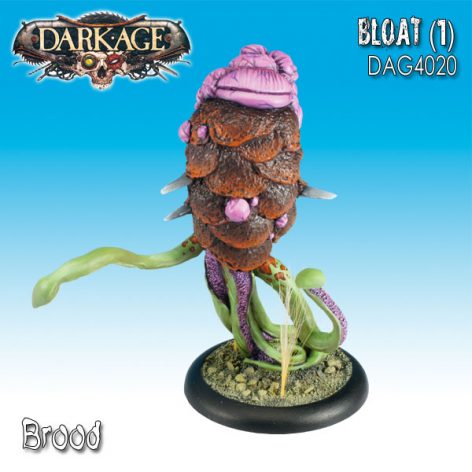 The Broodmere’s numerous creations make the Brood the most diverse army in Dark Age. Their troops range from the diminutive yet numerous Puds, to the mighty Howler, to the truly bizarre Bloat. These creatures are led by none other than Mean Jelly Bean and Helexa, powerful characters which have nonetheless had to be cloned a few times over the years. Murtros is another option, created by the Broodmere for a different battlefield role than her original two companions. Here’s a link to all the cards so you can have a look at them. All the rules and cards for Dark Age are always free to download.

The Brood can place their share of counters with successful melee attacks, like Paralyzing Poison to run your opponent’s models out of AP, or Acid to cause extra hits. They also seem to have a healthy amount of attacks with power multipliers, although these are often low PW. Of course the little subtleties aren’t what really set the Brood apart as a faction. 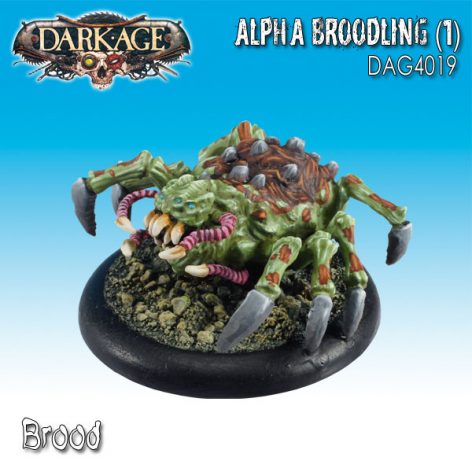 One important Brood trick is the Biogen ability. Models with this ability can take a number of free upgrades equal to their Biogen stat. Restricted to characters and Alpha Broodlings, Biogens offer a very diverse range of abilities. Some grant ranged attacks which could Blind an enemy, or pull them towards their attacker. Some help friendly models, allowing them to hand out an extra AP or grant cover to models behind them. Regardless of their specific purpose, they allow a Brood player that much more customization to ensure a winning battle plan. 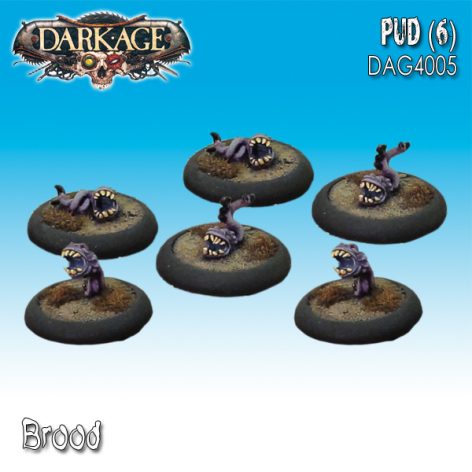 The Brood also have Puds. Certain Brood models have the Pud Control ability, and tiny little creatures called Puds will follow them to the battlefield. These Puds don’t cost any points, although it can be assumed their cost is covered in the points of the model with Pud Control. Their statlines are pretty pathetic, but you can end up with a lot of them, and they do cause wounds from time to time. While they only have 1AP, they are fast, and can be activated an additional time by their Pud Controller. Otherwise they activate after everything else. While this might sound like a disadvantage at first, it means they all get to go at the same time making it hard to react to them. 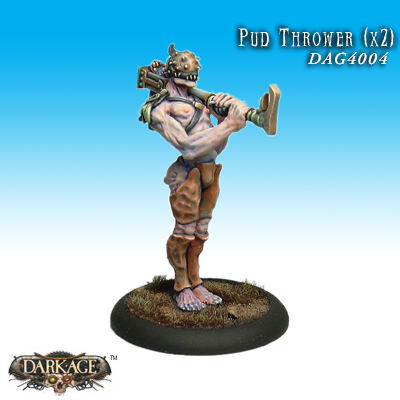 Then there are the Pud Throwers, which actually hurl the Puds across the battlefield. The puds get a free attack when they land, and perhaps more importantly are spared the trouble of having to walk themselves across the battlefield. What makes them so useful is that they can put enemy ranged units in melee making them unable to shoot without wasting AP first to disengage. A nasty trick to be sure, but the Pud’s greatest strength is one that the entire faction shares.

The Brood’s best trick is the Regeneration ability on every single model. This means it’s not enough to run a Brood model out of wounds. It has to be damaged one more time or it will heal itself and get back up again later. Larger models which aren’t finished off will just keep healing every turn until something manages to kill them, or the game ends. 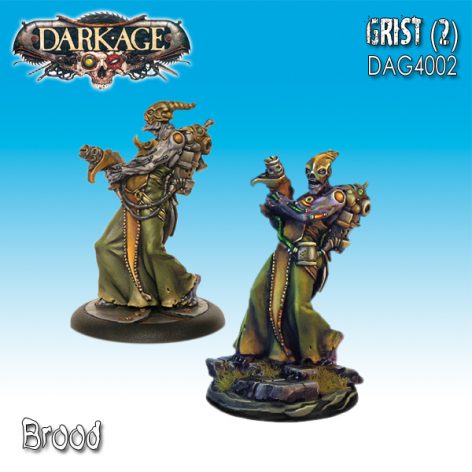 Most factions in Dark Age also have sub-factions. The sub-faction you choose unlocks additional choices for your main faction. Brood are different. They have Broodspawns. There are three Broodspawns to choose from, each led by a different one of the Broodmere’s lieutenants. If you choose to use a Broodspawn your choice of models will be limited in exchange for extra abilities. It’s all good stuff too, and usually the only noticeable thing you miss out on will be one of the other characters. I could summarize what they all do, but you can just click this link for the faction document and check them all out yourself. Also here is a link to the rules since not all the abilities are explained in that faction doc.

~Hope you enjoyed the article. Outcasts will be next!