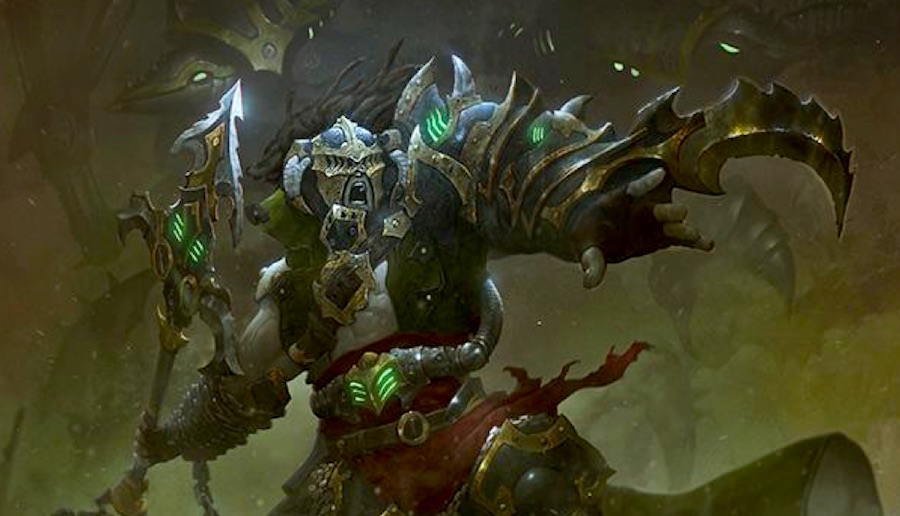 The dreaded pirate has gotten an upgrade for MkIII – take a look at how Privateer brought him to (un)life!

Aiakos, the Scourge of the Meredius, is a Cryxian pirate and warcaster who has honed his skills through years of piracy upon the Meredius. He moves with his battlegroup like a specter of death both at sea and on land, striking down foes with wicked effectiveness. Aiakos has already earned infamy through deeds both brazen and savage. His reputation is a credit to his cunning, ruthlessness, and indomitable will.

One of the toughest sculpts for me in my time at Privateer Press was the original WARMACHINE: Tactics Kickstarter version of Aiakos, Scourge of Meredius, my first Cryx model. Since it was my first experience working with this Faction, I really had to work on the shapes and style, which were a serious challenge. But it was a labor of love, no matter what I said at the time. I knew this Journeyman Warcaster would grow up and take over as a full-fledged badass, and I hoped that someday I would get to work on that full warcaster version.

Flash forward two years: Now I have a little more experience with both the Cryx aesthetic and 3D sculpting, and I’m feeling pretty good about myself… and then Captain Aiakos comes sailing across my desk. Someday had arrived, and I was not prepared.

You can see the Aiakos sketches below that Art Director Mike Vaillancourt would ultimately use to come up with the final version of Captain Aiakos. I [ always find these different sketches interesting since they leave you thinking about the possibilities of what could have been. It must be tough picking from these great options; I know I really like the harpoon! The new concept for Captain Aiakos (above) had everything a sculptor could ask for: it looked great and had been concepted by a great artist, Andrea Uderzo, and yet I still had this mental block. Typically when I work on a sculpt, I go back and forth with Studio Director Ron Kruzie a few times until I get final approval. But with Captain Aiakos, I kept hitting this creative resistance and ended up dragging my feet. After getting feedback on my work from Kruzie, I managed to use a holiday and finish three other sculpts before I finished Aiakos. Once he was finalized and approved, I still wasn’t satisfied. But then the rapid prototype was completed…

That changed everything. Now I wasn’t just staring at shapes on my screen. Instead, there was Captain Aiakos looking back at me, and his details were sharp and his pose was so cool. This guy looked like a freakin’ badass pirate! Now it was only a matter of time before my buddy Dallas Kemp was able to paint him up. That’s what Dallas does—takes my work from the classic silver screen black-and-white visuals to hard-hitting, full-blown modern color. These warcasters and warlocks stop being just images and become part of the real world by the time Dallas is done with them. I love how a model pops after he has painted it. The colors always seem to be just right and always have that extra flair that lets me see the model as flesh and blood on the battlefield. Finally, we come to another amazing illustration by Néstor Ossandòn. So, there you have Captain Aiakos in all his glory! What do you think of Aiakos’ new look?