FFG has new Warhammer 40k, Star Wars and Game of Thrones goodies for you. Take a look.

Here’s the latest goodies to hit the store shelves this week: 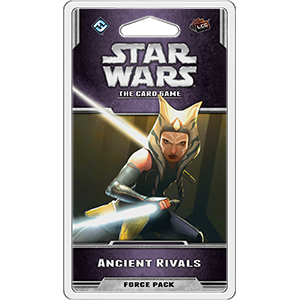 Throughout the Galactic Civil War, certain feuds and rivalries have defined countless conflicts. The Jedi battle the Sith lords, playing out the age-old struggle between the light and dark sides of the Force. The armies and navies of the Rebels and the Empire clash on planets and in the skies above them. The galaxy’s smugglers and spies struggle for supremacy against the scum that lurk in the shadows. These dynamic rivalries have shaped the Galactic Civil War, and now, with the the Opposition cycle, they will take their rightful place in Star Wars™: The Card Game as well.

Ancient Rivals kicks off the Opposition cycle and simultaneously serves as an introduction to the new themes and mechanics that will be found in the cycle. Here, you’ll find a host of cards that focus on the struggles between pairs of affiliations: Jedi and Sith, Rebel Alliance and Imperial Navy, Smugglers and Spies and Scum and Villainy. The Opposition cycle also introduces a host of new fate cards, including a new type of fate cards—fate cards with an affiliation. Ancient Rivals also offers up a host of iconic characters: the heroes and villains of Star Wars: Rebels begin to appear in the LCG®, joined by new versions of classic characters like Dengar, Han Solo, and Darth Vader. Immerse yourself in the epic conflicts and battles of the Galactic Civil War in the Opposition cycle, beginning with Ancient Rivals! 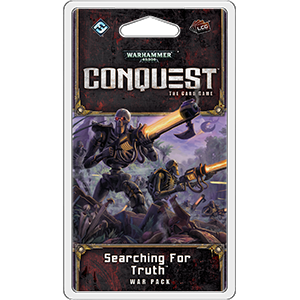 On the surface of Nectavus VI, an ancient being has waited and watched for centuries. As blood rains down from tainted skies and the power of the Warp is unleashed above the jungle canopy, this ancient watcher rises at last. He has observed the secret workings of the galaxy and seen things beyond the eyes of mortals. Now, he will lead the Necrons to restore their dynasties and renew their dominion over the entire galaxy.

Journey once more into the treacherous jungles of Nectavus VI with Searching for Truth, the fourth War Pack in the Death World cycle for Warhammer 40,000: Conquest! Like the rest of thiscycle, this expansion focuses on the new Deep Strike keyword, offering plenty of new cards that you can play facedown, only revealing them when it’s most advantageous to you. Elite units continue to gain power, and a new Necrons warlord invites you to reap the rewards of repairing your warriors and keeping your armies fully operational. Nectavus VI will run red with the blood of warring armies, but only one faction can claim the final victory. 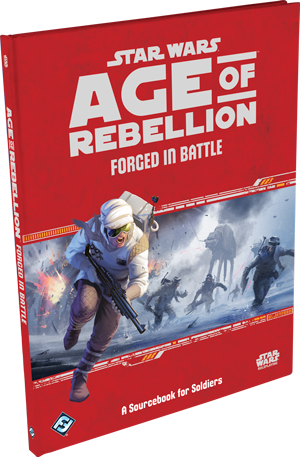 The Alliance to Restore the Republic rests on high-minded ideals, but its battles must still be won in the trenches. The Rebellion’s troops go into every battle outnumbered and outgunned. Its soldiers know that they’re fighting a war against long odds, but they remain undaunted. Instead, they rally together, using their cunning, their skill, and their courage to ensure that the hope for freedom persists in the galaxy.

A Soldier sourcebook for the Star Wars®: Age of Rebellion™ Roleplaying Game, Forged in Battleoffers these brave warriors a wealth of new options and resources with which they can better take the fight to the Empire. Its 96 full-color pages introduce new species, specializations, and signature abilities. A sizable collection of new weapons, armor, gear, and vehicles adds more firepower to your campaign, and Game Masters will find helpful hints on running combats in different terrain, using the changes in environment to better suit the tastes of your Soldiers, as well as all other characters interested in standing on the front lines. 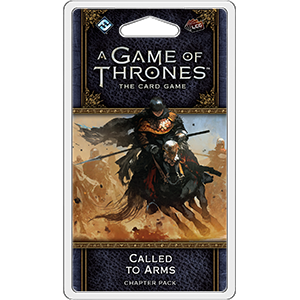 The banners have been called in the War of the Five Kings. In the north, Robb Stark gathers his armies around Riverrun, preparing to strike out at Tywin Lannister’s forces. Joffrey Baratheon has ascended the Iron Throne in King’s Landing, Renly Baratheon has been crowned in Highgarden, and on the islands of Dragonstone and Pyke, Stannis Baratheon and Balon Greyjoy plot their own rise to power. Before long, great armies will march onto the field of battle, while subtle intrigues and assassins’ daggers decide the fates of countless others.

The Called to Arms Chapter Pack is the second Chapter Pack in the War of Five Kings cycle for A Game of Thrones: The Card Game. A new King version of Balon Greyjoy challenges all enemies of the Iron Isles, even as two new attachments give you ways to crown your other characters and make them Kings. You’ll also find iconic characters like Dolorous Edd and Shae entering the game for the first time, even as other cards lend new importance to loyal cards. Finally, this pack continues to introduce a focus on the seasons of Westeros with two new agendas!

These are on shelves NOW.  I’m mosty excited about the “Forged in Battle” book.  A Soldier RPG sourcebook for the Rebels looks pretty cool.