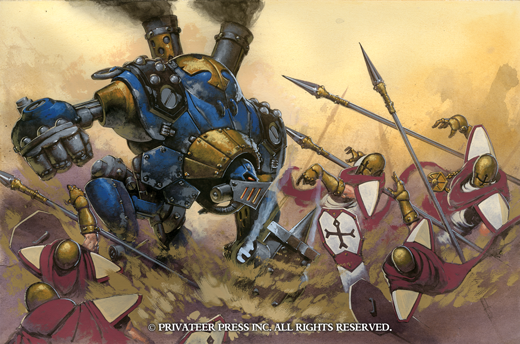 These easy to implement house rules can shake up your games in a big way.

Feat points allow any PC or significant NPC to perform feats of villainy or heroism in Iron Kingdoms – they’re a big part of what makes the roleplaying game tick. Feat points give characters the ability to survive horrific wounds, accomplish Herculean tasks, and have laser focus in battle.

The entire feel of the game can be changed by modifying how feat points work within a campaign. For example, by changing how feat points are accumulated and/or the amount of points a character is able to have at any given time a GM can make a large impact on how the game plays out.

RPG producer Matt Goetz recently shared some of the feat point related house rules they use in games at Privateer. Note: these aren’t official, just ideas to consider when building your campaigns. Grim and Gritty
Each PC begins each session with three feat points, which replenish under certain circumstances (by default, each time the PC incapacitates an enemy, when the PC critically succeeds on a skill or attack roll, and at the Game Master’s discretion). These three points lend the Iron Kingdoms RPG a high-adventure, swashbuckling feel, where the PCs are hyper-capable and able to weather far more than the common man.

To give the game a grimmer, more desperate feel, the Game Master needs only to affect the PCs’ feat points. For starters, having three each time a new session begins? Toss that out the window. However many you end a session with is how many you have at the beginning of your next game. This change alone drastically alters the tone of a game. The players need to weigh more carefully which skill rolls to boost, which damage rolls to Heroic Dodge, and when to reroll skill or attack rolls.

To make it even grimmer (and harder to survive), consider not giving a feat point for destroying an antagonist unless that antagonist is a significant threat to the PCs’ well-being or otherwise significant to them, like a recurring villain or someone to whom a PC has a personal connection. In the same vein, the Game Master can decide that feat points are not gained on critical skill rolls where there is not some element of danger to the outcome. Tying a fancy knot with Rope Use on a sunny dock isn’t worthy of a feat point, but tying one on the deck of a ship in a hurricane to save a comrade who’s fallen overboard is.

This kind of change lends itself well to games about survival and to those with a darker tone, like the tale of a trencher company trapped on the battlefield, running low on supplies, and under constant threat of Khadoran attack. Myths and Legends
Three is a great number—one of my favorite, even—but who’s to say it needs to be the limit? While Iron Kingdoms PCs are already pretty freakin’ heroic and legendary, it’s always possible to make them even more so by giving them additional feat points beyond the three-point limit. One option is to increase the number of points a PC can have at Veteran to 4 and at Epic to 5. Note that this will give the PCs many more opportunities to perform beyond normal limits, so they should be given appropriately scaled threats to confront.

This version may be best suited to stories of legendary heroes of Immoren’s past. A Menite priest-king and his comrades fighting against the darkness of the Wurm’s worshippers in the deep wilderness beyond the walls of Calacia, perhaps, or the leaders of skorne houses fighting in the Shroudwall Mountains while the arcane fury of the Cataclysm still rages around them.

Better Roleplaying through Bribery
This one is less about feat points, though it does require them. In a big action-adventure story, sometimes there are moments that are just too good to pass up. The treasure-obsessed thief is drawn by the allure of a priceless statue sitting on a pedestal that just needs to set off an alarm or ancient booby-trap.

A Game Master who keeps the players hungry for feat points can get a lot of mileage out of compelling such PCs. To do so, the Game Master points out some dramatically appropriate screw-up that would take the story to a new level of complication (e.g., “Are you sure your curious gobber doesn’t want to fiddle with the pile of bones perched on the edge of that precarious fall, which would certainly cause a cacophonous noise in this underground cavern? Everyone else keeps talking and you are getting pretty bored with the conversation. . .”).

This doesn’t mean to take actions for your players. Instead, bribe them. Let them know you’ll give them a shiny new feat point for indulging in such character-appropriate shenanigans and furthering the plot of the adventure. Just make sure when you’re trying to compel an action out of the character that it falls within what the player wants the character to be about. Listen to the PC’s backstory; it’s a bunch of clues about the kinds of things the player wants to do during the game. If a player’s Bounty Hunter got into the profession because her character’s father was abducted by a sept of Thamarite cultists, you would be remiss as a Game Master to not tie that sept back into your game. You’d be even more remiss if the PC didn’t have to choose between hunting down a lead about those cultists and helping perform some other vital task. Good roleplaying game drama is born from complications and how the PCs respond to those complications, not how well they can punch a farrow in the face.

An addendum to the above: sometimes the perfect opportunity for a thrilling scene presents itself, but setting it in motion requires something the most heinous sin in Game Mastering: railroading. Railroading, for those not familiar with the term, is when a Game Master sets the PCs on a track and robs them of the agency to go any other way but forward. (Like a railroad, see?)

Having an NPC see through the PCs’ disguises right when they’re about to make it clear of the Protectorate temple or cephalyx lair might let you have a sweet fight scene take place on top of a churning cephalomek contraption or between burning vats of Menoth’s Fury. But the players might feel robbed by having their careful plans fall apart.

If you must, and I mean absolutely must, railroad your players to pull off a good game, soothe the ache a bit by immediately kicking every player at the table an extra feat point. It’s your way of acknowledging that yes, you are taking away their agency for a moment and you recognize it, but here’s a minor benefit to balance things out a little bit. Then make damn sure the scene that follows kicks all kinds of ass.

Want more? Check out Privateer’s RPG forums to get ideas from other GMs and players – and to share your own house rules with the community.

What do you think about Matt’s feat point rules?