Konflikt ’47: Designing the US Grizzly Walker 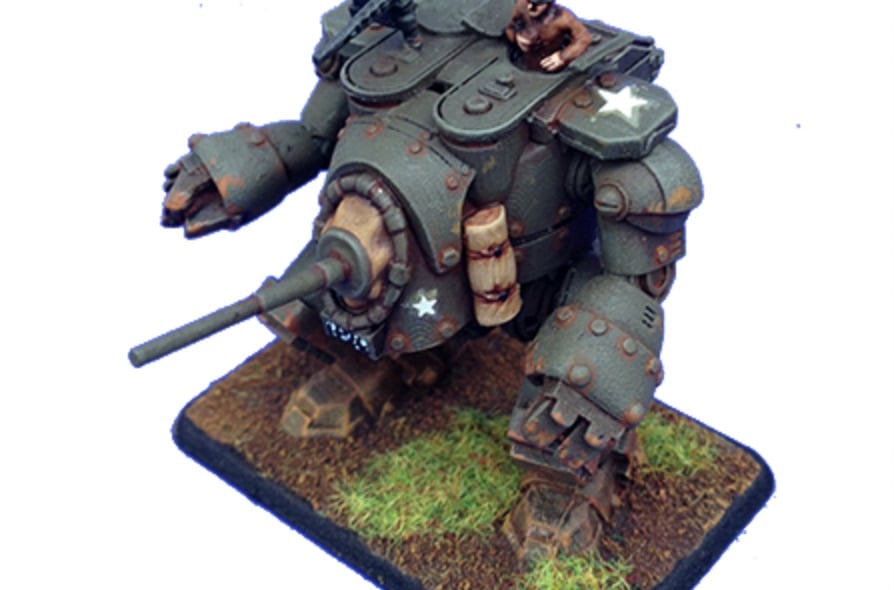 Konflikt ’47 is here – and there’s a lot more to come. Chris Hale of Warlord gives us a look at designing one of the walkers due out this fall: The rugged US Grizzly…

When designing a non-historical setting, the initial options are limitless! However, ‘anything goes’ does not make for a strongly defined setting or aesthetic. One of the great pieces of advice we were given by Rick Priestley was that defining the limits and absences of a setting or faction is a crucial part of establishing a characterful and coherent world.
With this in mind, we created some early principles from which the game setting, model designs and rules would flow. As you’ll see, each one follows logically from the others…

These core principles informed everything. Before any of the fictional history of the game was penned, or a single model was designed, we knew what the boundaries of the setting were and therefore, what did or did not ‘feel’ like Konflikt ’47. The US Grizzly walker was one of the first walker designs we worked on. In fact, it pre-dates our 28mm scale models, beginning life as a 15mm scale curio! Despite this, it shows how we applied our game world principles.

One of the first things we considered was for walkers as a whole. How powerful are they? Why build them? Obviously, we wanted them in the game because they look cool, but how would they be used? We realised that walkers should be similar to traditional tanks, but feel distinct and fulfill a role lacking at the time.

We decided that the place they fit was in taking armour support into the places traditional tanks were disadvantaged: broken, tight terrain typified by the streets of France and the ruined roads of Stalingrad. Urban fighting and close quarters engagements would be where the military minds of 1947 saw their walkers being employed, so the models and rules would reflect this.

Moving to the Grizzly specifically, I drew several rough sketches before landing on the design you see here. Essentially, I was looking for shapes and features lifted from the Sherman design. Nabbing hatches, vents etc makes sense in that engineers would logically re-use parts for efficiency and cost, but it also gives a ‘design vocabulary’ that ties a design to its home nation. I also noted a few small engineering features to sell the ‘logic’ of the design. It always bothered me that some games put large, recoil heavy weapons on the shoulders of spindly legged mechs, so I designed the Grizzly to have knee pads that double as stabilising ground plates and an overlock bar on the ankle, so that it could brace itself to fire the 75mm gun. I also added a skirt of ablative armour around the fragile hip joints and gave it the ubiquitous M50 pintle gun. I included headlights for operating in poor lighting and shoulder plates that could have aerial identification markings to avoid friendly fire. The digital version of the Grizzly has a few concessions to the realities of production; the armour skirt became a single plate to reduce parts, and the model got smaller overall. However, some other elements such as the leather gun cover arrived to tie the model more closely to its historical setting. The rules for the Grizzly reflect our design choices as well. As a walker, it can traverse terrain types a tank cannot. Although it is more lightly armoured than a tank in the same size class, its armour is evenly distributed on all sides, so it lacks any weak spots. Its 360 degree hip joint allows it to fire its gun in any direction as a turret, whilst the two articulated fists enable it to engage in close assaults against vehicles, infantry and even other walkers. Just as importantly, the Grizzly fulfills its role as a workhorse chassis, with two other variant designs listed in the core book. There are yet further variants in the works, so it looks like you will be seeing more of this walker in the future! You don’t have to wait for this bad boy to come out this fall to play – Konflikt ’47 is available now: