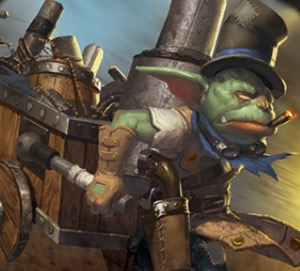 A consideration of where the humble Gobber Tinker can fit into various lists in Mark III.

Chalkboard here from Chalkboard War, with a first “Workshop” article for Warmachine and Hordes Mark III. In my Workshop series, I think through the strengths and weaknesses of a model, then puzzle out where they might best fit into various lists. This week I’m focusing on the simple little Gobber Tinker model. We’ll review the Tinker and why he’s improved in Mark III, then think about a few spots where he works in various Warmachine and Hordes armies.

Why this model, and why him first? Well, because of points cost mostly. With the increase in points values in Mark III, it places all the more value on the small gap-filler models in forces. At only two points, there will often be room to at least consider including the Tinker in the various lists where he fits. Also, because he works for a number of factions (all except Cryx, Protectorate, Retribution, and Convergence), there are lots of players that might consider a spot for the little guy.

His main rules that make him effective are his Repair ability, which removes d6 damage from friendly Faction Construct models and his Mechanikally Adept rule that lets him target friendly non-Faction models with Repair as well. A cheap model that can take an average of 3.5 damage off of models per turn isn’t bad at all.

The other thing that he has that’s worth noting is his defensive ability that was gained in Mark III: Wagon. This special rule means he always has Cover. That makes his Defense a pretty impressive 18 against non-spray ranged attacks and magic attacks, no matter where he’s standing on the field. He’s vulnerable to blasts, so don’t think him immune to everything, but relating that defensive number to your opponent and keeping the Tinker in the backfield is usually going to protect him for a while.

Finally, he’s got two other minor advantages. He does have a halfway okay attack, a range 8, POW 10 pistol and the Gunfighter special rule. And he’s a Medium base, which means that in a pinch he’s good at helping block line of sight to warcasters and warlocks, and can be placed to prevent Tramples–another great line of defense just in case for a Warcaster/Warlock.

I think this suite of abilities, coming at a pretty bargain price tag in the game, means he’s worth a look for a lot of Factions and forces. He’s not game-breaking, but he offers a lot of utility if included with the right armies–which we’ll explore below. 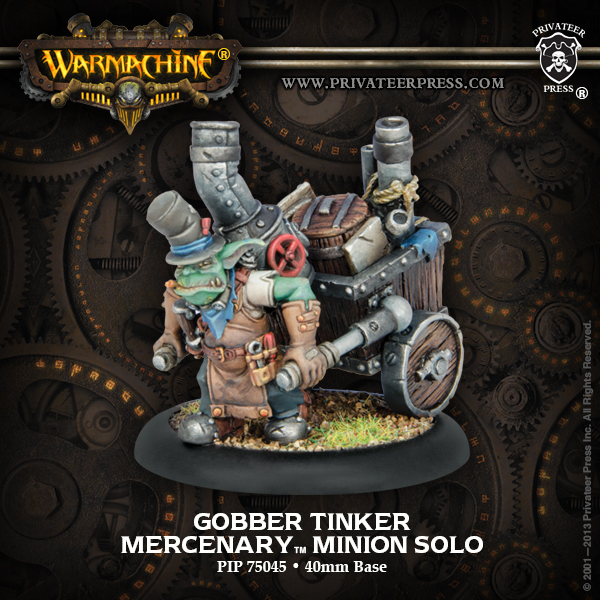 Finally, he’s just a great model. As with all of their Gobber models, he’s got great character and persona. I know that many people are hoping for other armies to be the new Hordes faction–but man, I’m holding out for Gobbers as I think Privateer Press would do a great job with them.

Spots for the Tinker in Warmachine and Hordes Lists

The Gobber Tinker works for Cygnar, Khador, Trollbloods, Circle Orboros, Legion of Everblight, and Skorne, and of course can be put in Mercenaries and Minions lists as well. I like him into three specific spots  in Warmachine and Hordes armies where I think he can do the most good:

Khador. Battle Mechaniks are not much more for a minimum unit, but the Tinker removes d6 rather than d3 damage, and isn’t stuck with coherency issues. Plus the fact that he’s Def 18 against shooting and ranged is a big advantage. I actually like him alongside the unit of Mechaniks in any list that’s going somewhat Warjack heavy. That way, the Mechaniks can stay clustered around the central line of Warjacks, but you can have a single Warjack running up a flank at maximum control range, followed by the Tinker to keep critical systems repaired. With Khador’s high armor, repair is all the more nasty. It makes single attacks seem meaningless to the opponent, which can be more demoralizing psychologically than anything else.

Skorne. I like him working with Zaal2 lists, particularly those that are including Hakaar and a number of Ancestral Guardians. I’m not sure I like him simply with Ancestrals/Hakaar in other lists, as they may simply get destroyed rather than being left with damage to be repaired. ARM 18 and ten hitboxes is fairly solid, but not impervious. With Zaal2 it gets all the better–sure, his feat turn repairs Constructs, but the Tinker gives you that ability in other turns, and can help clean up damage done to any model that happens to take a splash of damage despite the +5 ARM of the Feat. Finally, he can repair Zaal2 himself, which makes Zaal a fairly nasty tanky threat. Give him Spiny Growth from a Razor Worm and a few transfers and a shield guard nearby, and he can definitely use his Righteous Vengeance to get up into his opponents’ faces, confident that the little Gobber Tinker can clean up some damage to him as needed.

Circle Orboros. I think he’s a good fit in lists that want to go heavy on their Constructs but are not using Baldur or Bradigus. The Baldurs’ Elemental Mastery rule lets them heal construct warbeasts, and Bradigus can at least repair them, but many other Circle casters are left without a means to actually heal their Construct warbeasts (traditional sources like shifting stones don’t work). So for any list that wants to take Megalith or any of the Wold models, including a Gobber Tinker seems almost critical. There’s always that moment when playing Hordes where you need to clear the damage from a critical spiral before sending in a beast, and the Tinker can be the cheap source for that around Construct Warbeasts.

~ What are your thoughts on where the Gobber Tinker fits? Any reason to take him in other lists? Is there a spot he fills in Legion or Trollbloods that’s really unique and I’m not seeing? Let us know in the comments section below.

If you’re interested in what the author’s fielding lately, check out Chalkboard’s blog at: