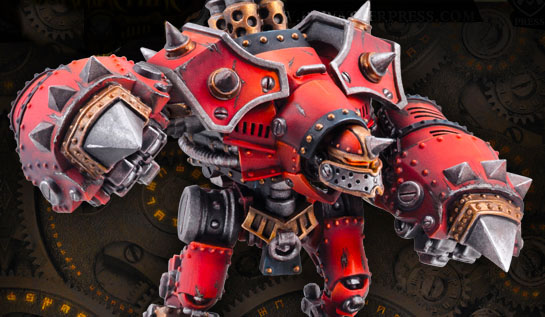 The new Berserker kit is out and it brings along a new jack for Khador. Come check out our review of the new Mad Dog(s)!

This is a brand new cheap pointed jack for Khador with a specialty in trampling the competition. It is only 7 points and has a Field allowance of unlimited. While I don’t mind the Rager FA:u is subject to groans from me as I have a distaste for some of the spam list this jack can make. 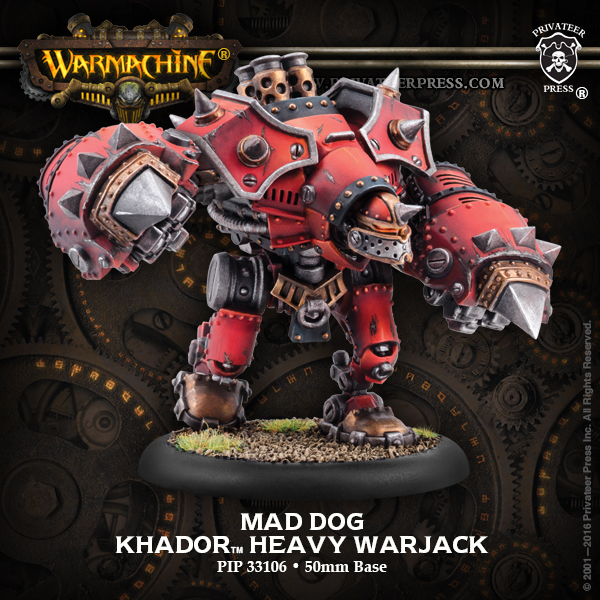 The Rager is a Berserker variant so it has the similar DEF11 ARM18 SPD4 statline you may be used to. However it does have some interesting rules to go along with it. It has the Jury Rigged special rule similar to the Freebooter of the mercenary faction. So it can take damage for exchange in a speed buff of 2″. It also can trample for free with an additional dice to hit during tramples thanks to the Smasher special rule.
Like all Berserker chassis it is an unstable jack representing it’s poor cortex construction and may blow up if using heavy amounts of focus. The Rager is not heavy per se in the melee department clocking in with 2 POW14 Spike attacks. 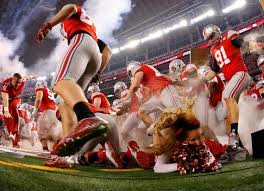 You may have already seen some Karchev and Butcher lists spamming these jacks. They are relatively cheap and Butcher can make up for the lack of hitting power with Fury and his feat. Karchev gives them some impressive threat ranges and overall jack buffs that makes a lot of them an issue to deal with. On the bright side their defense is relatively low and the armor is less than the standard Khador heavy and my personal favorite the Juggernaut.

In Butcher tradition and having played against a similar list a few weeks ago let us spam with Butcher!!! This list boggles up the front line with 6 Mad Dogs who are quite capable of clearing models out with Butcher’s full throttle cast on them. Even heavies have to be wary if the Butcher feats making all of the Mad Dogs pseudo weapon masters. Combine that with the core stable of Behemoth, Joe, and Rifles+Rockets you have a pretty nasty list able to take on multiple threats. Pathfinder is lacking in this list so probably not a great Wurmwood or Circle drop. But that is what Irusk2 is for! 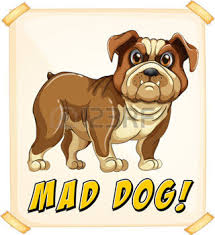 Mad dog is an interesting addition to the Khador jack stable. I do like now having a cheaper option to field since Behemoth usually leaves you with only a few spare free jack points. It doesn’t do anything atrocious as some of the other cheap lights that are roaming around and I think it is a pretty well balanced addition to Khador. I think you will either see 0, 1 or 6-10 of them.

What do you think of the new khador Mad dog BoLS? Please share in the comments below.