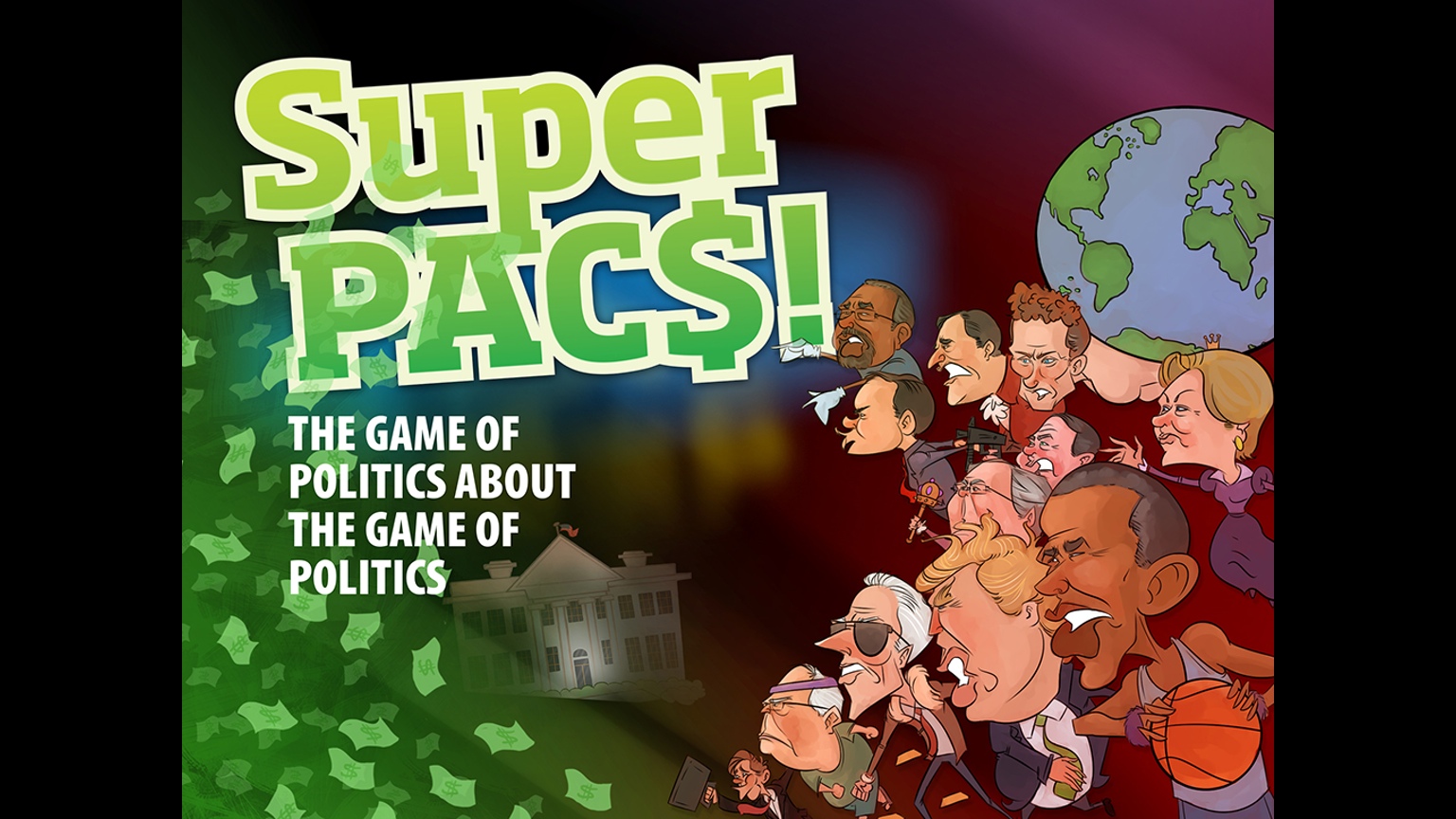 The Tabletop Spotlight is on Super PAC$! – Will you be able to win the game of politics?

Super PAC$ is satirical take on the political system. In the game players take control of one of the unique leaders and your goal is to eventually end the game with the most power and influence. Players must recruit different factions who they can then use to exploit for influence, money or both. They can also do things to mess with the other players as not all leaders have the same ability.

The artwork is clearly satirical – it’s basically caricatures you might see in the Sunday Paper dialed-up to 11. Just take a look: 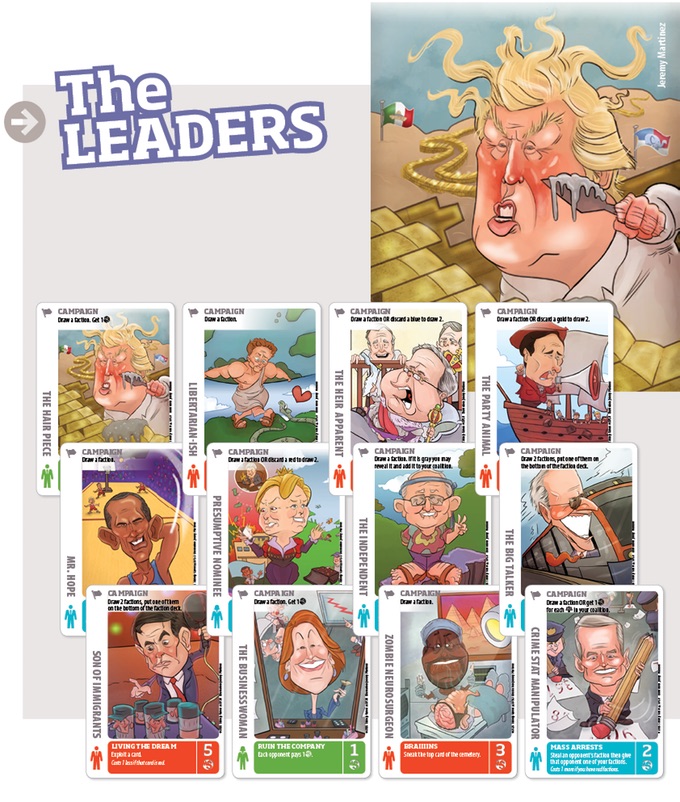 While no actual political person, voting block or interest group is named, with a quick scan of the headlines it’s pretty easy to see who’s-who. Now, before anyone gets offended or thinks this game is slanted towards one party or the other, I’d like to point out that this game really takes the “South Park” approach: they slam every side pretty much equally.

Politics aside, I was actually surprised at how strategic the gameplay really is – you can’t just coast to an easy win with this game. You’ve actually got to maneuver your leader through the available factions and play smart. Getting a strong coalition is just as important as gaining investments which are both as important as messing with your opponents. There are many ways to go about winning because everything translates to “power” in the end – who ever ends up on top wins. 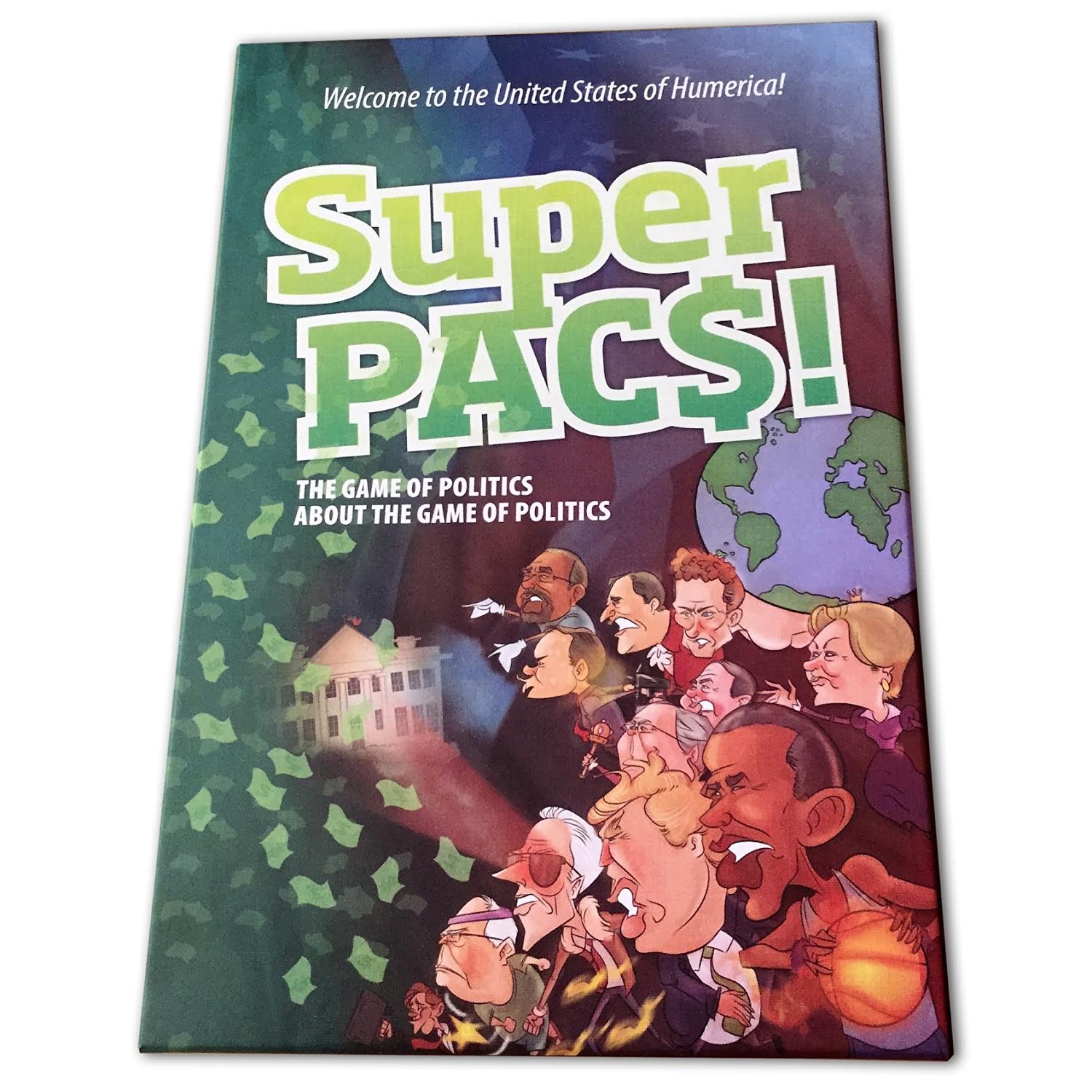 Super PACS! The Game of Politics About the Game of Politics is a card game for people who roll their eyes at the absurdity of political campaigns, despite the horror and hypocrisy, and defiantly choose to laugh instead of… move to the moon. In this highly strategic card game, each player begins with an obnoxious leader that has a unique way of bending the rules. Players have ten turns to accumulate the most power. Along the way, there are elections and random events to shake up the established order.

The cards you play from your hand represent well-known factions, such as “Gun Nuts” or “Single Moms.” Each faction contributes votes, wealth, and power to your coalition. You can also “exploit” them to gain special favors and attack your opponent, or you can “sneak” them into play when the time is right. The wealth of your factions determines how well you can fundraise and the investments you can afford. Would you like a Casino, or a Swiss Bank Account? This is yet another way to amass power and win.

As you initiate your schemes and machinations, 98 different political cartoons provide biting commentary along the way. Super PACS! was designed by André Pereira and Brandon Patton in a collaboration between Tabletip Games and Merlin Pool Games, as part of the Politikards series by Tabletip Games.

Play nice in the comments…this game is a SATIRE.