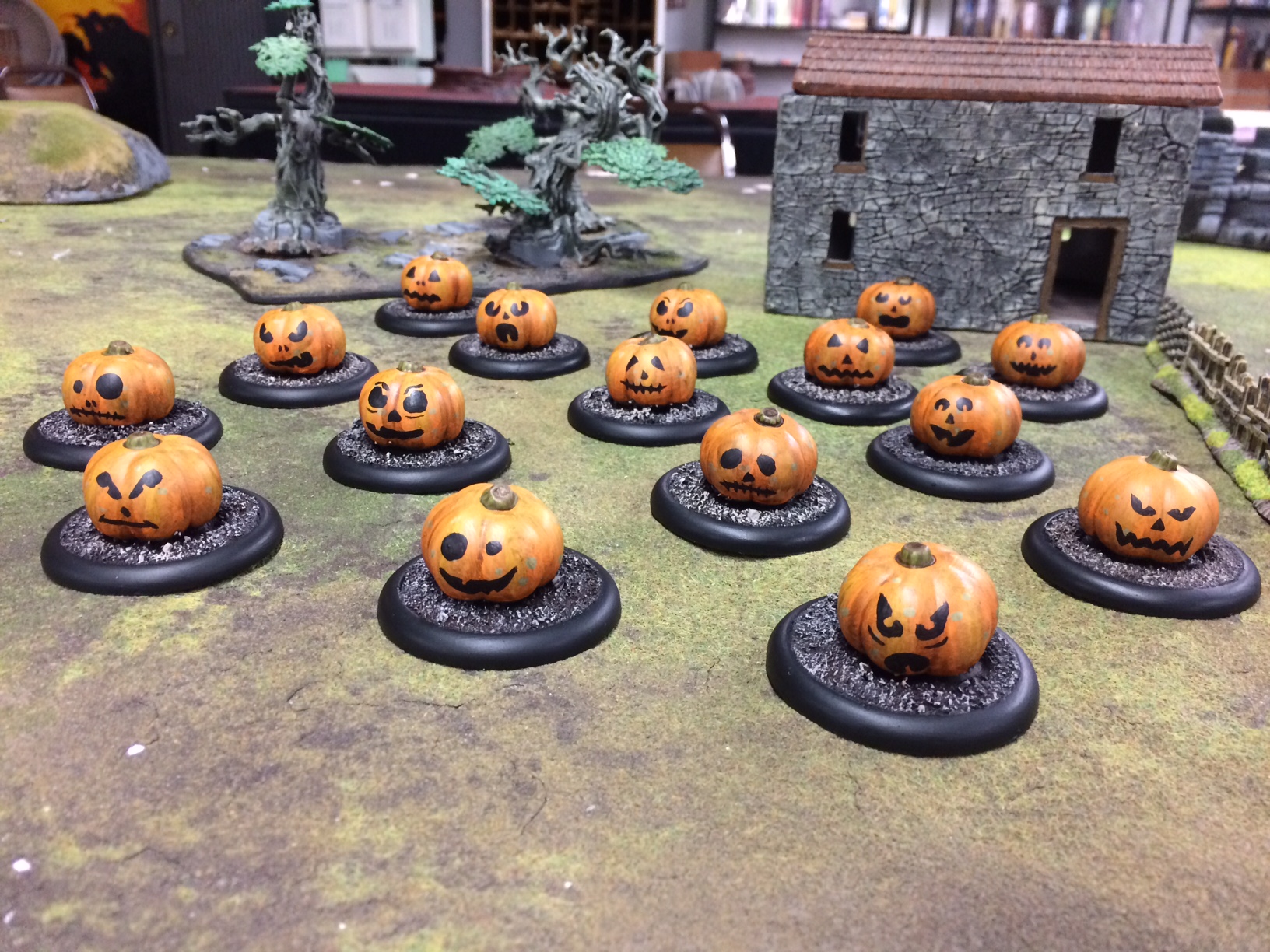 Thoughts on variant rules Warmachine and Hordes tournaments for the Halloween season.

Chalkboard here from Chalkboard War, wishing you a very happy Halloween season. Given the holiday is fast approaching, I thought I would share a bit about a recent variant rules event that we ran in my meta with a Halloween theme: a Scream-Roller. I’ll describe the event rules and thought process, and then talk some about variant rules events in general as a way of getting feedback: what do players think of variant events? What rules changes do people not mind, and what is too far?

I decided to run a variant event for Halloween for a local gaming store, as I wanted a chance to do something a bit off the beaten-path for them. For this first-annual (hopefully we’ll do it again) Scream-Roller, I thought a lot about how to make it fun and varied while still straightforward, for a particular reason: our meta had a number of players attending who were preparing for an upcoming nearby state championship event in two weeks, so I didn’t want to have too much divergence in this event to meddle with their use of this as a practice event. That said, I also wanted to do something different for everyone. Thus, the Scream-Roller. It used all the rules of a regular two-list Steamroller 2016 event, with a slight Halloween tweak. Instead of the other Steamroller 2016 objectives, I made up special Jack-o’-Lantern objective markers (you can see a big group of them that I painted up above, which we gave to each player afterward as a bonus prize of sorts), and developed a set of rules for them for the games. Every list had to use the objective rules below for their force, which had either a trick (three bad things for foes) or a treat (three good things for one’s own army) element to them, rolled randomly at the start of each game. 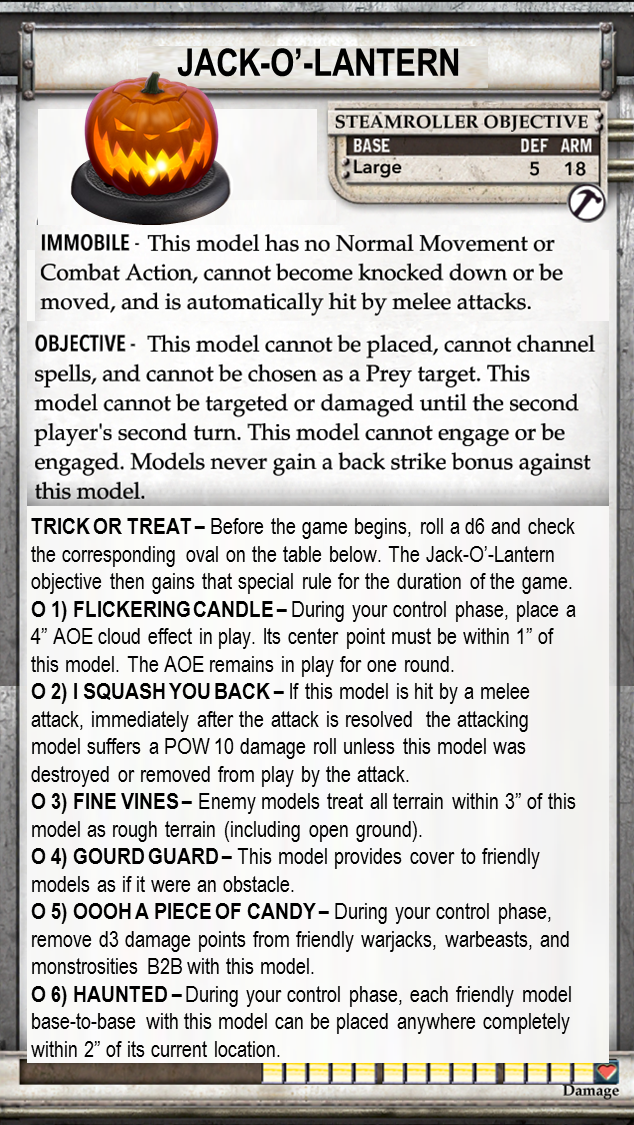 I made certain that all three missions were three that featured Objectives most prominently–as I wanted the rules to be used for the event. Thus Entrenched, Extraction, and Recon were the pairings for the day. The other rule to increase the Halloween “scares” that we used was the Divide and Conquer 1 rule: both lists had to be played at least once during the event. Nothing is more horrifying than getting list-locked in a tournament. While I contemplated more variant rules or home-brew scenarios, I felt like this was the right mix to make it different while still being the same. Which leads me to the main consideration of this article: what level of variation are people comfortable with when it comes to variant rules events?

Warmachine and Hordes games are carefully balanced things, and event organizers meddling with rules could lead to some problematic outcomes when it comes to game balance. At best, if variants are random–then things which favor one over another are balanced by randomization. But that can engender a poor feeling at times. That said, some of the most entertaining formats of the game have originated from “for fun” variant rules experiments: things like Who’s the Boss, which has players randomize which warcaster or warlock they have to use with their list, or Thunderdome, which has players take three warcasters or warlocks only and run them in a single arena battle of death. Even Privateer Press has gotten into exploring variant rules, as their variant “Rumble” rules certainly lend themselves to a somewhat different play style.

When planning the Scream-Roller I had all sorts of ideas about Halloween themed missions and events that could be used: making the zones charnel pits, having haunted effects from various terrain pieces, a mission including putting a vengeful spirit to rest, spider-web themed terrain elements, and more. Yet I worried that too much variation would lead to confusion and lack of enjoyment for the event. A competitive event is different than a story-driven campaign. If you’re asking people to compete, and you’re offering prize support and trophies, the feeling of “fair” needed to be essential. I ultimately shelved a lot of of those more wild ideas–though I’ll be using some in the narrative campaign that we’re running at another store I where I help organize events. So that left the conundrum I wanted to ask the Warmachine and Hordes community about: how much variation is too much? 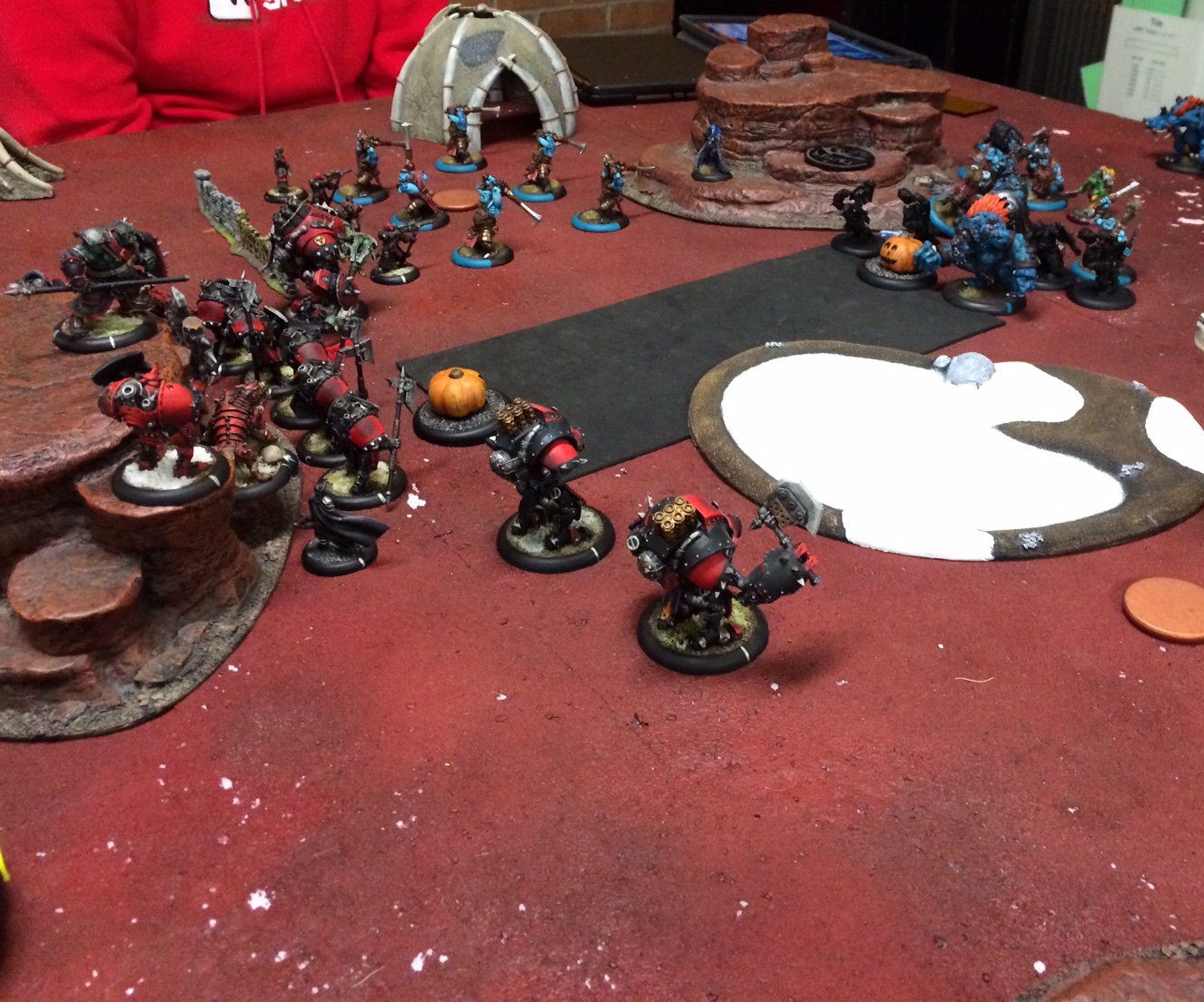 The mighty Khador advance squares off against the Trollbloods as both sides ask “why the hell are we fighting over pumpkins?”

How many adjustments would you be willing to see in a game? What is that right mix of just enough different elements to make it an interesting one-off event without leading to confusion or lack of enjoyment? I’m inclined to run a Scream-Roller tournament next year in the Halloween season, so it’s not only theoretical. I definitely erred on the side of caution and minimal changes, and tried to make up for it with the objective markers, prizes, and copious amounts of bagged Halloween candy that was distributed among the players over the course of the day. But I’m inclined to get some thoughts and feedback about what is too much variant or house-rules in a competitive event? I’ve attended events where the decision of the organizer to change the way that tie-breaker order was conducted caused some consternation. Too much variation, or too little, and the event isn’t as effective as it could be. The goal is fun, and if people are turned off by too much variation from the standard ruleset, that becomes a fine line for an event organizer to walk.

~ What are your thoughts? How many variants are too many in an event? What are you okay with changing, and what would you want to see remain the same if you were considering attending a variant rules event? Have you done your own Scream-Roller tournaments in your meta? What rules changes (if any) did you use?

If you want to see something truly scary, look at all the losses Chalkboard has racked up on his Warmachine and Hordes blog: