BoLS is wrapping up our Wrath of Magnus coverage today. We look at some Relics, Warlord Traits and Magnus’ 18″ D!

The fat lady is singing.  After a decade in the dark the Thousand Sons are back with an amazing book.  They are an army that will utterly dominate the psychic phase and will bring a unique set of abilities to thier players and challenger to their foes.

We’ve had a great time bringing you a peek at this weekend’s upcoming book, but we couldn’t let you go without a teensy peek at the psychic powers, relics and warlord traits from the campaign book. Remember that these glimpses are only from the Thousand Sons and you’ll need to pick up the book to seen all the rest AND the entire Tzeentch Chaos Daemon section – which may have an equal if not greater impact on the meta as the Thousand Sons list.

Let’s be honest Warlord Traits are the cherry on top of a 40K sundae, and usually a flat affair.  While there are some dull ones on this chart, you do get some real pizazz with items such as Lord of Flux which Magnus comes with automatically.  Arrogance of Aeons, and Lord of Forbidden Lore reinforce both the fluff and the army’s already potent psychic ability.  Overall rating: not too shabby! 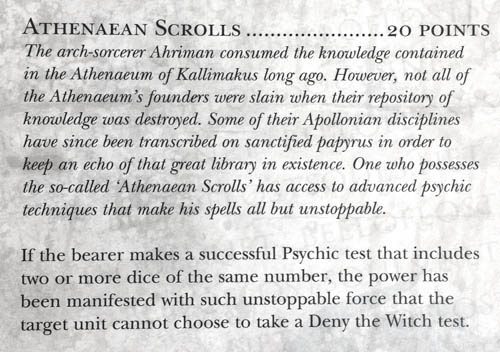 We aren’t going to show you all the relics, but they have a very wide range of effects and are well costed.  There is everything from daemonic weapons, to items to enhance movement, to our personal favorite – the Athenaean Scrolls.  For 20 points, we think this may be the auto-include for your bad-ass sorcerer. If you have a giant pool of warp charge each turn and are throwing some serious dice around at a time, why not add that extra chance to cancel Deny the Witch rolls from your opponent.  It’s one incredibly useful Relic that builds upon the core competency of the entire Thousand Sons army – utterly overwhelming their opponent in the Psychic Phase.

You’ve heard about it, didn’t believe it, and are a bit anxious about staring it in the face, but Magnus’ big 18″ D is real and it takes FIVE Warp Charge.  That would seem like an uphill climb, but luckily Magnus is Mastery Level 5 and harnesses warp charge on a 2+. Did I mention he draws line of sight to every unit on the table for psychic powers and is IMMUNE to perils of the warp.  It goes without saying that an 18″ D beam is going to cause some SERIOUS carnage out there on the tabletop!  Take him in the Grand Cabal detachment and he can cast 6 powers a turn, and knows 15 powers to choose from.

~That’s it folks, have a great time counting down the days and pick up Wrath of Magnus this Saturday!