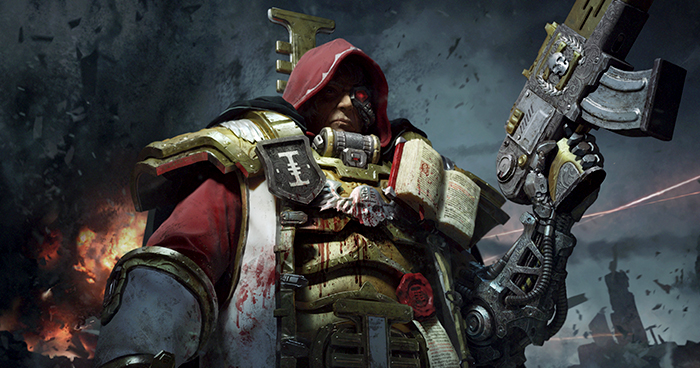 We’ve got a copy of Codex Imperial Agents and we’re taking a tour – check it out!

Codex Imperial Agents is a weird one. It’s a very different book in terms of structure and content because, while it does have a Sisters of Battle Army list, it has multiple “factions” and each one has their one mini-detachment:

Let’s start with the obvious stuff:

We’ve already hinted at some of the stuff the Sisters are getting so I’m not going to rehash that. I will say that unfortunately there are no new sisters models in the book. But the army list does include a couple of units from the Inquisitorial side of things.

One of the factions I thought was interesting that we mention but don’t show is the Legion of the Damned. Their Detachment is entirely Elites and it allows you to run a bunch of squads from the Legion of the Damned in your army. Another strange detachment was the Aeronautiaca Imperialis one. Their section allows you to add a ton of air support from the Imperial Navy in the form of Valkyries. That’s perfect if you are looking for a way to lock down your tabletop airspace.

The majority of the book is basically that – a consolidated list of Imperial factions an each one has their own unique Detachment with rules and units from that faction you can take. You really need the detachments because most of these factions don’t have a way to take them as a “traditional” ally in your army. The Legion of the Damned example above wouldn’t fit in an army via other means.

Another thing I really liked was the way Games Workshop actually made the Inquisitors related to their Ordos. Now you can really customize your Inquisitor based on what Ordos they are from and that has an impact on the gear they can take as well as which extra units they have access too. It was a really nice touch.

Overall, if you’re looking for a way add in some allied support from the Imperium in the form of Inquisitors, Grey Knights, Deathwatch, Sisters, or a number of other Imperial Agencies then this book is for you. I’m also very curious to see what the competitive crowd does with this book. I think there are lots of things folks will take advantage of in terms of army support and I really want to see what happens to the meta. Imperial Agents hits shelves on the 17th – are you ready?

While the Imperium draws great advantage from the unbelievable weight of manpower it can bring to bear, the diversity of its military is its greatest strength. Many, many esoteric factions are expected to answer the call to protect humanity, from the arcane Adeptus Mechanicus, to the merciless, psychically-gifted Grey Knights and all in between. The forces of the Imperium are myriad and distinct, but all follow the Emperor’s divine will – through this common goal, they strive to ensure the continued if fraught survival of Mankind.

Oh the Inquisition. We were expecting you…