Grim-Dark your Desktop or Smart Phone with some new backgrounds from Black Library!

Black Library has some new Wallpaper Packs featuring the great cover artwork from their different series. If you’re looking for a way add some Warhammer to your daily screen-time then check these out: 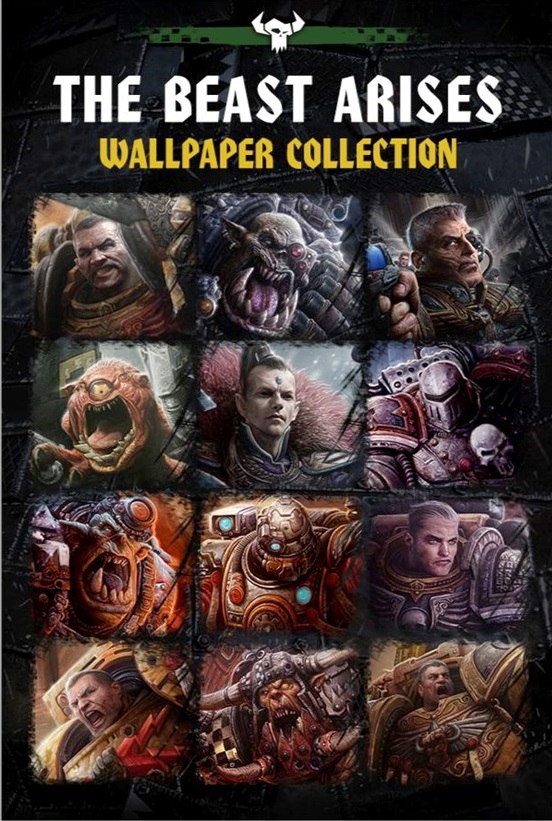 Bring the Imperium’s greatest war since the Horus Heresy to your tablet, phone and computer with all 12 covers from the epic Black Library event series as digital wallpapers.

THE COVERS (All art by Victor Manuel Leza Moreno)
I Am Slaughter: A hardened veteran of the Imperial Fists stands, sword raised with a monstrous ork reflected in the blade.

Predator, Prey: One of the greenskin invaders ravaging the Imperium charges forward, weapons in hand.

The Emperor Expects: A scarred and grizzled officer of the Imperial Navy prepares to enter battle.

The Last Wall: A monstrous ork warlord and his pet squig prepare to bring death and destruction to mankind’s Imperium.

Throneworld: An ancient eldar stands proudly… but what is his role in mankind’s war with the bestial orks?

Echoes of the Long War: Bolter blazing and dark iron armour resplendent with the sigils of the Dark Gods, an Iron Warrior looms…

The Hunt for Vulkan: An ork mekboy, complete with high-tech (well, for orks) goggle and all sorts of gubbinz on his back, not to mention a rather nasty looking axe…

The Beast Must Die: Clad in robes of Martian red over his cyborg body, a skitarius ushers his fellow warriors onwards, to victory or death.

Watchers in Death: An iconic image of a Deathwatch battle-brother, emblazoned with the golden shoulder pad of an Imperial Fist.

The Last Son of Dorn: A golden-clad Imperial Fists Terminator brings death to all who would threaten mankind’s future.

Shadow of Ullanor: A mighty ork, perhaps the Beast himself reaches for the sky with a lightning-clad power claw.

The Beheading: With the Imperial Fists resurgent, their new Chapter Master shows his full glory for the first time. 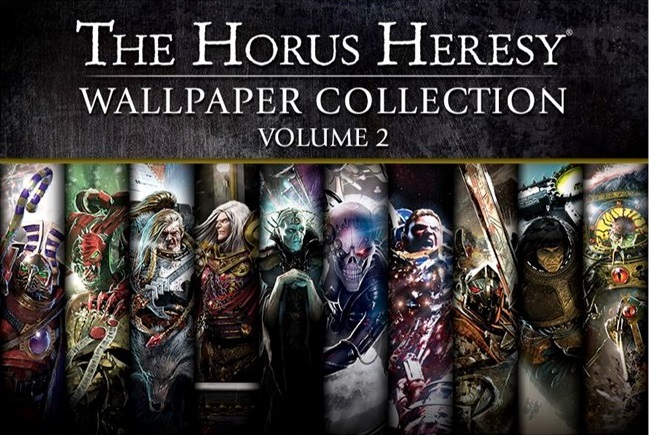 Adorn your phone, tablet or computer with scenes from the Imperium’s bloody civil war with this collection of ten Horus Heresy novel cover wallpapers taken from books 11-20 of the bestselling series.

THE COVERS (All art by Neil Roberts)
Fallen Angels: The Angels of Caliban assemble for war! An entire army of Dark Angels is displayed, with war in the background. But are they loyalists or traitors…?

A Thousand Sons: The warrior-sorcerers of the Thousand Sons march to battle, commanded by the imposing presence of their primarch, Magnus the Red. A classic piece of art by Neil Roberts.

Nemesis: The war for mankind’s future descends into the shadows, as a sinister Culexus Assassin, on the hunt for the deadliest of prey, travels through dangerous tunnels.

The First Heretic: The Emperor’s Custodian Guard are attacked by the most monstrous of foes: Space Marines possessed by daemons! The Gal Vorbak, the most blessed/cursed (delete according to your tastes) of the Word Bearers turn on their allies in a shocking act of betrayal, and a fantastic piece of art.

Prospero Burns: War comes to the pyramids of Tizca, in the form of Leman Russ and his savage Space Wolves. This iconic portrayal of the primarch – complete with his snarling Fenrisian wolf companions, Freki and Geri – is available in a deluxe format for the first time.

Age of Darkness: Horus, the Warmaster, is displayed here in all his dark glory. Powered by Chaos and swearing an end to his father’s Imperium, this is Horus the conquerer, Horus the would-be Emperor, Horus the Traitor.

The Outcast Dead: In the depths of Terra’s hive cities, a cowering astropath is guarded – or is he held prisoner? – by a group of Space Marines in a motley collection of scavenged armour. A unique and atmospheric Horus Heresy cover.

Deliverance Lost: The Lord of Ravens bursts into battle on his winged harness in this epic piece of art. Flanked by his legionaries and with a dizzying perspective on the landscape around him, this is a stunning piece for display.

Know No Fear: One of the Horus Heresy’s most iconic images sees Ultramarines primarch Roboute Guilliman standing on the hull of a starship, punching off a traitor Word Bearer’s head. It really doesn’t get any better.

The Primarchs: Nine of the Imperium’s greatest heroes, sons of the Emperor Himself, stand in easy conversation on a gallery at Ullanor. Little do they know that within a decade they’ll be locked in deadly war… A true classic from Neil Roberts 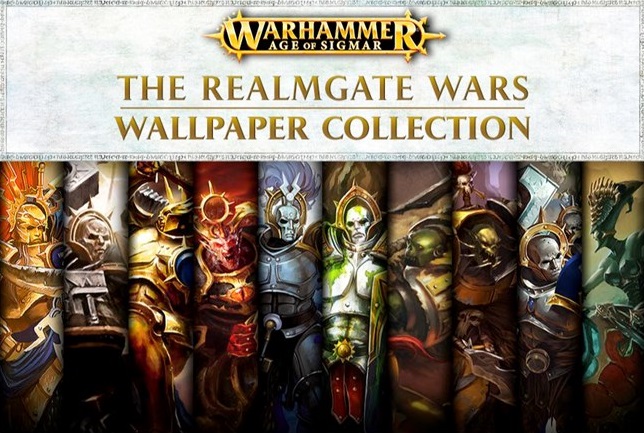 Celebrate the war to reclaim the Mortal Realms with digital wallpapers of the cover art from Black Library’s Realmgate Wars series of novels, in a range of formats suitable for phones, tablets and computers.

THE COVERS
War Storm (Diana Martinez): An iconic image of the initial clashes in the Mortal Realms as the gold-clad heroes of the Hammers of Sigmar take on Korghos Khul’s crimson-clad Goretide.

Ghal Maraz (Mac Smith): The twisted daemonic servants of the Plague God ambush the silver Stormcasts of the Hallowed Knights in the Realm of Life in this action-packed artwork.

Hammers of Sigmar (Paul Dainton): A titanic clash takes centre stage on this cover, as a Retributor of the Hammers Sigmar takes his, well, hammer, to a monstrous Bloodthirster!

Call of Archaon (Antonio Luis): Archaon’s warhost stretches across a vast plain in this iconic artwork, with his Varanguard at the fore, riding fast and ready to deal death in the Everchosen’s name.

Wardens of the Everqueen (Oleg Leshiy Shekhovtsov): The shining warriors of the Hallowed Knights assemble, ready to meet their foes, in a classic image if a Stormhost preparing for war.

Warbeast (Alexandre Chaudret): Another image of the Hallowed Knights adorns this art, with them facing the verminous skaven in a sinister, green-tinged atmosphere of decay.

Fury of Gork (Pedro Nunez): Waaagh! A warhost of Orruk Ironjawz Gore-Gruntaz charge down some very unlucky Stormcast Eternals in this kinetic and brutal piece.

Bladestorm (Akim Kaliberda): It’s more Ironjawz here, as a massive horde of Gore-Gruntaz charges across the plain. Did we say massive? See how the Orruks stretch out into infinity…

Lord of Undeath (Mac Smith): It’s a duel that could only take place in the Age of Sigmar – a Knight-Azyros’s warding lantern blazes Sigmar’s light onto the Mortarch Neferata.

All of these fantastic covers come in multiple sizes when you purchase them so you’ll be able to use the right size for a ton of different devices. Plus its a good way to legally get those wallpapers in digital form.