Part boardgame – part digital app: the hybrid tabletop games are here and we took them for a spin.

Board games and the “Digital World” haven’t always gotten along. Looking back there is a string of games that have tried to merge the two and they haven’t really gone over smoothly. Maybe it’s the scope or scale of the game. Maybe it was that the “merging” didn’t fit – perhaps one part of the game overshadowed the other. Maybe the execution just made the digital part tacked-on to the board game part (or vice-versa).

However, there is hope for the merger of the digital and analog gaming world and I think Fantasy Flight Games is doing it right. 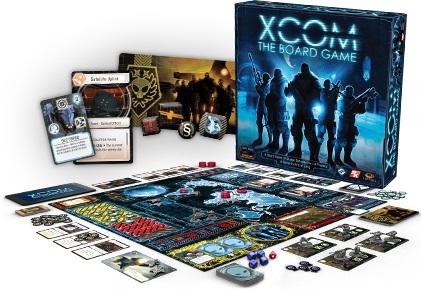 I recently got a play XCOM with a few of my friends who actually knew how to play the game. They probably had 10 games or so under their respective belts. I had seen the game played and I’ve even done an unboxing (or two)of it, so I had a general idea of what the game entailed.

What I wasn’t prepared for was how much the app really added to the game play experience. If you ask anyone who’s played an XCOM game they will tell you how brutal the game can actually be. Resources are limited, time is against you and the aliens are unrelenting. This board game has all of that! And it wouldn’t be possible if not for the App…

Because the App is able to monitor your progress and forces you to maintain a time limit for specific actions, it keeps the pressure up. Thankfully, the game is divided into two phases, dubbed the planning phase and the resolution phase. All the pressure happens during the planning phase – you are timed on your decisions and the aliens start piling on the board. The resolution phase is when the players can take a breath, roll dice and resolve those decisions they made under pressure.

This ebb and flow of “high stress” mixed with a slight reprieve is sorely needed for this type of game. What the App DOESN’T do is handle all the random dice rolls for you. It assumes you’re going to be honest with the results and allows you to report them once your done. That updates the “Board status” and the app then generates the next round.

You really have to give it a shot to truly understand what a different experience this type of Hybrid Board Gaming can me. It doesn’t take the fun out of the analog experience, it only enhances it.

Mansions of Madness is another hybrid from FFG. And it’s another game that totally nails the experience. I was a big fan of the previous edition and had quite a few adventures trying to survive the madhouse. But there is something even stranger (and better) about moving the game into this new hybrid experience. Because the game is running all the encounters (in terms of floor plans and what spawns were) it takes the pressure off the players to have a “GM” type running everything. You can just allow the app to do it things, and if you report your results truthfully, you’ll have a fun time.

I think the key difference between these two games and some of the previous attempts is that still make you feel like you’re playing a board game and not a digital game with some physical pieces that I don’t actually have to move. They don’t take the dice rolling out of the players hands and they don’t tell you the odds either. They are very much “App Assisted” and not App dominated. They blend both the digital portion of the game seamlessly with the analog portion and it works fantastically!

Look, I was super skeptical at first. I’ve seen it go poorly too many times to get suckered again. If you’re still unsure about picking up a copy, I understand – I was in the same boat. But I’m fortunate enough that I had a friend with a copy and that pretty much sealed the deal for me. So if you get the opportunity to play either one of these games with an experienced group I highly encourage you to at least try it.

~How do you feel about Hybrid Digital/Analog Games? Have you given either of these a try yet?