Every card I reference can be found on Yet Another Squad Builder. If I lapse into jargon and use terms you don’t recognize, let me know in the comments below and I’ll fix my mistake.

How if All Began

In the Winter of 2015, X-Wing was dominated by extremes of pilot skill. On the one hand, you had bottom-of-the-barrel cheapie lists that focused on  bodies above all– Academy Pilot swarms with maybe, maybe a Howlrunner or Dark Curse, or 4BZ lists with five ships at PS2. On the other hand, you had a race for the top, where even PS8 was just too dang low. If you were a turret ship, maybe you could get away with being “only” 7… but even that was just Dash Rendar. The majority of players opted to reach for the stars, going so far as to put Veteran Instincts (VI) on Han Solo (PS11!) just to make sure the edge was well and truly theirs. If your PS was anywhere in between, you were basically dog meat.

What a contrast to Worlds this year. What happened?

Pilot Skill in X-Wing is a tricky thing. If you took any of a ship’s core stats (attack, shields, hull) and increased it, that would be very valuable. If you took a given pilot’s PS and increased it… it could be a little useful, not useful at all, or enormously game-changingly useful. This is because of the nature of Pilot Skill as a largely binary system: you either are higher, or you are lower. The amount by which you are higher or lower than another ship is irrelevant. (Yes, I know, you can be tied, but that’s non-essential for our purposes.)

Pilot Skill is something you pay for. It’s built into part of the cost of the ships, whether you like it or not. More specifically, you pay for it in increments: you pay more for PS6 than you do for PS5. But if PS 6 and PS5 are equally useful, you’re paying extra points for nothing. Think again to that Winter of ’15. The upward pressure on PS was due almost entirely to the TIE Phantom or, more precisely, Whisper. If you couldn’t get up to PS9 to at least contest things, Whisper was going to kill you. So if you were paying extra points to push your PS up to a level that was still below 9, you were wasting points you could be spending on more ships (or ships that could get to those heights). Conversely, if you were fighting a swarm, you were going to outmaneuver them equally well if you were PS5 as if you were PS 8. Paying extra to get up to 8, in that case, was foolish.

This mindset was so deeply ingrained that Paul Heaver was able to skunk the meta at Worlds with the smallest of changes: though he was flying Han Solo with three Z-95s as escorts, he was able to spend three measly points to push those Zs up to PS4, gaining an advantage over the major swarm lists of the day at only a minimal cost.

Over the next year, with wave 6 and the Force Awakens sets, this began to change. The decloaking rules were famously errata’ed, for starters, which relieved some of the upward pressure on PS. But you still had a lot of PS9+ zooming about, along with a large number of low-PS, low-cost generics. Thug Life (four cheap Twin Laser Turret Y-Wings) replaced 4BZ and people stopped putting VI on Rear Admiral Chiraneau (as much), but the high-low dichotomy remained… except for one new archetype: Brobots. Two Aggressors with the IG-2000 title brought such shared utility, maneuverability, and power to the table that their PS6 wasn’t a major demerit. 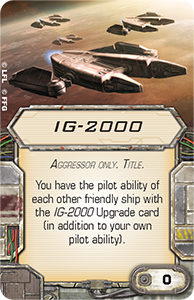 Who needs Pilot *Skill* when you have bonus Pilot *Abilities*?

Sure, some Brobot builds used VI, but others opted to leave IG and IG at PS6 in exchange for more versatility. The ship was powerful enough that, like Dash, you could fight aces with them successfully despite the PS deficit. Now, suddenly, the tables were turned: ships that sank extra points and the all-important EPT slot in the pursuit of higher PS were at a relative disadvantage to Brobots, who were themselves pretty comfortable fighting the swarms that bedeviled Falcons and Decimators.

This was the beginning of a new phase: if your ship is strong enough to tackle aces on its own terms, it doesn’t need to chase PS.

Crack Swarms (Black Squadron TIE Fighters with Crack Shot) broke from the cheapness-before-all paradigm, eating some points more to unlock that precious EPT slot than to get a PS advantage. Dengar has seen a ton of play as Scum’s go-to PS9 ace, but amongst the named pilot options, Manaroo turned out to be at least as important. Omega Leader, Miranda Doni, and the Inquisitor had pilot abilities that made them “aces” at PS8, below the traditional 9 or 10. The YV-666, Ghost, Attack Shuttle, and ARC-170 all feature pilots who can’t (or don’t) get above PS7, and all have seen abundant use in competitive settings. Good ol’ PS5 Biggs has made a strong comeback. With fewer players chasing PS9 and 10, Corran Horn has become a popular Push the Limit caddie in place of his traditional PS10 build. Adaptability gained some modest popularity as a way to push some pilots’ PS down to make certain squadrons easier to fly. And Imperial Veterans gave us “aces”– meaning highly maneuverable, highly expensive game-winners– all the way down to PS5. 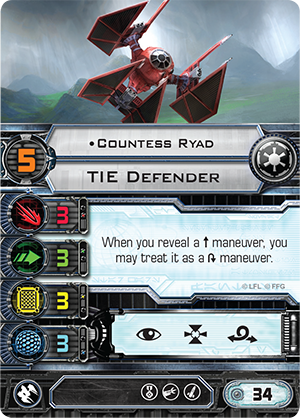 The Mistress of K-Turns laughs at your silly PS bid.

Welcome to the Mushy Middle

There are two categories of ships that are crashing the mushy middle of the pilot skill range. The first is support ships with abilities so valuable that their PS isn’t important. Biggs and Manaroo are the exemplars here. With his ability, Biggs could be *any* pilot skill and be a mainstay; he just happens to be 5. The second category is ships that have tricks or properties that let them tackle aces despite the PS deficit, but which can’t give up the EPT slot to chase a PS bid. Some of them don’t even have the option: Wampa can penetrate all the stacked tokens you can imagine but is stuck at PS4, while Countess Ryad can’t get above 7 even if you tried.

Let’s think about Omega Leader’s (OL) standard build for a moment (Juke, Comms Relay). His pilot ability is simply fearsome! Limiting your opponent to naked dice is a very strong ability, but even then, as a two-dice ship, he struggles to land hits. That’s where Juke comes in: because of OL’s pilot ability, Juke is knocking out one of the defender’s evade results every time, an infinite-use Crack Shot. Very few EPTs can offer a comparable boost to his offense, and the ones that do add complications that work against his kit or require list-building gymnastics. That offense boost makes a world of difference. Between OL’s pilot ability and pseudo-regen from Comms Relay, he doesn’t need to purely outfly a more-maneuverable foe; he just has to force the occasional joust, which he can win with action superiority. In other words, the offense boost from Juke is more valuable to OL than the alternative PS boost from VI.

That’s weird! It’s the sort of thing that didn’t happen earlier in this game’s existence. It’s the product of the synergy between a pilot’s ability and the available EPTs. The fact that such combinations are more valuable than Veteran Instincts’ PS boost is very healthy for the game.

Let’s not overstate the case too much. Fenn Rau, Dengar, Darth Vader, and our old pal Soontir Fel still derive tremendous value from being PS9, allowing them to use repositioning actions to outfly their foes while keeping the EPT slot free. High PS remains a valuable commodity: when Heroes of the Resistance introduced PS9 Poe Dameron, at two points more than PS8 Poe, many people thought it was an appropriate premium to pay to release the man’s EPT slot. But pretty much no one is suggesting that PS9 Poe is good because VI lets you push him to PS11– and that’s a good thing.

ChahDresh is an amateur writer and even more amateurish X-Wing player. If you think you know what’s coming next, let him know below.