The ancient Necron collector looks to be up to something nefarious on Cadia – but what?

The White Dwarf is here and look what it lays out for the Necron’s part in January’s Fall of Cadia:

Putting that through the French to English translator gives us this:

“Thief or Savior?
Of all the protagonists who are fighting on Cadia, Trazyn the Infinite is without a doubt the strangest. It is curiosity that drives him to Cadia, but he plays an important role in the first volume of the saga, Gathering Storm. Of course, some people are none too happy to see him, such as Belisarius Cawl. In spite of this, the Archmagos understands that the arrival of Trazyn in these dark hours is no mere coincidence. The Necron knows (or claims to know) the secrets of the pylons of Cadia. He also has another role to play, especially when he opens his tesseract crypts and releases his Imperial prisoners to fight the armies of Abaddon. But in this case, how will he make up for his rare collection?”

The Pylons of Cadia are longstanding anti-chaos artefacts that give the world it’s unique status within the Imperium: 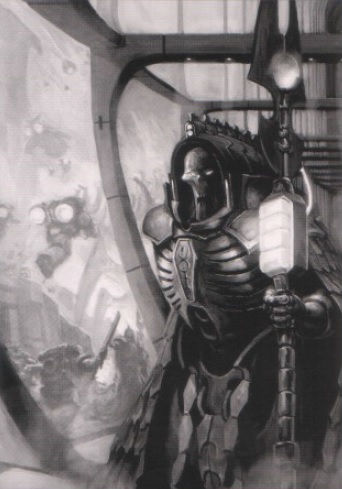 “a giant of a man clad in baroque power armor. his face contorted in a permanent scream”

~What do you think he’s up to?