X-Wing: The Ballad of Nien Nunb 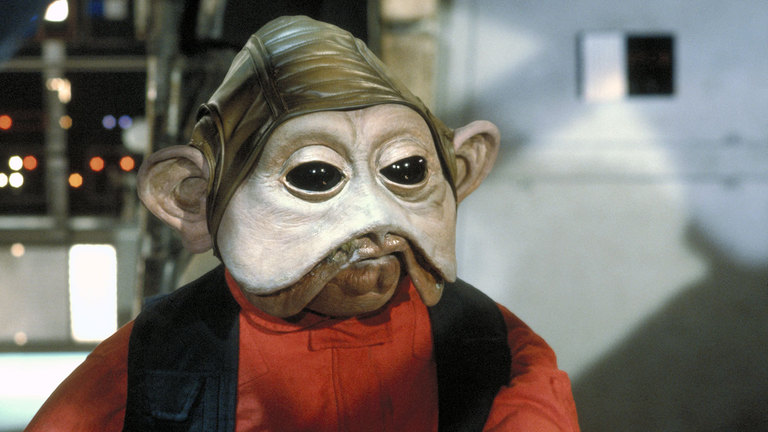 ChahDresh shares his love song for a Sullustan, and why he’s an amazing trickster in X-Wing.

We all have our pet pilots– the one we always want to carve a spot for in our lists, the one we always find ourselves building around, the one we reach for first when an opportunity to play pops up. Just plopping it on the table brings us unreasonable joy. This can be logical or not; it can be a good choice or not; for at least one person it was the Lambda-class shuttle. We all do it. Our pets can shift, too. 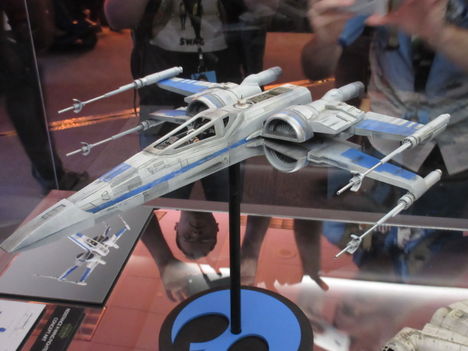 My favorite ship for a long time was Miranda Doni. She reminds me of the druid class in Hearthstone: solid, versatile, can go from a defensive footing to an offensive one in the blink of an eye. That was before Heroes of the Resistance, though.

I can now say I am all about Nien Nunb.

He’s a T-70 pilot at a modest 29 points. PS7 is reasonably high, and PS is a lot less important these days than it used to be. That’s because pilot abilities are more important than ever, and Nien’s got a doozy. 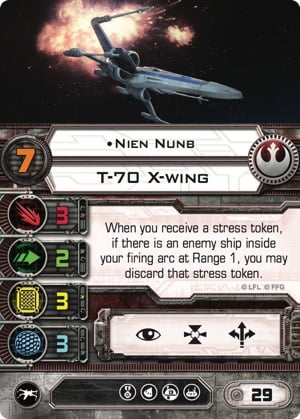 Note that there’s no limit to the number of times this can activate in a turn: so long as the conditions are met, it doesn’t matter where the stress comes from, nor how often, Nien will just ditch it.

Sure, this makes him a natural counter to control ships like the Stresshog and Asajj-Latts, and sure, it lets him use his K-Turns and T-Rolls freely so long as his landing spot gives him that range one viewpoint, but why stop there? Let’s give Nien tools that would stress him and abuse the heck out of them. I have two builds that are very different, but both great fun, that do just that. 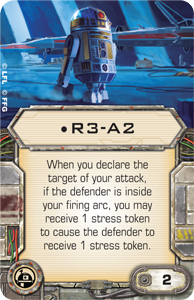 Let us all bow before R3-A2, the God of Stress! He’s been a Rebel favorite for a while, most recently with the classic “Stresshog” build. A Stresshog is a Y-Wing with a turret and the BTL title to get two attacks in one round, and thus (with R3-A2) two stress. That Y-Wing, naturally, is a high-priority, relatively easy-to-kill target, since the stress limits its dial and it’s, well, a Y-Wing.

Nien has neither of those problems. Get within range 1, and only the enemy gets the stress from R3-A2, allowing you to outfly them, pin them in place, and dismantle them.

It gets better! Combine R3-A2 with the loveliness that is Snap Shot. One of the nice things about Snap Shot is that it hits the enemy before they get their actions, meaning they have no tokens to use to defend themselves. Add R3-A2 into the mix, and they won’t get their tokens, because they’re stressed before they get to the “Perform Action” step. To meet the requirements to use Snap, the enemy has to also meet Nien’s ability, so you won’t get a stress of your own. Without their actions, the enemy will (of course) be stuck in front of you in the Combat Phase, letting you attack (again) and stress them (again) while ditching your own (again). 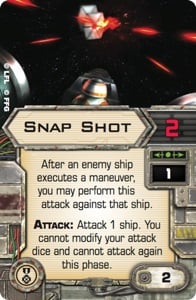 Congratulations! Even if the enemy survives, they’re so deep in the stress hole they’ll never climb out. Package this with a couple of heavy hitters or debuffers for maximum hilarity. My favorite underhanded combo: M9-G8. When your target is ultra-stressed, having to reroll one of their attack dice becomes very debilitating. And before then, as the FAQ clarifies, you can use M9-G8 to buff Nien– even his Snap Shots!

May I Have This Dance?

This is the answer to the question, “What would the love child of Soontir Fel and a TIE Defender look like?” While Snap Nien anticipates where the foe will be, Push Nien flies to get right behind their current position, coupling every tool in an arc dodger’s arsenal with an insatiable lust for blood.

Pattern Analyzer was a luxury for Snap Nien, but it’s essential for Push Nien. It lets you do lovely, lovely things. 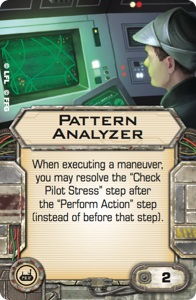 This lets you dance around nearly anything, from Phantoms to Interceptors to Defenders. Thanks to the T-Roll, you can arc-dodge those pesky white 4Ks while keeping up a barrage of your own. This makes him the squirreliest ship in the game:

Sure, you’ll be lower PS than some foes, but that doesn’t mean they can outfly you, not when Nien can whip around like that. You will end up behind your enemy, and once you’re there, you’ll be very difficult to shake.

R4-D6 is an insurance policy to limit your damage taken in case you make a mistake or face a heavy-hitting turret– provided you’re face-up on a foe, you get all the droid’s benefits and none of its downsides for a single measly point. Or you can just take R3-A2 for the lolz. And if you have another point to spare, Black One makes a mockery of target locks and the ships that rely on them.

There’s no telling how long my affections will last, or when I’ll be moving on to my next fling. And sure, these builds have their good and bad matchups– Push Nien is easy prey for Kylo RAC, for example. For now, though, Nien Nunb and I make beautiful music.

Should Morals Play A Part In 40K Games?