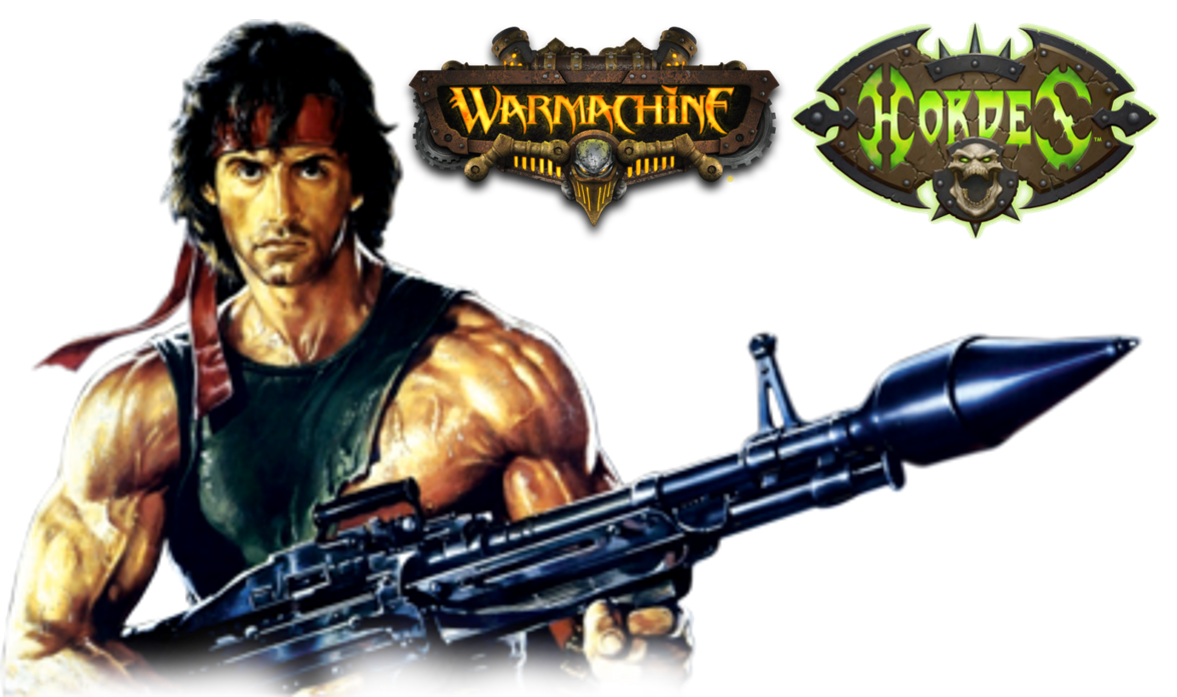 Ranking the top three “Super Solos” in Warmachine and Hordes.

This Week, Super Solos. What do I mean by Super Solo? I mean the toughest, nastiest, do-anything you need solos in the game. They’re the models that can reliably contest a scenario element on their own. The ones who can demolish a whole squad of infantry or knock out a heavy on their own. They’re fire-and-forget models that don’t need synergy or support. They just go in on the mission and take care of (most) everything. Super solos.

I’m weighing both attack and defense in this, as the most super of super solos have the right mix of both to be useful. And note, I’m purposefully NOT including potential buffs in the consideration. To be a super solo, you’ve got to be able to get it done all by yourself. Think of this as the short list of models that if you had only one model to try and hold an entire zone with for a game, this would be your choice.

So let’s get right to it! The following are my list of the top three Super Solos in Warmachine and Hordes. At the end is a bonus “Dishonorable Mention” for the most not-so-super Solo out there. 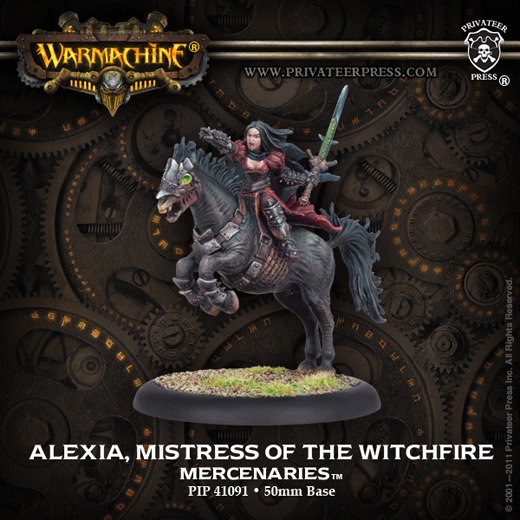 Versatile attacks and effective defenses give Alexia2 a huge edge when it comes to being able to Super Solo. On the attack side, she’s got a healthy ranged magic attack, and two melee attacks thanks to her mount. The mount also adds flexibility in her vectors of approaching foes thanks to impact attacks. On the survival side, she’s blessed with high defense, decent ARM, and a very healthy 10 boxes. She has Reposition 5″, which helps her survival all the more.

Against foes that yield souls, her offense and defense strengthens. Her ability to spawn weapon master thralls is a heck of a good start. They can both increase the attacking power she’s leveraged, as well as help hold objectives. Arcane Vortex for enemy spell denial ups her survivability further. With ability to buy and boost as well, in many situations Alexia2 can bring the pieces together into an impressively versatile solo. Left unchecked, Alexia2 can transform a battlefield. 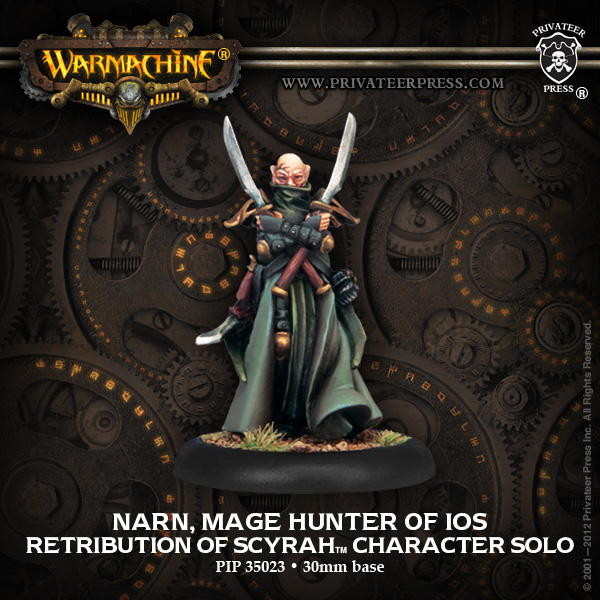 Narn is best summarized in a list: high defense, Acrobatics and Sprint, Stealth, Pathfinder, Parry, Blessed and Magic Weapon, 12″ ranged attack that silences targets, and two weapon-master melee strikes at respectable P+S 11. That’s a great start on Super Solo credentials. He can start contributing from range, and continue in melee while darting back 7″ after a kill. Narn has two melee attacks, so if his first fails he’s not completely out of luck. With ample defensive tech, opponents need to leverage some very specific methods to take him out.

His weaknesses are specific. Electro leaps (far too common these days), scattering blast damage, and boostable shots that see through Stealth. Many forces will have at least one of these. But this is why he is a good choice for Super Solo duty. The point is to leverage him in a place where opponents need to send those elements far off the main battle line to take him out. If an enemy gives undue focus on taking out such a protected model, then he’s honestly done his job. Against much rank and file infantry and solos, without help he can do a great deal of destruction. He’s going to die in most fights, but he’s got so many edges that he’ll cause undue focus on him. And that’s what you want your Super Solos to be doing.

Number One: Allegiant of the Order of the Fist 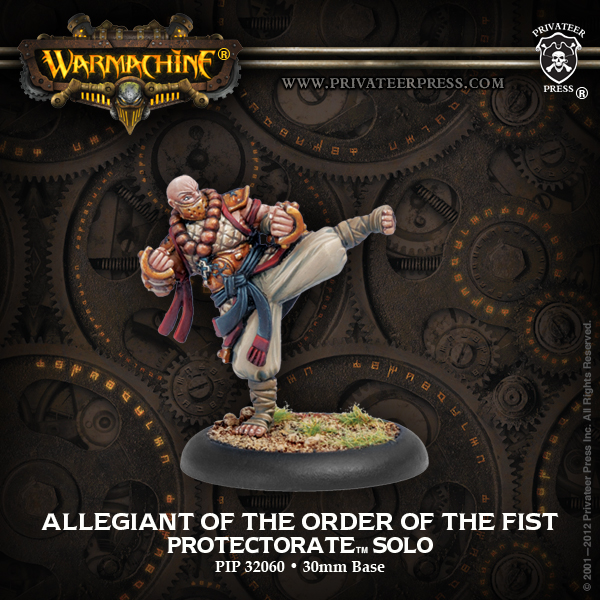 Ah, the humble “Punch Monk”. Yes, I know what you’re thinking. You’ve seen this guy die to some wild swing by an infantry model who rolled high. You’ve seen a drifting blast template or a slam just take him out in one random go. How could he be the best of the best Super Solo?

On his own, at a far flag where threats are limited, the Allegiant can be one of the most frustratingly tough models to deal with. It certainly starts with his Tough ability, enhanced by not being able to be knocked down. But it’s his Shifting Sands Stance that makes him so very slippery. He goes up to 18 DEF when he uses it, which means even “good” melee infantry at MAT 7 need 11’s to hit him. And it’s when he’s missed that he shines.

Each time he is missed, he gets to make a full advance. That’s a 7″ move, and no free strikes thanks to Parry. Consider the plight of your full 10-model flanking force charging in to get the kill. The first one that misses, this guy slips away and the rest lose their attacks. Usually he scoots around to behind two models–setting him up to sacrifice his Move for the stance, and getting two weapon master swings in rear arcs on two models. The unit is then down two, and have to repeat the process again. Eventually he gets locked in by sheer model count, attacked from the back, or enough support from warcasters/warlocks/models that boost to take him out. But at a measly 3 points, the amount of work it can take to get him dead is astonishing at times. 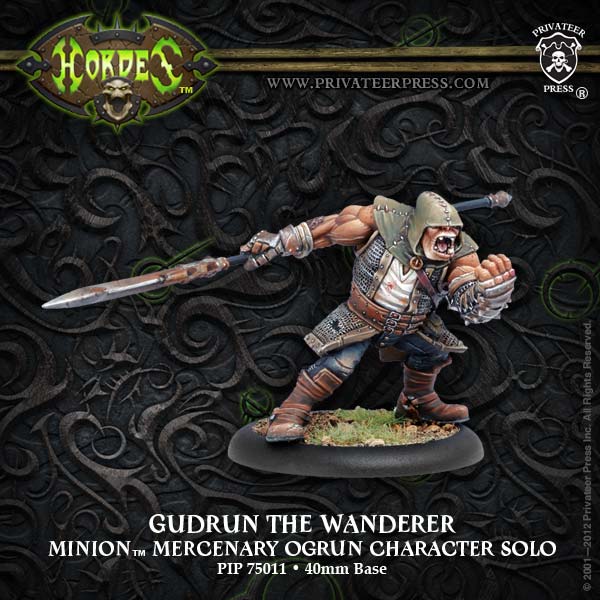 Gudrun the Wanderer. Certainly there are other solos that are weaker than this one. But this is the model that you’d think can be a super solo from an initial glance, but turns out cannot actually get the job done. I want to like him, and I want to see him fielded in the Super Solo manner. He does seem to have all the parts. Great ranged/magic protection thanks to Feign Death, made all the better by being able to simply knock himself down by choice once a game. Ability to take out lots of enemy models thanks to Berserk. And the whole “gotta kill me twice” ability that brings him back to life. Seems totally Super Solo, right?

The problem? Having to sacrifice move or action to stand up. Unlike the Allegiant above, he doesn’t have a way to give up that action and still be as effective. If the opponent happens to kill him with the very last grunt in a squad, and they’re all clustered around him? Maybe he can super-solo. But a player worth their salt knows how to stagger an infantry advance. Why cluster all 10, when 3 will do? Great super-solos can get back out of danger, but instead his survival ability just leaves him floundering in harm’s way.

At the end of the day, he’s one of those models that if he did Super Solo for you at any point, it was likely less because of him and more because of how your opponent approached destroying him.