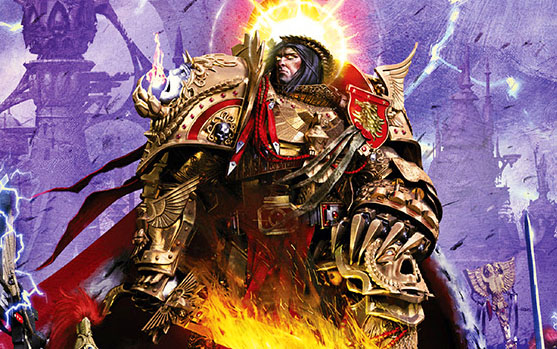 Another counterfactual for you–what would Fulgrim and Lorgar’s lives had been like, if the Emperor hadn’t found them…

A while back, we explored what the galaxy might look like if the Emperor had never found his missing “children” (though, as we all know, he regards them as his sons more out of convenience than anything else). We posited that Guilliman might build his own little Damocles Gulf-esque empire that is both maintainable and meritorious. Angron, on the other hand, met his end or fell to Chaos faster.

The Phoenician’s story is a tragic one. Winning glory for the Empire brought him into contact with a daemonic weapon that would one day cause him to kill his brother and closest friend.

Tullea, Corrin, and Sullax were labourers of the resource-poor world of Chemos sent to investigate a meteorite impact. Sent without transport, the three had to take shelter from a wire-storm in an abandoned factory. When they reached the impact site, they didn’t find a fallen satellite or spacecraft, they found an ever-shifting mass of light. Sullax was wary, but Corrin felt that it was harmless. Corrin watched the light take shape and it touched his mind, learning everything he did, before it took the shape of a perfectly-formed baby boy. Sullax wanted to kill the child, seeing it as a burden on their resources, but the child had entranced Corrin and refused. Tullea shot Sullax and neither of them felt any guilt over killing him to save the perfect baby. Noticing that a stream of pure water had formed where the baby had landed, Corrin decided to name the child after the water-bringer of Chemos’s creation myth, Fulgrim.

Fulgrim spent his early years as a humble factory worker, but soon became a legend in his own right. At half the age of his fellow workers, he was able to fulfill his obligations to the continual running of the fortress-factory of Callax with ease. He quickly grew to understand the technology he had to work with and began to modify it, increasing efficiency dramatically. By the time he was fifteen years of age, Fulgrim had risen from the rank of worker to become one of the executives ruling the settlement. Learning of the gradual deterioration of both Callax and all the other settlements of Chemos, Fulgrim decided that he would save his world.

Under Fulgrim’s leadership, teams of engineers travelled far from their factory-fortress, reclaiming and repairing many of the far-flung mining outposts. As minerals poured back into Callax, Fulgrim supervised the construction of more sophisticated and energy efficient machinery. As recycling efficiency grew to the point where Chemos was producing a surplus for the first time in years, Fulgrim began to foster a re-emergence of art and culture, aspects of humanity sacrificed in the struggle for survival. The other settlements allied themselves with Callax and, fifty years after arriving on Chemos, Fulgrim was its sole leader.

Had the Emperor never found him, Fulgrim might have been spared coming into contact wth the daemon weapon that corrupted his mind. It might also have kept him from obsessively emulating the perfection of the Emperor. Without that awe-inspiring figure to devote himself to, who knows how Fulgrim’s tendencies might have expressed themselves.

Perhaps he would have ridden the wave of the Chemos Renaissance (a wave that he started), ushering in a new era of art and philosophy and culture. We can look to the real world to see how the actual Renaissance changed the nature of things and then extrapolate that out into space. So with the resources of the mining world now actively at Fulgrim’s disposal, his sights turn to the next planet.

Fulgrim’s dedication to efficiency and sophistication of labor (all are expected to do their part) alongside the cultural revolution allows for a flourishing society to take place. A collection of nearby worlds blossom–Chemos is at its center, much like Venice, but at the head of each one, a potentate groomed in Fulgrim’s image. After all “it is only by imperfection that we fail…” so Fulgrim demands much, but in exchange offers much to any who join.

His empire of planet-states fosters a new era of discovery among them–but Fulgrim’s society is more insular than Guilliman’s theoretical empire. They are more interested in trading and the outflow of their cultural advances, rather than in expanding the boundaries of their empire. Chemosian art and philosophy spreads like wildfire to far-flung worlds, thanks to the miigration of Rogue Traders.

Much like ancient Greece, Fulgrim’s sphere of influence is held together by this shared culture, though I imagine the primarch is kept busy putting out fires (rebellions when his standards are too stringent, or when his idea of “efficiency” chafes) and making sure that it runs efficiently. Considerable effort spent on defense as the wealth of these planets draws the attention of other, greedier factions.

In the end, a proud (and rightly so) Fulgrim sits on the throne of a small Empire whose influences vast exceed its borders. 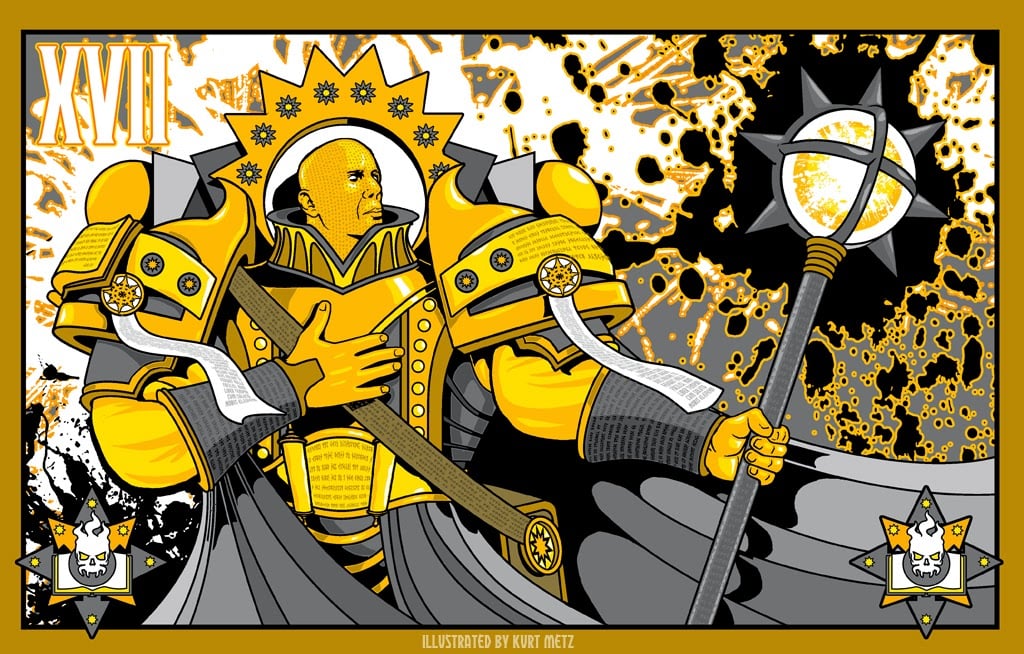 The infant Lorgar was discovered on the feudal planet Colchis by Kor Phaeron who followed the predominant religion on the world, the Covenant, and was raised amongst them. Studying under Kor Phaeron, Lorgar quickly became a devout preacher, his skill in oratory and the power of his charisma winning him many followers, rising to the position of Archpriest of the Godsworn. However, as Lorgar grew in standing amongst the people, members of the Covenant began to grow jealous of his popularity. Lorgar’s youth was plagued by visions of a mighty warrior in gleaming bronze armour coming to Colchis, a cyclopean giant in blue robes standing beside him. At one point, the visions reached such intensity that Lorgar claimed that the prophesied return of Colchis’ god was soon to occur. He began to preach this news to the people of Colchis, causing disruptions to the rule of the Covenant as people converted to his beliefs. Lorgar’s enemies in the Covenant saw this as the opportunity they had been waiting for to remove the threat that Lorgar was to the status quo, declaring him a heretic.

Those who came forward to arrest Lorgar were killed by his followers. The Covenant split into two factions the followers of the Old Faith and the Brotherhood of Lorgar, and a holy war of immense proportions known as the Schism Wars erupted. Eventually the entire population of Colchis was forced to choose a side. This war lasted six years, ending when Lorgar and his supporters stormed the temple at which the Primarch had trained, killing the monks of the Old Faith within. Possibly as part of this conflict, or after it, one in three of Colchis were said to turn against Lorgar, and the first Great Purge was conducted by the Brotherhood’s fanatically loyal warrior-monks hand-picked by Lorgar.

So in the wake of a literal holy war, Lorgar ends up at the head of a fanatical order of zealots, which sounds redundant, but you have to understand these guys are fanatics even for zealots.

But let’s go back a little and assume that Lorgar isn’t plagued by visions of the Emperor and his friends coming along. I expect that Kor Phaeron, who already had begun to worship aspects of Chaos…calling it “The Old Faith” on Colchis, would have slowly brought around Lorgar in a Palpatine-esque manipulation, leading Lorgar to believe that he, Lorgar, was the leader the Covenant’s faith heralds.

With the weight of Prophecy behind him, acting as beacon and target, Lorgar attracts a zealous following. And like before, is painted as a heretic as an opportunity attack by his enemies within the Covenant. Lorgar takes harsh actions, much as before, but as the dust settles, finds himself sitting on a throne, with nothing to offer his devotion to.

With nothing to fill the void he yearns to fill–after all he’s the one who began the Imperial Cult, worshipping the Emperor, he was always looking for something to place his faith in… enter Kor Phaeron with promises and whispers of the truth. Though perhaps not quite as far gone as he was during the heresy, Lorgar and Phaeron seek out the mysteries of Chaos together. Lorgar absolutely falls–but it is in an interesting way. And it is not without cost.

There is another great religious war that sweeps the face of Colchis–Lorgar bears witness to the powers of Chaos as he calls upon them to smite perceived “heretics” and finally finds a purpose. But…as the ash and blood settle, it’s only a matter of time before he grows restless. But now, he has a vessel for his devotion–and the ruinous powers have a weapon they can point at any target. What use have they for Abaddon (who will clearly fail them for the last time) when Lorgar is ready to spread the word… and so begins an insidious dark crusade. One not of conquest…but of conversion. And Lorgar himself builds an organization very like the Ecclesiarchy. Ready to spread the dark word of his masters.

Author: J.R. Zambrano
Bell of Lost Souls Staff Writer and DM, J.R. covers RPGs of all stripes and on occasion eats sandwiches. You can ask him about either at [email protected]
Advertisement
Editorials Horus Heresy Lore Warhammer 40k
Advertisement