Blades of Khorne: The Bloody Battalions

We are wrapping up our week of Blades of Khorne coverage on BoLS. Let’s take a look at some of our favorite new Battalions.

Welcome to  Chaos Battletome: Blades of Khorne, the latest GW Age of Sigmar book dedicated to Chaos.  We’ve been buried in Age of Sigmar Khornate models since the Summer of Sigmar back in 2015, and the Brass Throne is back for more.

This book is a new style Battletome that is fully in line with recent post General’s Handbook releases such as Beastclaw Raiders and Disciples of Tzeentch. That is, you get Allegiance Abilities, Artifacts, Gifts, Blood Prayers, and last but not least, Pitched Battle points.

The book builds heavily upon the Khorne Bloodbound and Daemons of Khorne sub-factions already found in the Grand Alliance Chaos book. All of those units are in Blades of Khorne and many new battalions.  Let’s take a look at the table of contents: 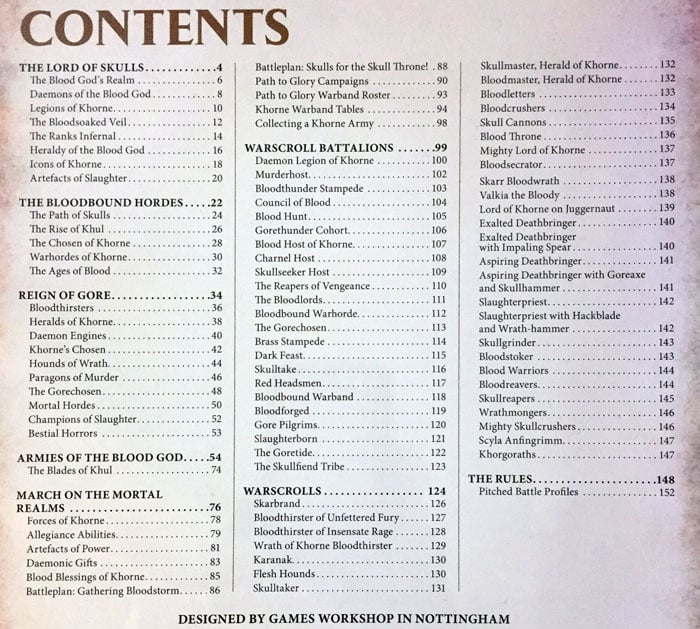 Notable new arrivals are the huge pile of Battalions from the groundshaking all Bloodthirster Council of Blood to the steroid infused Blood Pilgrims.

We’ve already gone over the hallmark Blood Tithe and Blood Blessings, so now it’s time to dive into a couple of the crimson battalions of the Brass Throne.  You’ll need to pick up the book to see the full list of 23. 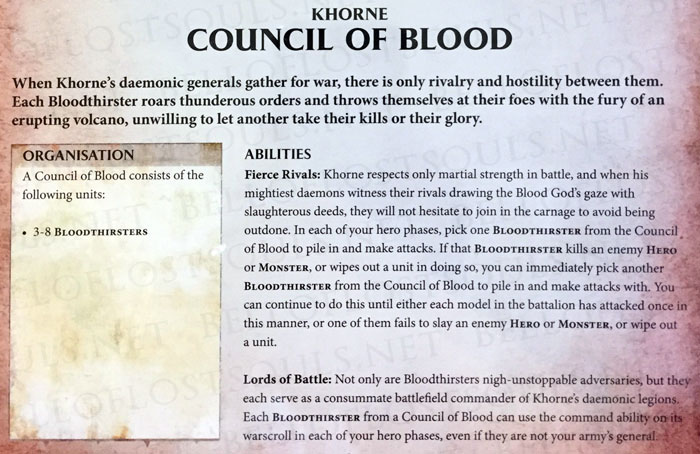 The Battalion for gamers who are obsessed with collecting Bloodthirsters.  If you already have 7 in your collection, now you can give in and pick up one more.  I’m thinking that not much is going to survive that combo-charge! 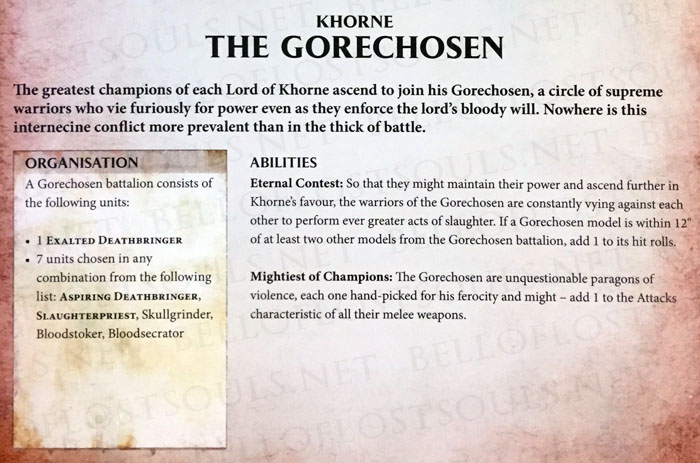 Here is the beating heart and ruling council surrounding a Khorne Lord. Now you have a reason to collect 8 of those Khorne champions, or pick up a copy or two of the game with the same name to grab the minis and save yourself a lot of cash. 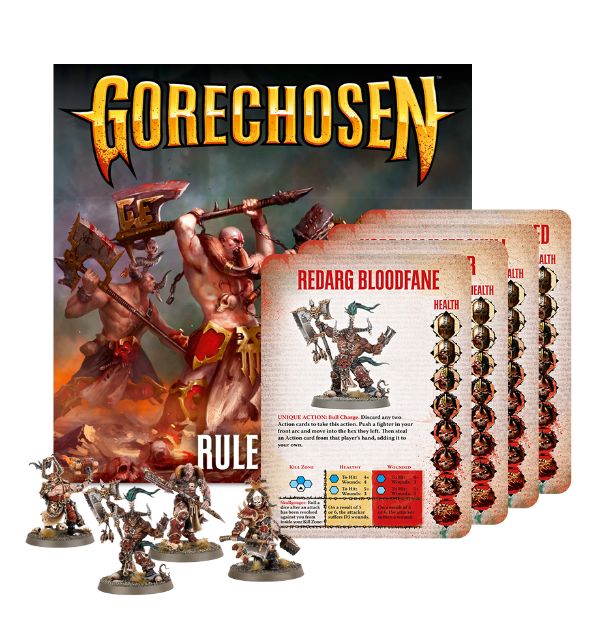 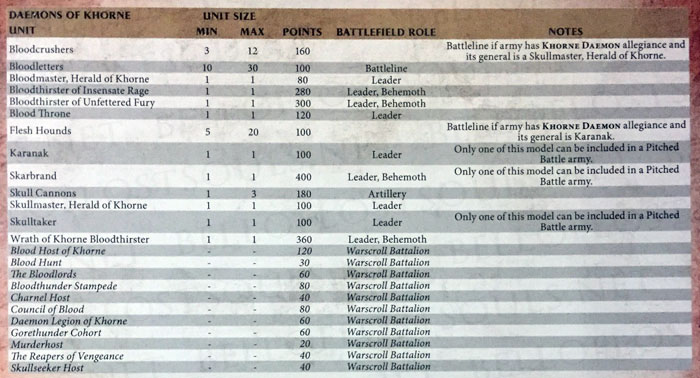 Finally we take a peek at the new battalions costs for the Deamons of Khorne.  The book is solid and you will need to grab your copy to see the details on the mortal followers of the blood god. 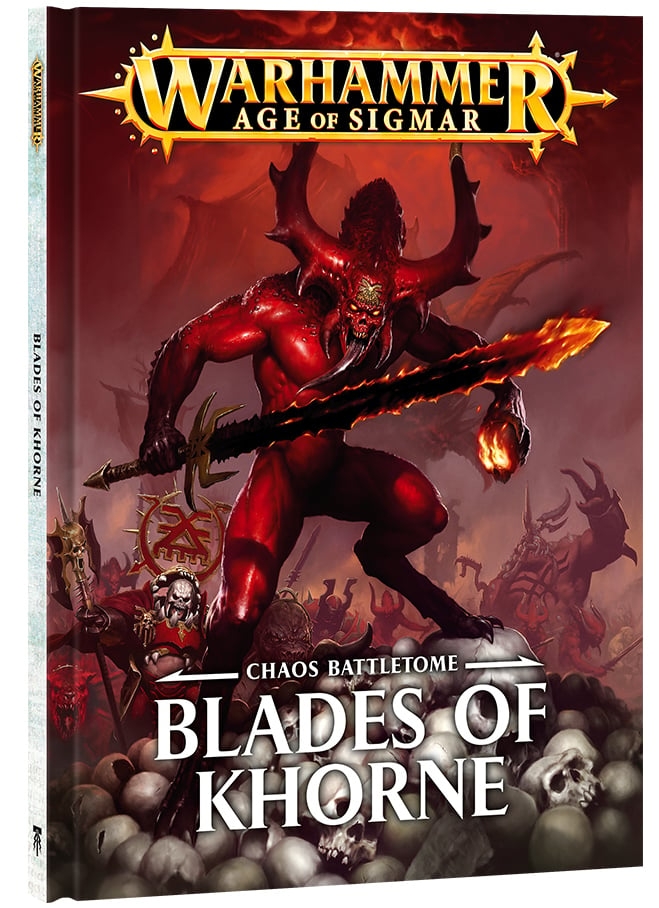 BEHOLD THE REIGN OF GORE

Battletome: Blades of Khorne collects together the rules and background you need to combine the Khorne Bloodbound and Daemons of Khorne into a single bloody fist, ready to smash down upon the worlds of Warhammer Age of Sigmar. Manifestations of primal rage and senseless bloodlust, the daemons of Khorne are far from subtle, shunning the trickery and deceit of magic in favour of crushing physical might. His mortal followers fight with comparable ferocity, hoping to gain enough favour to tread the path of skulls and ascend to blood-soaked glory.

– A detailed explanation of the machinations of the Blood God – how his kingdom in the nightmarish Realm of Chaos functions with his Brass Citadel at the dark heart, as well as guides to the daemons of Khorne and his mortal followers, the Bloodbound;
– The Ranks Infernal – an overview of the supremacist hierarchy of Khorne, from the Exalted Bloodthirsters of the First Host down to the Legions and Charnel Hosts;
– A particularly grisly look at the icons, weapons and heraldry of Khorne – images of grinding industry, descriptions of cruel, rough-hewn axes and the colours of the claws, horns and teeth that define the look of the Blood God’s armies;
– The Ages of Blood – this is a timeline of key events and battles since the last days of the Age of Myth, in which Khornate armies have littered the landscape with corpses;
– Information and details on every daemon of Khorne, and every one of the Bloodbound; each of the faithfully bloodthirsty covered in grim detail.

A host of rules and abilities for Khornate armies both daemon, mortal and mixed:

–        Allegiance Abilities allowing a Khorne army to draw from Battle Trait and Command Trait tables, featuring suitably brutal rewards (heal units after a kill, add to the Attack characteristics of weapons, leverage blind fury to re-roll attacks and much more);
–        Blood Tithes –  a Khorne army generates Blood Tithe points whenever a unit belonging to any player is destroyed. Khorne cares not from whence the blood flows! These can be expended for rewards from the Blood Tithe table; these rewards range from the calamitous to the apocalyptic…
–        Artefacts of Power – potent tools of death and destruction wielded by mortal or Bloodbound Heroes in your army;
–        Daemonic Gifts – deadly weaponry and powerful icons for daemonic Khorne Heroes in your army;
–        Blood Blessings of Khorne – ancient rites and rituals performed by Khorne priests – these sacrifices allow them to call upon their infernal master for aid;
–        2 Battleplans – Gathering Bloodstorm and Skulls For the Skull Throne! – which epitomise and showcase the brutally efficient fighting style of the Blades of Khorne;
–        33 Warscrolls – rules for fielding mortal and daemonic Blades of Khorne miniatures in your games of Warhammer Age of Sigmar, with 23 Warscroll Battalions providing extra rules and tactics for specific collections;
–        Pitched Battle profiles featuring points valued for every miniature and Warscroll Battalion, for use in Matched Play games.

~I will close out this one with my favorite story of the philosophy of Khorne, drawn from the pages of a long lost and out of print Liber Chaotica. 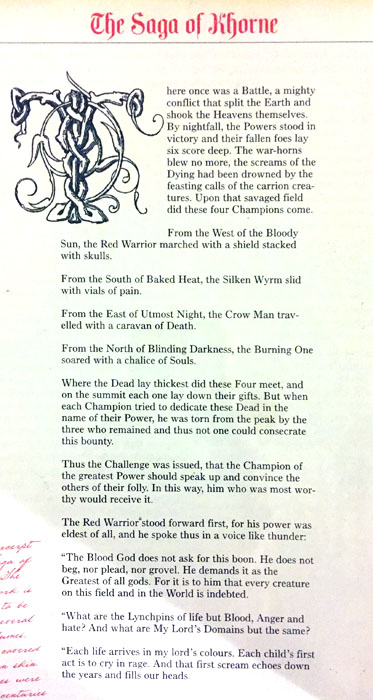 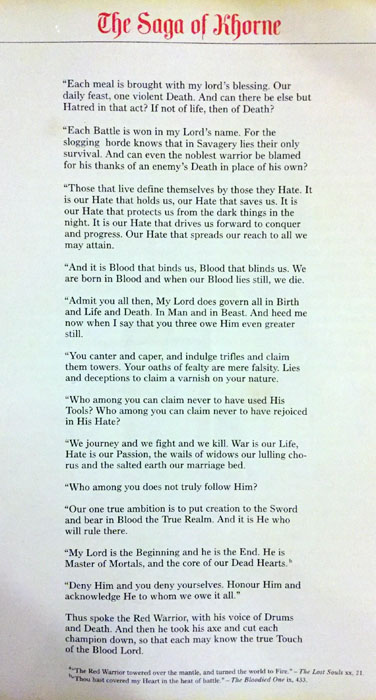