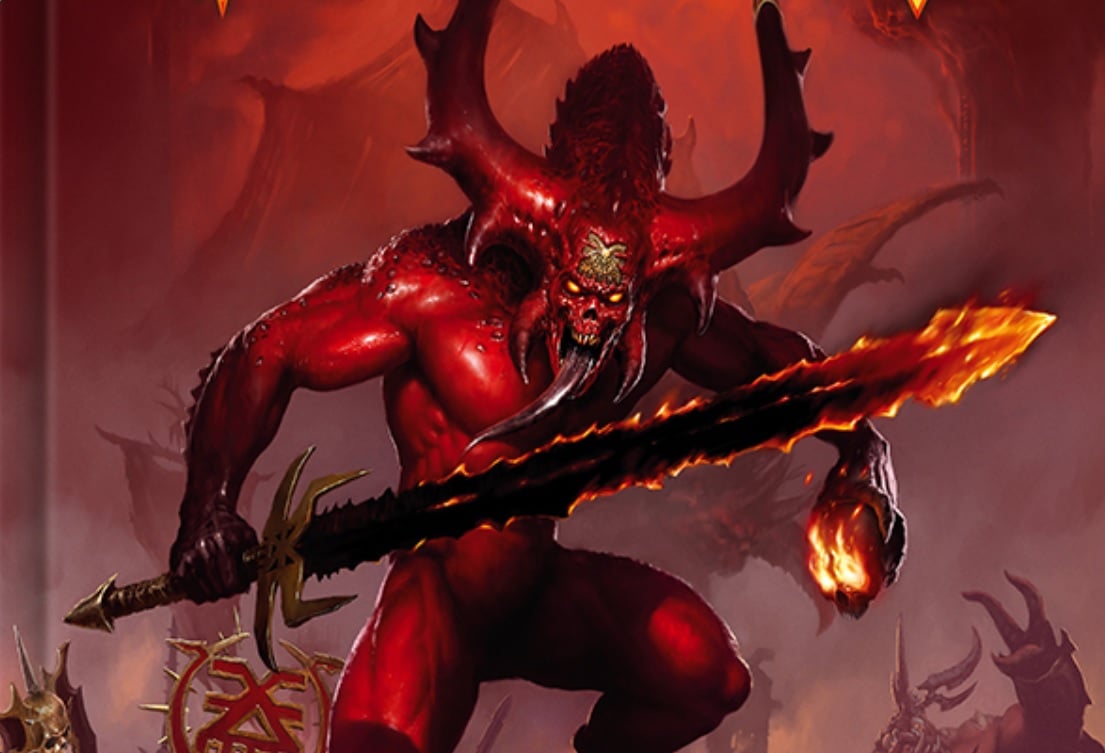 The Blades of Khorne are coming this weekend – Check out what’s on the way from Games Workshop.Khorne cares not from where the blood flows and his ferocious agents don’t either. We got a look inside the next Chaos Battletome: Blades of Khorne and it’s everything the Skull-taker ever wanted:

The Blades of Khorne is a book very much in the same spirit as the Disciples of Tzeentch battletome. This book focuses entirely on the followers of Khorne, both the Mortal and Daemon followers. The book doesn’t have any new models but it has some fun new formations, rules, artifacts, and pretty much all the other window dressing we’ve come to expect from the new style battletomes. 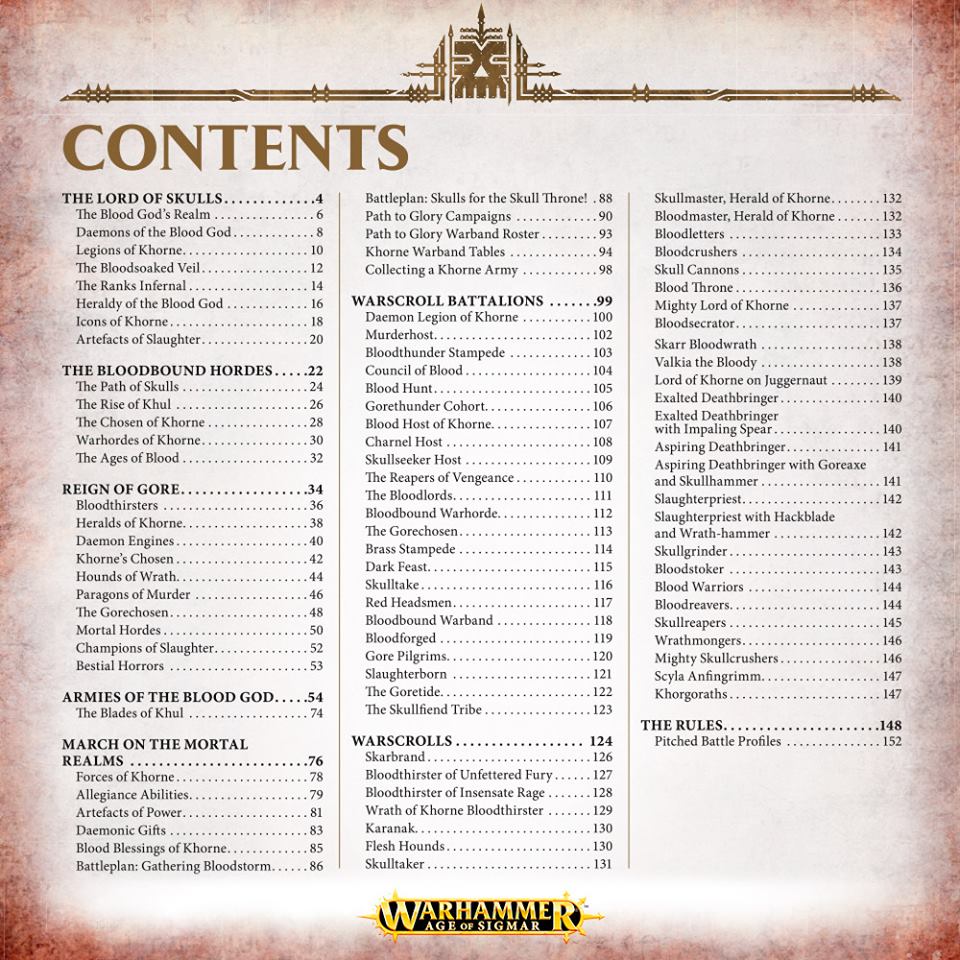 Now, I know some folks might be burned out with all the focus on Khorne because the Blood God’s Goons have pretty much been the main antagonists since the launch of AoS. Those folks might also be disappointed there are no new models for Khorne, either. But I don’t think that the Khorne line really needed any new models – that’s not the point of the this book. Much like the Stormcast Eternals book, this one is your one-stop-shop for all things Khorne. 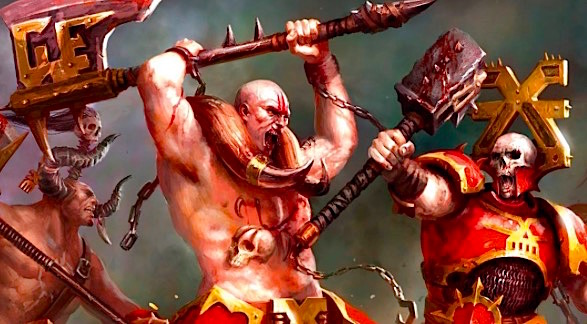 I know a lot of folks are really just interested in the rules and the cool new things you can do – I get that! Goatboy did a pretty solid job going over the new Blood Tithe Table and the Blood Blessing already. I also like to look at those things, however, I feel like a lot of folks just want to skip over the lore aspects of the book. Those first 30-35 pages mention some pretty cool things. Here are just a few examples of what I’m talking about: 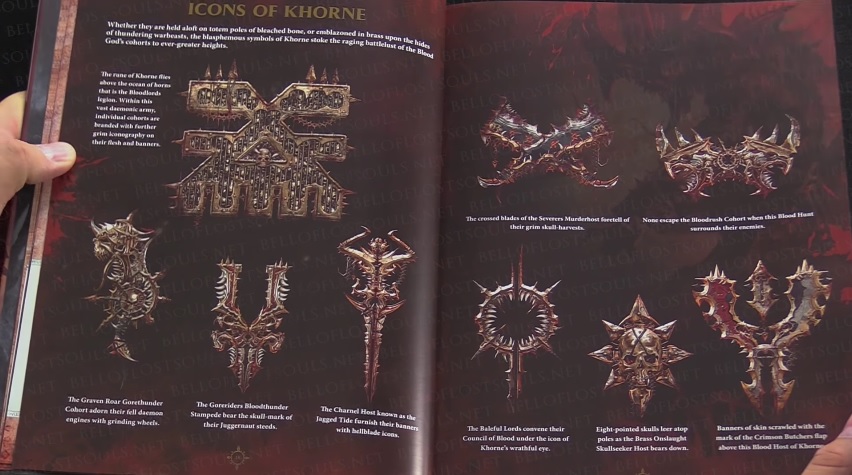 The Icons of Khorne pages are pretty neat – the artwork is that creepy mix of spikes and baroque that Chaos (particularly Khorne) really pulls it’s look from. There are lots of strange sights to see here… 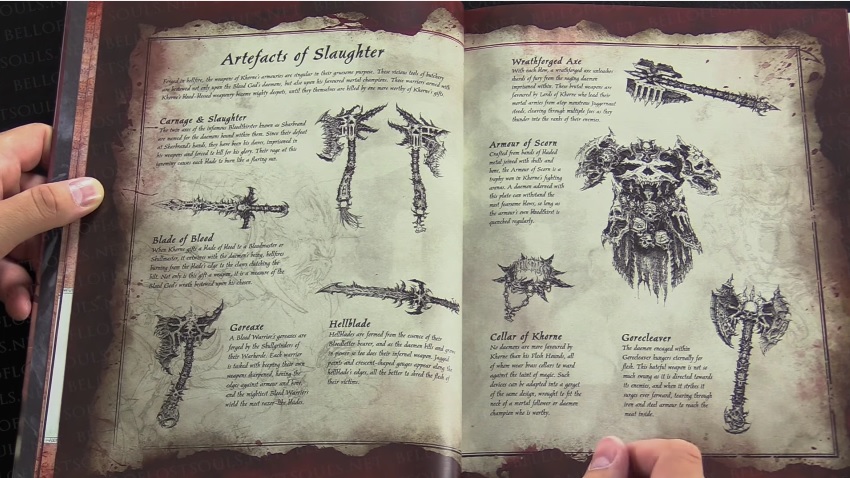 I really enjoy looking at the artwork for the weapons and armor. For example, Skarbrand’s axes “Carnage & Slaughter” get some love here. It’s cool to see the artist rendition of those weapons and look at the model to see how close they are. Plus the bit of lore for all these items is just fun to read about. 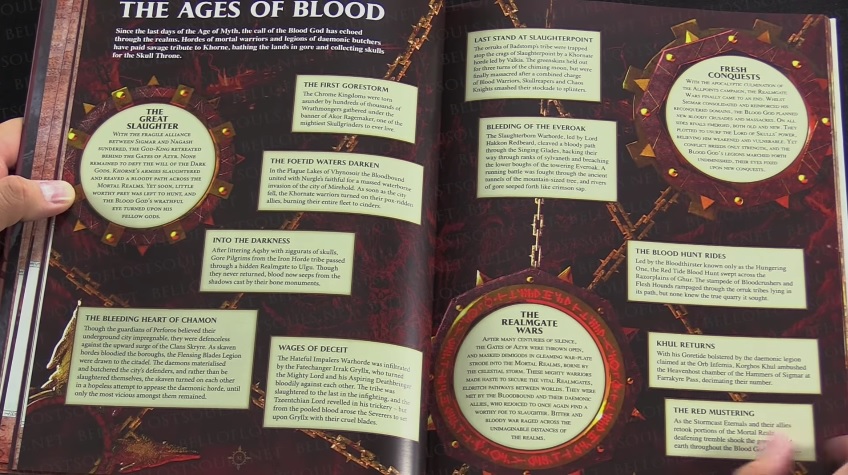 Here here we have one of those whacky “Catch-22” style timelines. (Catch-22 as in the format of the book, not the idea of a Catch-22. If you read the book you know what I mean.) Following the order of these requires you to read them all first – then you can figure out the how this “flow chart” is laid out.

Also in the book are all the Warscrolls, Battalions and points as well. We do skim through a few of those, but you’ll be able to find all the rules for them online from Games Workshop or the AoS App when that updates as well. But, as another example, I wanted to show off my pick for “best named battalion” in the book: 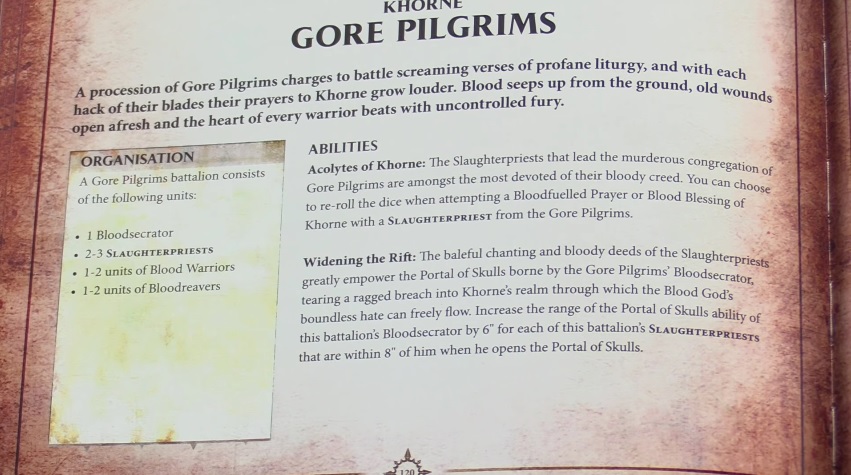 Rules wise, the extra range on the Slaughterpriest’s Portal of Skulls is nice, but for me it’s just the picture I get in my head from saying “Gore Pilgrims.” 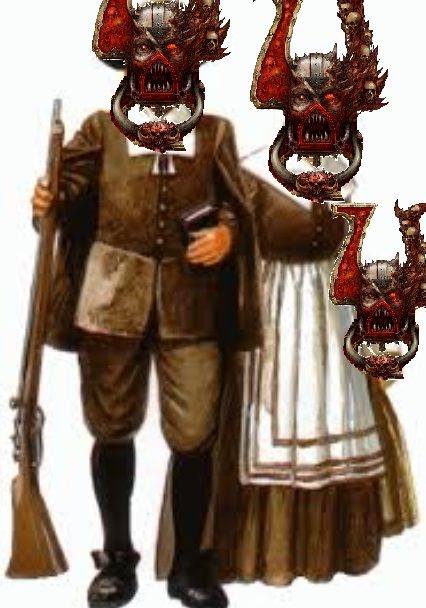 Turkey Skulls for the Gravy-Throne!

If you’re a AoS player and you’ve been dabbling with Khrone then you’re going to want to get your hands on this book.  It’s got some good stuff in there and it’s everything you need in one spot. 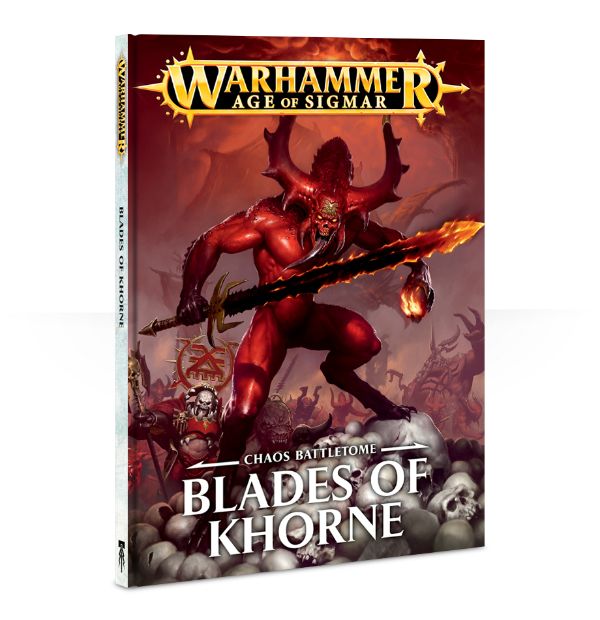 Bring on the Skulls!

Author: Adam Harrison
Writer, Editor, Texas Native, and Austinite for 15+ years, Adam covers all things Tabletop Gaming. Which includes Warhammer 40,000, Age of Sigmar, D&D, Board Games and everything else that involves dice, boards, cards and a table. A hobbyist, player, and collector of miniatures and games, Adam's current obsession are his Death Armies for Age of Sigmar, his Blood Angels and Tyranids for 40k, and his ever growing Arkham Horror: The Card Game Collection.
Advertisement
Age of Sigmar AoS Chaos Rules Tabletop News Videos
Advertisement