I’m Raven Jax, and today we’ve got to start at the beginning: Getting Started with Star Trek Attack Wing.

I’m a die-hard Star Trek fan, and was very happy to find that I loved the mechanics of the game as well. So thanks to BOLS, I’m going to start up what I hope to be a fairly regular column about Star Trek Attack Wing (often abbreviated as STAW).

I’m going to try to hit all sorts of topics about the game, from strategy to product reviews to missions and events. For this first article, though, we’ve got to start at the beginning: 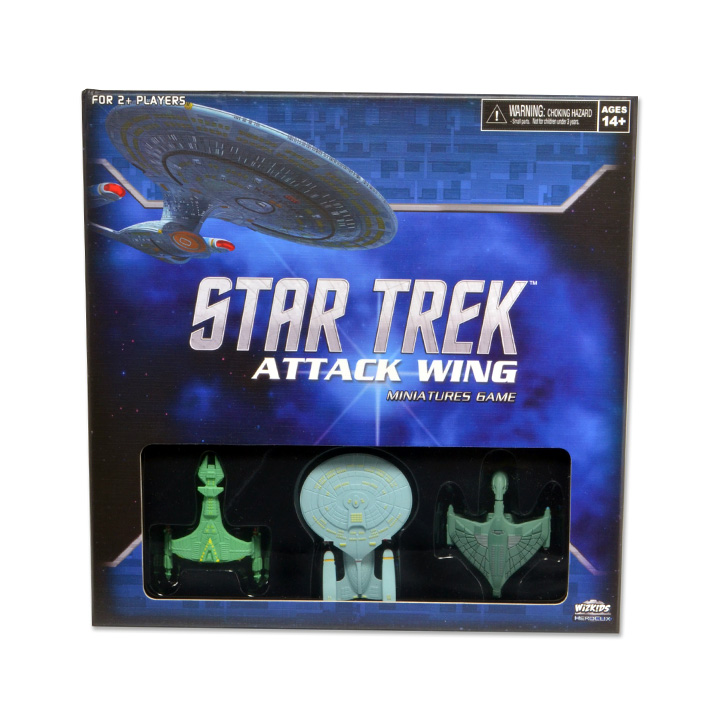 What is Star Trek Attack Wing?

Perhaps the easiest answer is to say that it is the Star Trek version of FFG’s X-Wing. Both use maneuver templates and range rulers dubbed the “FlightPath system” pioneered in 2004 by World War I flying combat games like Wings of War and Wings of Glory.

For anyone who might not be familiar with X-Wing, here’s the gist: You have a small fleet of spaceships that you chose how to maneuver. You then use cardboard maneuver guides to move the ship. You then perform an action that helps your ship in some way, typically making you better in combat. Finally you attack, rolling a number of attack dice. The ship you are attacking rolls some defense dice and can cancel out your attack if they roll well. If they don’t, then they take damage.

Both X-Wing and STAW are a bit more complicated and a lot more fun than that one paragraph description, though.

So how is STAW different than X-Wing? 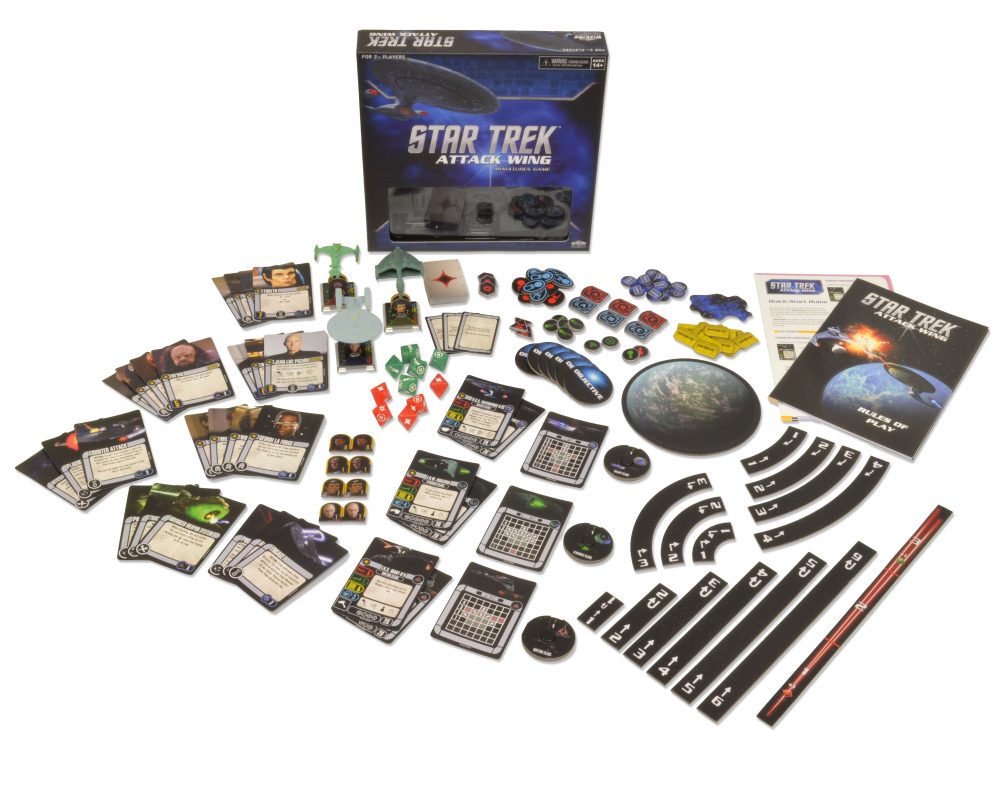 How is it Better than X-Wing?

STAW, frankly, has much, much more variety than X-Wing, and that’s because of two main things: missions and ships.

Missions: This is the main thing I love about STAW. Unlike X-Wing, it’s not just line up against each other and blast each other apart. You can play that with Star Trek, but the vast majority of events involve missions with special rules, special abilities, and special victory conditions. These missions are all inspired from episodes of the TV show and movies. Some missions are even joined together in multi-month campaigns you can play at your FLGS.

Let’s look at one of the most recent campaigns: the Original Series movies. Wrath of Khan featured a battle in a nebula, where no shields could function, ships couldn’t fire torpedoes, and ship movement was restricted. Then for Search for Spock, you had to rescue your crew from a burning planet while they fought on the planet’s surface. And Voyage Home featured an alien probe that flew across the field, draining power, making your ships unable to attack or defend if they got too close.

The mission variety also means you’re not just taking the same ships over and over and over again. Sure, a ship that rolls lots of attack dice is usually good, but it might actually be horrible in a particular scenario. Ships and cards that you think would never see play actually wind up being a viable strategy for certain events.

And I’ve seen lots of game stores be inspired to create their own missions. On a recent casual night at my FLGS, we played with house rules the tournament organizer had written that were inspired by the Deep Space Nine episode “Trials and Tribble-ations.”

Ships: X-Wing has three factions. Star Trek has 13. Not all of them would be considered major factions, but it leads to a huge amount of variety. You don’t have to play “faction pure” with STAW. So if you want to take a Federation ship, Romulan ship, and Klingon ship in one fleet, you can.

Also, unlike X-Wing, there’s no pilot assigned to a particular ship. You can mix and match any captain with any ship. (Think of it like putting Wedge or Poe on a Y-Wing).

This means that people bring incredibly diverse builds to events. In all honesty, in two years of playing STAW I’ve never been to an event where two people had the exact same list. There’s no “Fat Han” build that you can guarantee is going to show up to a tournament. 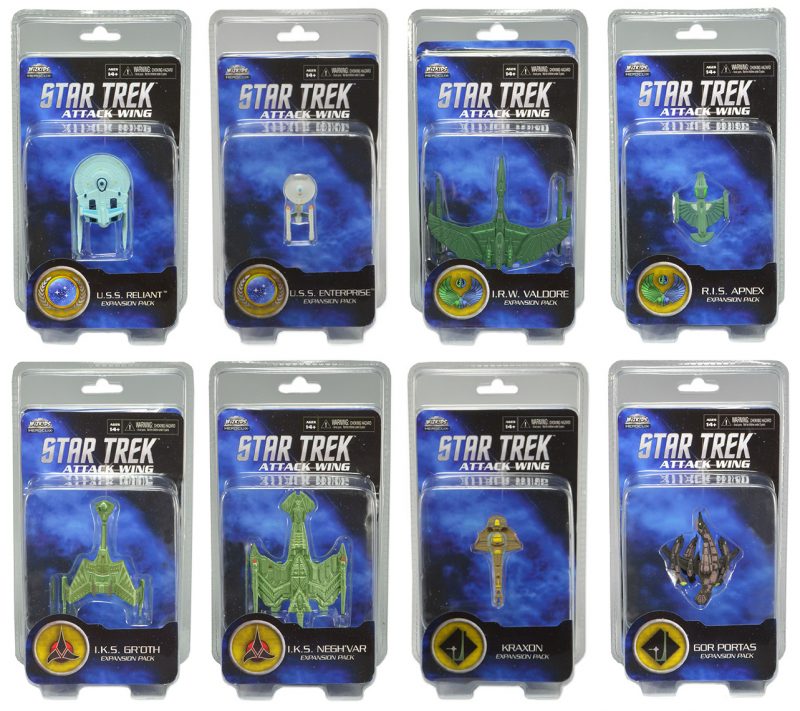 How is it Worse than X-Wing?

No bones about it, the models aren’t painted nearly as nice. WizKids, the company that makes STAW, is most well-known for publishing the game Heroclix. It’s a popular superhero game, but it has a reputation for having budget, lower-end painted plastic models. In fact the first few waves of STAW ships were all models taken directly from a limited release of Star Trek Heroclix.

WizKids has been working on improving the paint scheme, and some of the ships do look quite nice, but most are still not quite up to X-Wing standard.

Still, 40K starts out with chunks of grey plastic, right? It shouldn’t be too hard for this crowd to do some model repainting.

The other advantage X-Wing has is FFG’s focus on Organized play and community engagement. In terms of customer service and how much attention they give a particular game, FFG has a stronger organized play focus. WizKids is usually focused on Heroclix first, with their other games sometimes lacking for attention. They maintain a STAW online forum for people to ask questions and get rules confusion cleared up. 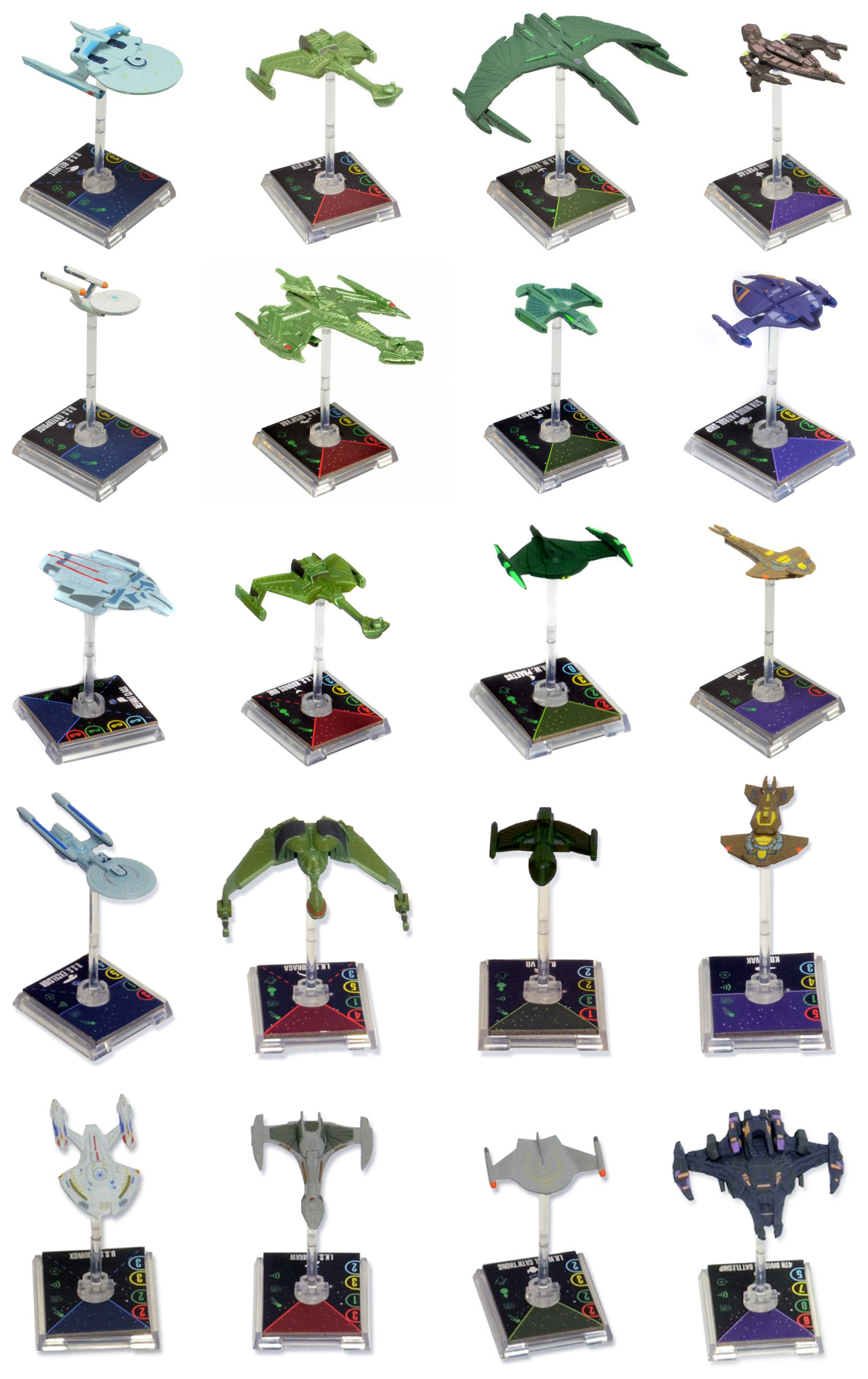 So, if I’ve been able to convince you to give Star Trek Attack Wing a try, how should you get started?

Many stores will run casual nights for new players. If you show up to one of them, it’s highly likely one of the regular players will have a spare fleet you can use.

Eventually you’ll need to pick up the starter set, which typically sells for $40 US/£32/€37/$52 AUD. That will come with three ships for you to use, captain, crew, and upgrade cards, plus the maneuver templates, dice, damage cards, and other tokens you’ll use to play the game.

Plus, unlike X-Wing, you can play a full fleet right out of the box. The three ships you get (one Federation, one Romulan, and one Klingon) can be combined into a fleet you can take to a tournament immediately if you wish. And with some of the good upgrades in the Starter Box, you’ll do quite well!

I hope this has been an enlightening intro to the game of Star Trek Attack Wing. If this seems like a familiar read, it’s probably because BoLS has already posted two stand-alone intro articles, one in 2013 and one in 2014. I’m hoping to get into a little more depth on the game, so next time I’ll break into what each of the factions do and their playstyles. If you have any questions or comments, please leave them below! 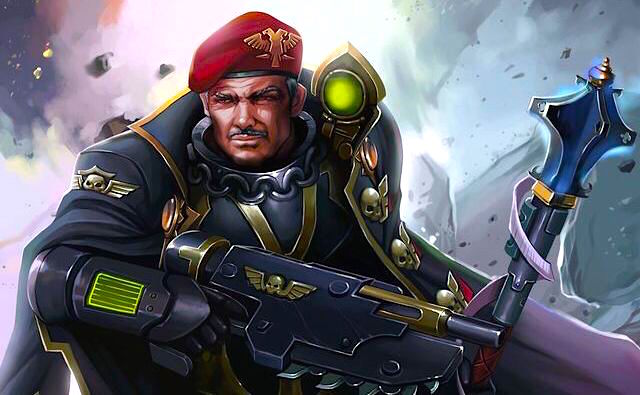