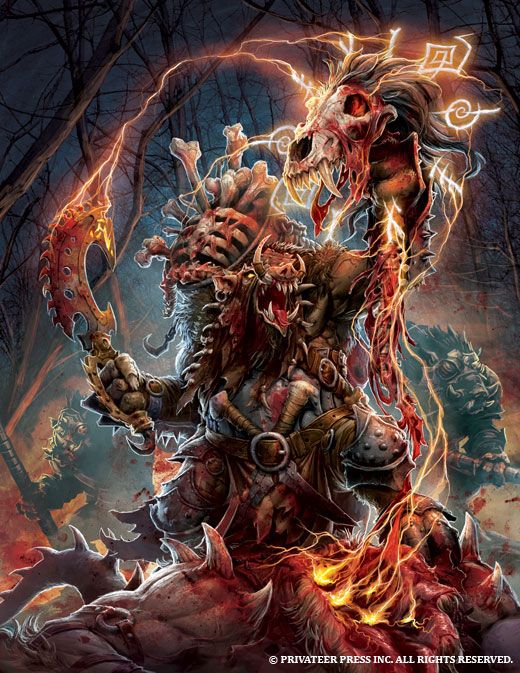 Ranking the top three Minions Warlocks in Warmachine and Hordes.

This Week, we’re getting close to the end of the various Factions in the game. Just Minions and Grymkin left to rank. With Grymkin being the newest kid on the block, Minions get their shot first. With a variety of options in Warlock, Minions are not some “little brother” faction in the game. They’ve got all the tools to be competitive with their Warlocks, whether offensively or defensively.

So let’s get right to it! The following are my list of the top three Minions Warlocks Warmachine and Hordes. At the end is a bonus “Dishonorable Mention” for the Warlock who deserves to stay at home in the swamp or hog pen. 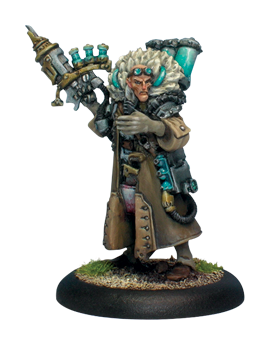 So Dr. Arkadius is a complicated Warlock. He’s got a lot of spells, a lot of text on his card, and a Feat that seems to do exactly what you’re trying to prevent as a Hordes player. For those who aren’t intimidated by the complexity, Arkadius is a nasty, nasty puzzle when he gets solved.

Once a player sorts out how to set the Feat, it’s advantage is HUGE. In particular, it can allow crazy threat range. Getting a free charge toward a foe of a choice, and then turn around to allow those models to charge again? Powerful stuff. With a large control range and ability to reposition forward to keep everything ready, his Warbeasts get into unexpected spots. Non-linear threat is one of the best powers in the game, and he’s got it for every warbeast in his force.

Then layer on spells that exactly help his Beasts make even more of it when they get there. Mass healing, powerful debuff, and an upkeep strength buff are all powerful. But it’s Hyper Aggressive that really makes things hum. By forcing opponents to fear putting early damage onto Beasts, lest they advance even further, it can not only keep his force alive but can leave an opponent struggling to decide how to face him. And one little mistake is all it takes to send hogs screaming down the foe’s throats. 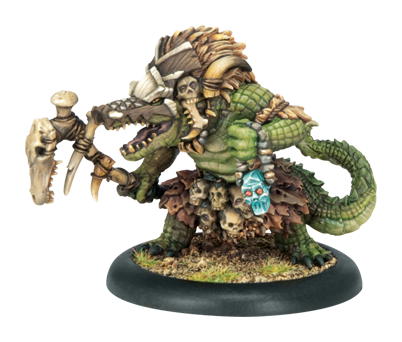 Calaban has, put simply, an absolute toolbox in his spells. Spell assassins are rare in the game, but Calaban is one to respect. He can leverage his spell destruction against all types of foes, and it’s a rare force that he doesn’t have at least some answer against.

It’s always hard to rank a generalist. But I think that’s where Calaban falls. It’s not so much about having some crazy question to ask his foe. Rather, he’s always going to keep a force in a game. And in Warmachine and Hordes, that’s a bigger deal than it seems.

Facing infantry? Calaban clears it. Worried about ranged threat? Occulation protects either him (if assassination focused) or a unit/key model. Enemy debuffs got you down, or enemy Buffs/animi a problem? Hex Blast works both ways. Need MAT fixing with a side helping of remove-from-play? Carnivore does the job. Oh, and facing heavy armor? Best ARM debuff in the game happens to be on his list as well. With additional dice for magic, a Feat that can power him to cycle through all sorts of spells against the right force, and some serious channeling potential, Calaban really puts a lot into play. 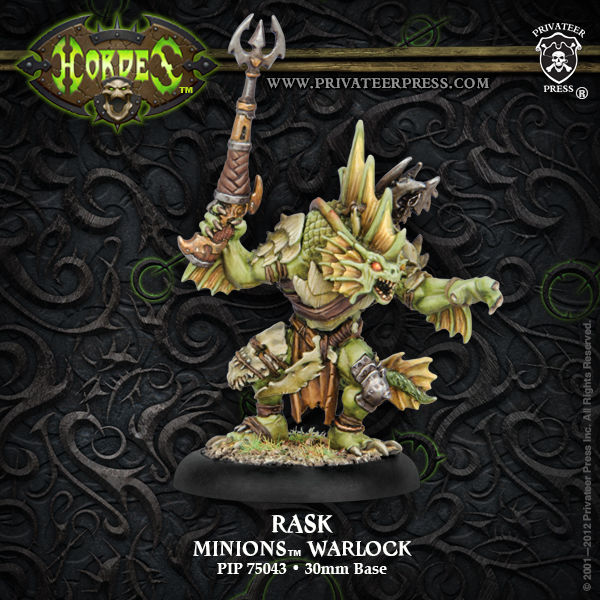 Some of my other choices on this list may be controversial. I don’t think that Rask getting the top spot will be. He’s an absolutely reliable Warlock that can frustrate the plans of almost any aggression-focused opponent.

Defense is key to Rask’s ability. He gets up to the personal survivability of a Madrak2, Borka1, Terminus, or a Butcher in Winter Guard Kommand theme. Call to Sacrifice that works on cheap troops that can be replaced is a grand ability. He’s got Admonition as well, so he can keep himself even safer. And then there’s cheap Cloud effects that he can use to block LOS and a Feat that can keep his force (and himself) quite safe.

So why does a defensive Warlock reach the top of the heap? Because he can leverage some great offense as well. His own ranged weapon can enable all sorts of advantages. Arcane Interference in particular is a nasty ability into Warmachine match-ups. His offensive spells may not be as varied as Calaban’s. But Fury adding a +3 STR swing and Boundless Charge providing threat extension and pathfinder are often enough to make his beast package sing. He can stay alive and keep his force rolling to start to win in attrition and scenario, and that enables his assassination ability all the more. A great Warlock that is rightly a core choice for a pairing every time. 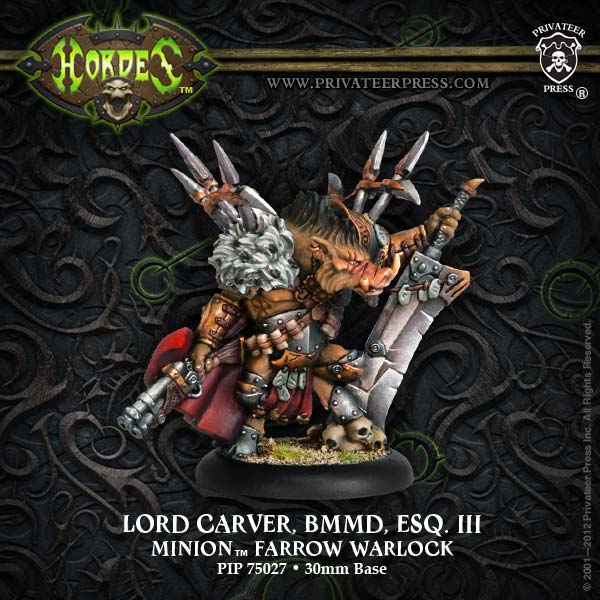 I bet you thought that Jaga-Jaga would be here, didn’t you? I actually think she’s got some play, particularly now as the meta moves to a bit more balance of infantry. The one that I find to be the worst in Faction is Lord Carver himself.

He’s got some serious upsides to be sure. A great Feat, personal threat, MAT-fixing for Farrow warrior models, and a bunch of individually brilliant spells. But it’s that last category that really hurts him. As he has too many critical spells. He has two different spells that each cost 3, and they’re both spells that he would sure love to cast every single round. Mobility is huge for offensive strikes, and Batten Down the Hatches gives real survivability to a faction that is a bit light on ARM.

Yet with a FURY of 6, that means that he’s left empty and in danger any time he’d like to use both. And as a Warlock, that means he’s got to play up pretty far to be able to keep his beasts in control and provide the spell advantage. Which makes him absolutely too easy to assassinate. And that’s what makes him weakest in the faction. You can play him safe and less effective, or risk him dying and go for reward. But unlike some “all in” assassination Warlocks, I’m not sure he gives enough to really get it done if opponents are cagey.