40K: Blightlords And You – A Primer

Blightlords are coming. Slowly. It might take them a minute or two to get there, but when they do, hoo boy.

Blightlord Terminators are an elite group of warriors, garbed in ancient Cataphractii Armor that renders them nigh-invulnerable, and carrying a veritable arsenal of weaponry in their own right, the Blightlord Terminators have the second largest suite of options available to Death Guards unit (second only to Plague Marines), leaving them no end of methods through which to deal out death and disease to their enemies.

Seriously though, they practically swallow the page. 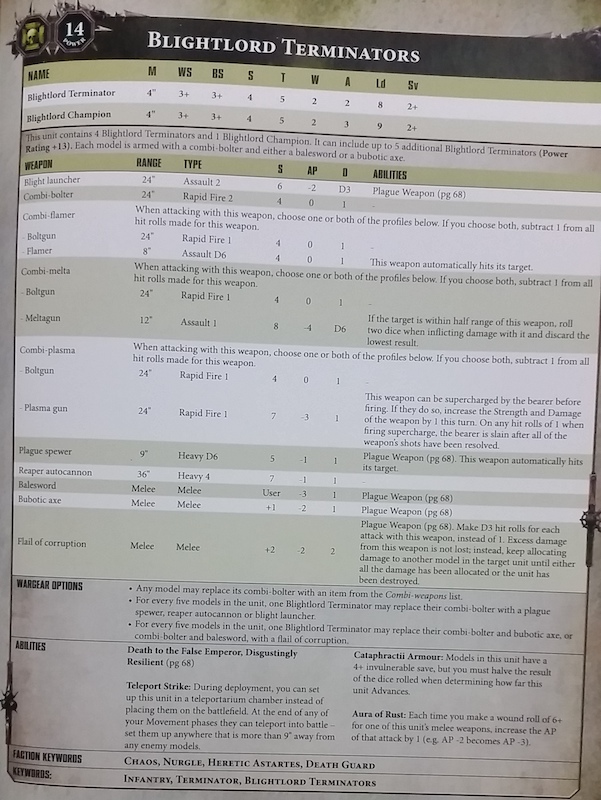 So let’s break these guys down. The Cataphractii Armor means they’ll be able to withstand even the heaviest firepower–it’ll take someone trying to take ’em out. It’ll take serious firepower to overwhelm their saves, and even then, they’ve got two wounds and Disgustingly Resilient, which makes them all the more hardy in the face of Lascannons or Meltaguns.

But then on top of that you get to layer their Inexorable Advance (which only nets you 1-3″ of extra movment, granted) on top of that, which means that if you can get these big blight buddies within 18″ of a target, they can rapidfire twice. So that’s 20 shots minimum on the normal, off-the-rack Blightlords. Or if you really want to be mean, give them Combi-plasma weapons and unload 10 plasma shots and 10 bolter shots on your target–that’s firepower comparable to a  squad of Hellblasters.

And that’s not even discounting the fact that you can load them down with heavy plague weapons, like a 9″ flamer (that is also a plague weapon) or the Reaper Autocannon.

They get really spicy though, if you can get them into combat. With their Baleswords or Bubotic axes you can pierce armor like nobody’s business. And the fact that their plague weapons means you’ll reroll 1’s. And if a Balesword gets a 6 (which means it wounds) it penetrates at meltagun levels. The Flail of Corruption though, is the all-star. So far this is the only weapon in the game that lets you mimic mortal wounds. Sure they’ll get a save against it–but any damage that actually bleeds through continues hitting the unit until it’s done. Stick it on your Blightlord Champion for 3d3 attacks in combat. 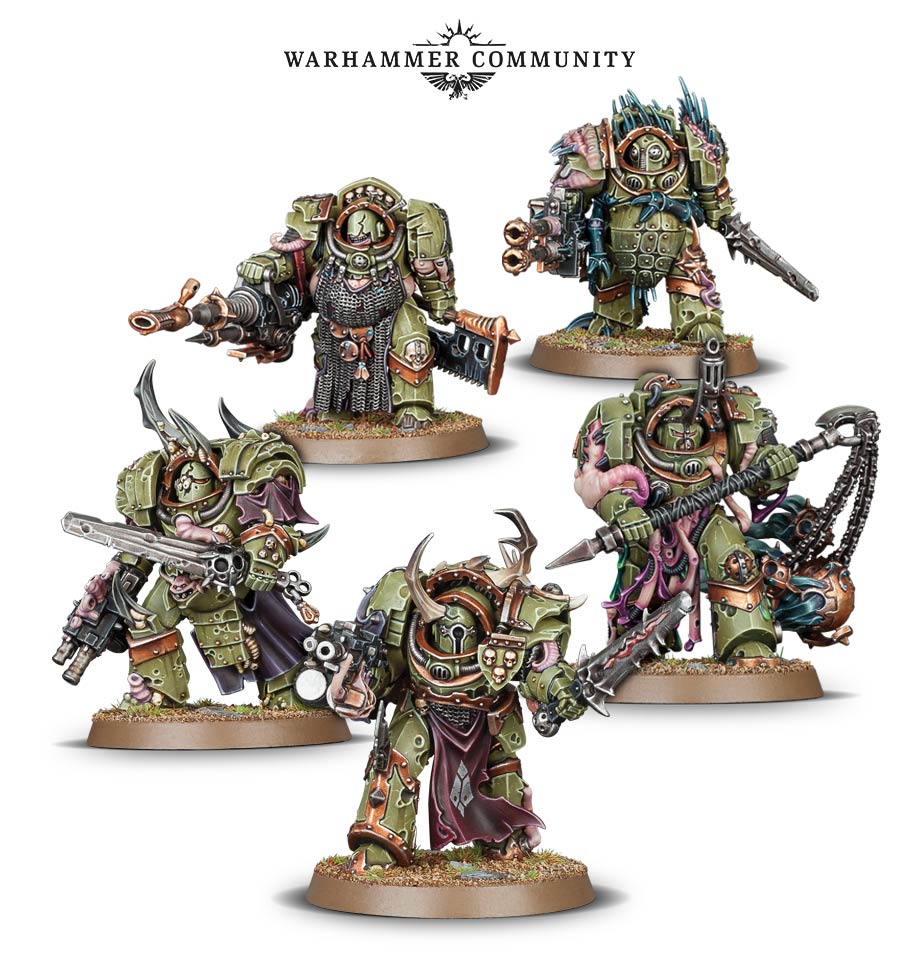 One of their big problems, though, is their cost. Blightlords are 14 power level for a unit of 5, or 38 points per model plus wargear. Add to that the fact that you’ll need some kind of assistance to get them where they’ll going (otherwise they’ll spend the battle chasing after them), and you’ll really have to be careful with them. But if you can get within 22″ of a unit at the start of your move phase, you can lay out a withering hail of fire.

Plus these models are just gorgeous. You get a variety of sculpts–there’s a terminator bursting out of his armor, or another who is transforming into an insectoid creature. They’ve got a ton of character, even their weapons are all blighted and corrupted.

So that’s a brief rundown of Blightlords for you.

How would these guys fit in your army?