Nurgle’s Rot is creeping ever closer and Games Workshop is back with a new round of teasers for the Death Guard Codex!

We got a look at a few of the Stratagems, Warlord Traits, and Relics of the Death Guard earlier this week. Now, Games Workshop has a new batch of gifts from Nurgle. Check these out – but you might want to wash your hands afterwards…

Inexorable Advance is basically their Chapter Tactic/Legion Trait from the Marine or CSM Codex. For the Death Guard’s Infantry and Helbrute units, it’s going to be a powerful boon to their shooting. Moving and firing Heavy weapons doesn’t incur a penalty and neither does Advancing and firing Assault weapons! But that’s not all – Rapid fire weapons can double tap at up to 18″ vs their normal “half the weapon’s maximum range.” YIKES! 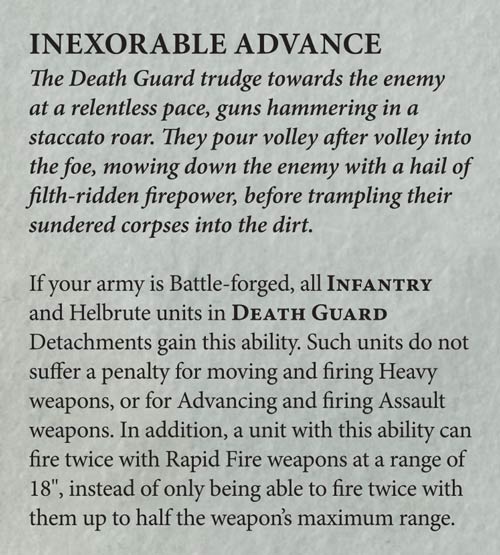 Death Guard units are going to me able to move and shoot with the same deadly accuracy at range as if they were standing still. That should help them get in close to trigger all those 7″ Mortal Wound Aura Abilities we took note of…

Speaking of Mortal Wounds, wouldn’t it be nice if there were a way to save those? Well guess what – pretty much the entire army is going to have Disgustingly Resilient as well: 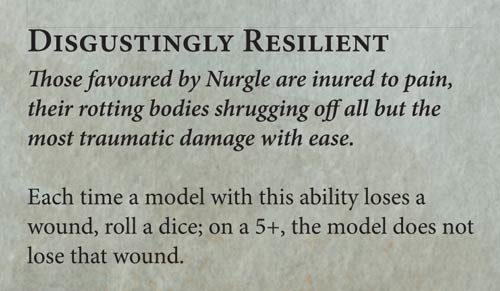 “While it’s not an army special rule as such, it’s worth noting that nearly every new Death Guard unit has Disgustingly Resilient. This includes all the new Daemon Engines serving alongside the Death Guard, as well as both their unique Terminator units (rest assured we’ll be taking a closer look at these soon!). Disgustingly Resilient is an incredibly useful ability, helping your units cope with high AP weapons and even Mortal Wounds that can be deadly for heavily armoured infantry. Older units like Possessed and Helbrutes lack Disgustingly Resilient but will benefit from your Stratagems significantly, meaning they still very much have a role to play in your army.”

Well there is a hint that the Death Guard Stratagems are also going to help keep stuff alive – truly Grandfather Nurgle’s Gifts are open to all! But Helbrutes and Possessed aren’t the only “old” units that will be in the Codex. Here’s a quick list from GW:

The Death Guard will be keeping access to everything they could use in Index: Chaos – so Chaos Lords, Sorcerers, Chaos Cultists, Helbrutes, Possessed, Chaos Spawn, Chaos Land Raiders, Defilers, Chaos Predators and Chaos Rhinos. In addition, there are 9 completely new units in the codex, datasheets for the 4 new units from Dark Imperium, and an updated datasheet for Plague Marines that gives them some powerful new options

The four new units from Dark Imperium and the Plague Marines will also be included but the big news was that there will also be 9 COMPLETELY NEW units in the codex. Anyone want to take a stab at those? I’ll start the list off: 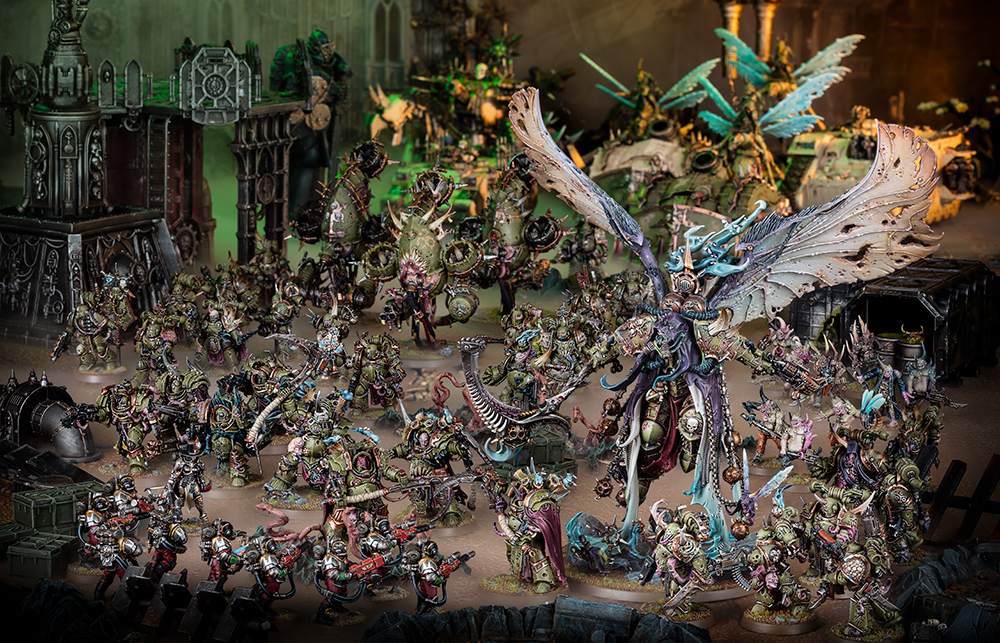 Oh and that doesn’t include the Nurgle Daemons like Nurglings. GW also confirmed “the codex also contains rules for a range of Nurgle Daemons” – that sounds like those Daemons are in addition to the 9 new units. Now which Nurlge Daemons besides the Nurglings? Based on the CSM book – probably at least Plaguebearers and Plague Drones. But who knows what else might be in the book…

We’ve already seen a few of these floating around, but here are two more powers that you can count on in your arsenal of Nurgle:

Blades of Putrefaction – First off, you get to add 1 to all Wound Rolls made by a friendly unit in the fight phase. Causing more wounds is always good, right? On top of that each roll of a  7+ inflicts a MORTAL WOUND in addition to any other damage! Yeah – you read that right, suddenly dice rolls of a 6 are causing Mortal Wounds plus regular damage. Note: You can save vs the regular attack, but the Mortal Wounds are still applied because it’s “in addition to any other damage.” OUCH. 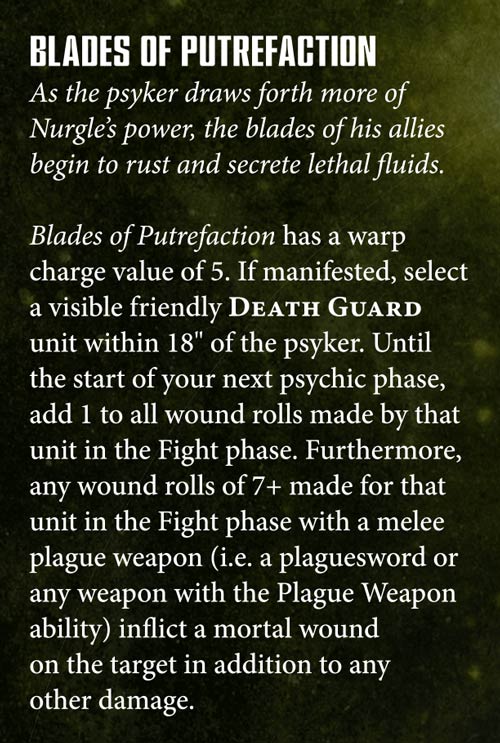 Putrescent Vitality – Hey, would you like to be harder to hurt AND hit harder as well? Well Nurgle has a “Gift” for you! Putrescent Vitality will at +1 Strength and Toughness to a friendly Death Guard Infantry unit with 18″ – sounds like a winner to me! 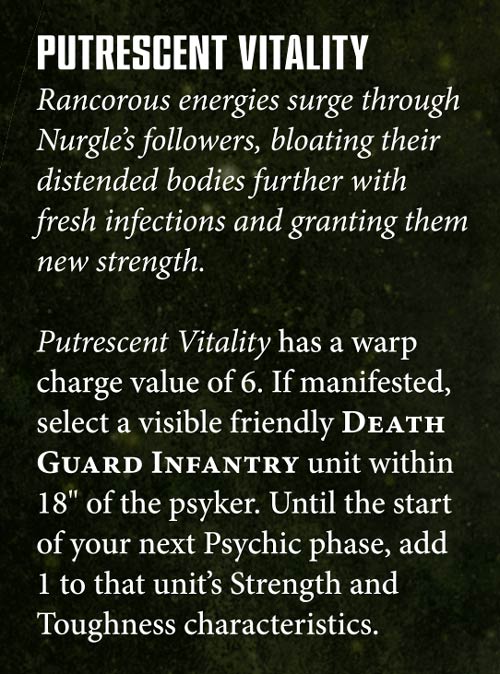 Get ready folks, the Death Guard are looking pretty darn mean! The book is slated to go up for Pre-Order this weekend.

I hope you bought some hand sanitizer.

Author: Adam Harrison
Writer, Editor, Texas Native, and Austinite for 15+ years, Adam covers all things Tabletop Gaming. Which includes Warhammer 40,000, Age of Sigmar, D&D, Board Games and everything else that involves dice, boards, cards and a table. A hobbyist, player, and collector of miniatures and games, Adam's current obsession are his Death Armies for Age of Sigmar, his Blood Angels and Tyranids for 40k, and his ever growing Arkham Horror: The Card Game Collection.
Advertisement
Chaos Marines Death Guard Games Workshop Rules Tabletop News Warhammer 40k
Advertisement