The Death Guard look like they have a ton of ways to generate Mortal Wounds besides Smite-Spam – check it out!

We’ve only got a teaser of what the Death Guard are going to be able to do so far and we’ve got news of more things to come. Now, we’ve gotten in lots of games with the “Index” Death Guard Chaos army on our Twitch Stream so we’re pretty comfortable with the army rules. We’ve also been going over all the Death Guard info with a fine-tooth comb and have started to notice a trend – a trend Games Workshop even called out:

“In the game, the Death Guard march inexorably towards the enemy, weathering incoming fire with Disgustingly Resilient and slowly wearing down the foe with hails of fire, an accumulation of mortal wounds and deadly plague magics.”

The emphasis is ours – “an accumulation of mortal wounds” is a definite theme of the Death Guard and to prove that point, we’ve collected the examples we could find:

Plague Wind –  One of the 3 “Index” Psychic Powers. I’ve been on the receiving end of this one with my Gaunt Squads more than once. It’s pretty nasty on big units and sometimes just as effective as tossing a Smite on a 10-man unit.

Nurgle’s Gift – Typhus has it. The Lord of Contagion has it. What do you suppose the odds are that Mortarion will ALSO have it? What about the other characters in Codex: Death Guard? And just in case you think you can avoid it, just remember that even Poxwalkers are keyword Death Guard units. It’s not terribly difficult to string out a few units along the battlefield and stay within a 7″ radius of a character to “help pass along” this gift.

Pestilential Fallout – Mortarion might not like Psykers, but that doesn’t mean his boys don’t know how to use their deadly powers. The Malignant Plaguecaster can trigger Mortal Wounds on units just by successfully casting powers when he rolls a 7 or more. And he can attempt TWO per turn. And he’s just ONE caster. What do you suppose the odds are that this shows up on other Death Guard Psykers? (But would they even need it?)

Death Guard Warlord Trait: Living Plague – Just get your Warlord within 3″ of enemy units and start to rack-up the Mortal Wounds. A 50/50 shot to get free damage? Yes please! 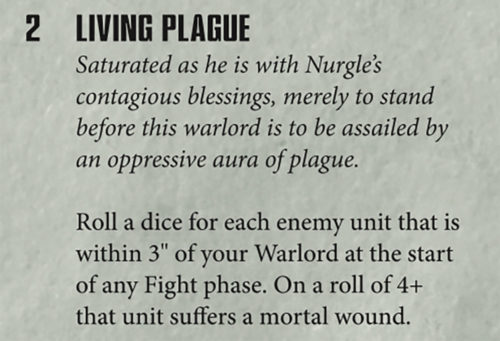 Death Guard Relic: Dolorous Knell – Sure it can only be used by a Noxious Blightbringer, but that just means it’s one more option for (and one more way to get) Mortal Wounds. It’s a 7″ Aura that triggers in the Morale Phase. That could be a double-whammy of causing a unit to lose yet another wound and take a morale check with a penalty. 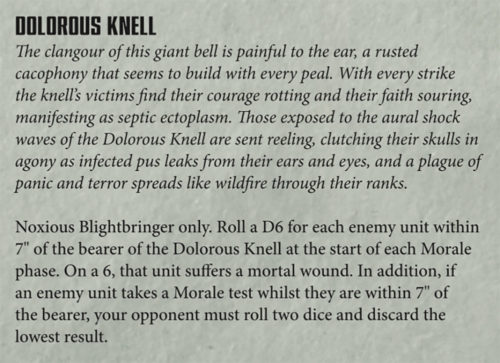 Death Guard Relic: The Suppurating Plate – Okay, this Relic is probably going to show up more than Dolorous Knell and for good reason! It’s easy to see just by looking at the ability that you want to take the character equipped with this relic and march them directly into the enemy’s line. “Go Ahead, swing at mean with your 0 AP close combat attacks. I DARE you.”  With the right Warlord trait (looking at you Revoltingly Resilient) there is a good chance that a Toughness 6 character (like a Daemon Prince) can walk away unscathed while the “attacker” takes more damage than it caused! And it’s ALL Mortal Wounds. 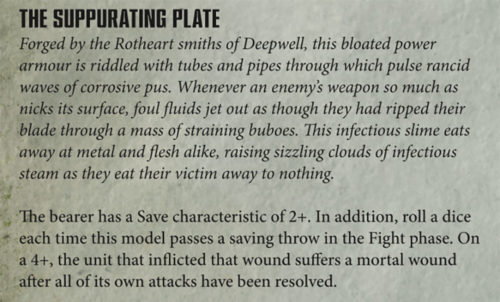 Death Guard Stratagem: Putrid Detonation – “Wait a minute, this doesn’t say anything about Mortal Wounds!” No – it says it causes Death Guard Vehicles to automatically explode. And do you know what that causes? Mortal Wounds. Will all the new toys Death Guard are getting, there are bound to be some vehicles that bite the bullet…why not have some payback with it!

Death Guard Stratagem: Nurgle’s Rot – This one is PRICEY at 3CP. But if your Death Guard Character is knee deep in the (so to be) dead already, why not pop this stratagem and stack the odds in your favor? It’s yet ANOTHER 7″ aura that causes Mortal Wounds, D3 at that! 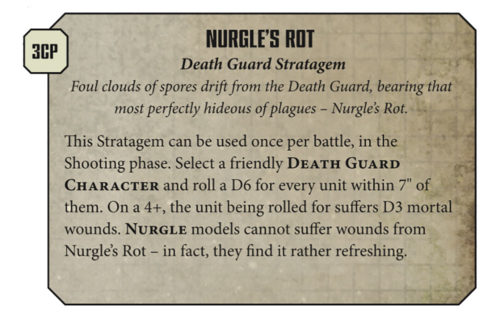 So are you ready to deal with Mortal Wounds? I sure hope you bring some extra bodies to the fight cause you’re going to need them – nothing is safe from Death (Guard).

Author: Adam Harrison
Writer, Editor, Texas Native, and Austinite for 15+ years, Adam covers all things Tabletop Gaming. Which includes Warhammer 40,000, Age of Sigmar, D&D, Board Games and everything else that involves dice, boards, cards and a table. A hobbyist, player, and collector of miniatures and games, Adam's current obsession are his Death Armies for Age of Sigmar, his Blood Angels and Tyranids for 40k, and his ever growing Arkham Horror: The Card Game Collection.
Advertisement
Chaos Marines Death Guard Games Workshop Rules Tabletop News Warhammer 40k
Advertisement