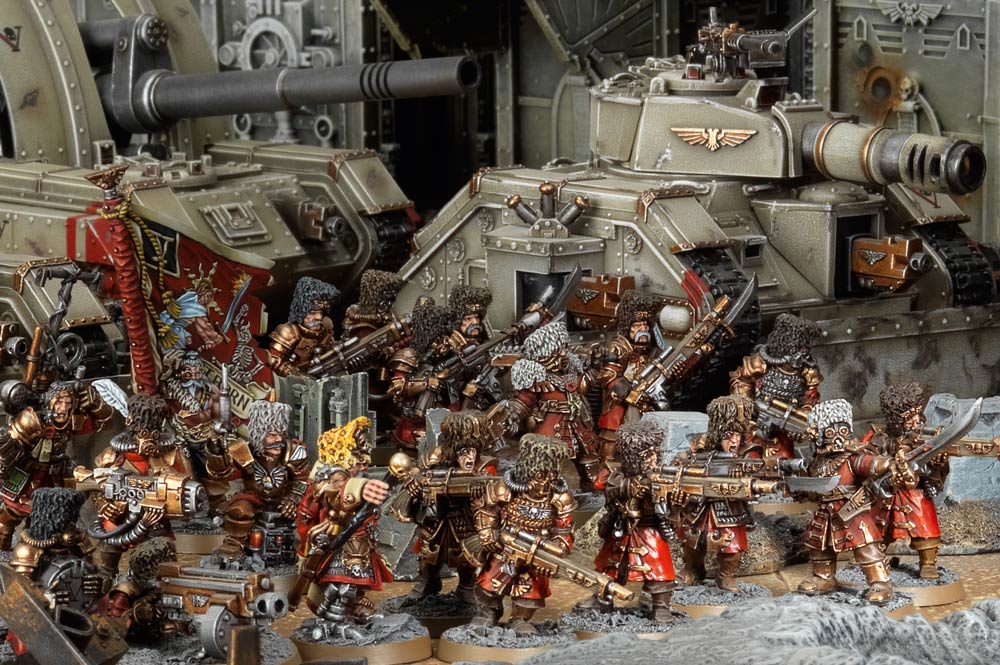 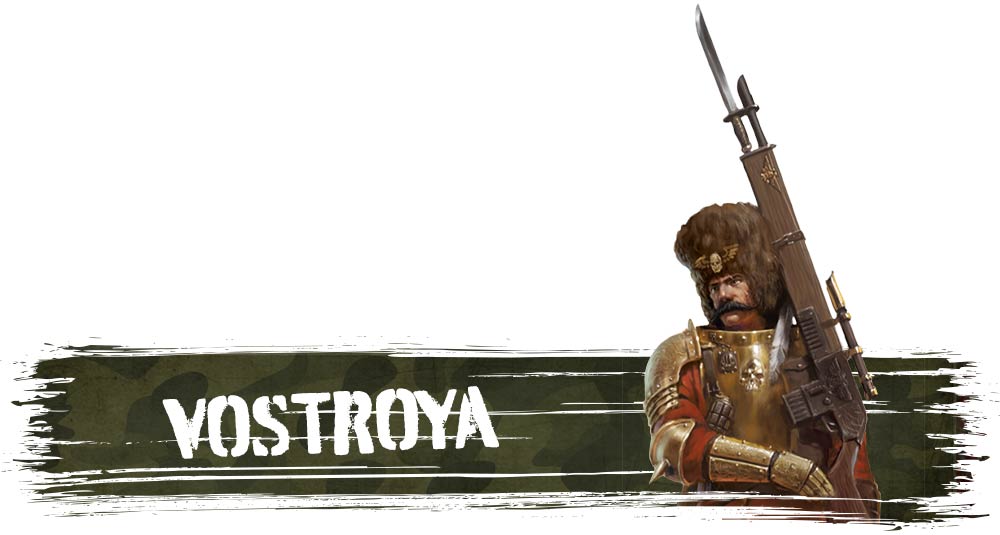 The Vostroyans are coming to play in the next Astra Militarum Codex and they are bringing their family heirlooms with them!

The planet of Vostroya is a world famous for the Offering of their First Born – a promise that each family will send their first born son to enlist in the Astra Militarum. This was due to the guilt the planet felt after refusing to send regiments to the Emperor during the Heresy. They preferred to stick to manufacturing and crank out the tools of destruction. It may have also had to do with the fact that they had sworn allegiance to Mars during the Age of Strife. Regardless, the Regiments of Vostroya are comprised of the first born males of every family. And the Vostroyans do their best to take care of their sons…

Vostroyan armies are well known for their ornate appearance, both in the background and on the tabletop! Armed with ornate weapons and wargear that hearken back to ancient eras of warfare, the Vostroyans are obsessed with duty and lineage. Indeed, every Vostroyan goes to war armed with priceless heirlooms, built and maintained to a much higher standard than that of the rest of the Astra Militarum.

The Vostroyan’s Regimental Doctrine Heirloom Weapons does a good job of translating their technical expertise and manufacturing to an advantage on the tabletop: 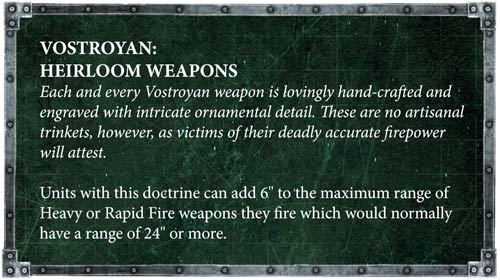 That’s right folks – all their Lasguns are 30″ range. That means they can sit back just out of most other armies and fire down range. That extra 6″ could buy you a valuable turn of fire before the enemy makes it to your lines and it could be the difference between victory and defeat. But let’s think outside the box just a bit. That also applies to Heavy Weapons as well. And we also know that Doctrines will impact Leman Russ tanks as well as other vehicles in the Astra Militarum’s arsenal. You know what’s 24″ and lays down a stream of lead like no other? 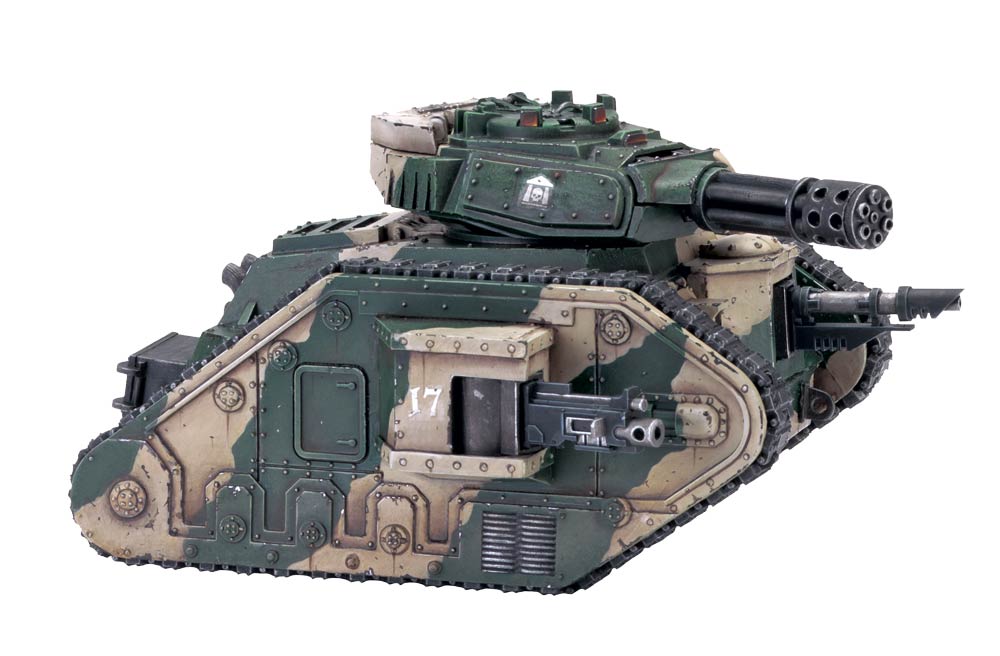 Oh and don’t forget what we learned yesterday about how the Leman Russ can fire twice. Just tossing that out there. The doctrine also applies to their OTHER weapons as well. 42″ heavy bolters, 54″ Lascannons…Oh and how about their plasma guns. Doesn’t that also bump up their Rapid Fire “double tap” range to 15″ as well? Moving on…

With that extra range, the enemy is going to want to close fast – who can blame them! For the Vostroyans, it’s going to be a matter of maximizing that long range as we mentioned before. But that doesn’t mean they don’t have some dirty tricks even when the enemy gets close. Check out their unique order: Repel the Enemy!

So basically the Vostroyans can fire into close-combat with all their weapons, not just pistols! That means they are going to (hopefully for them) get an extra round of shooting at long range and when you do actually make it to them in close combat, they are going to get ANOTHER round of shooting into your unit. And that’s not even counting the rounds in the middle! What if they (wisely) move back on their turn as well and get those extra shots off. Smart AM players are going to be able to really take advantage of that extra range and then seal the deal in “close-combat” territory.

Games Workshop has also decided to show off some of the special rules for Scout Vehicles. These aren’t specific to the Vostroyans but you can see how they can take advantage of them. First up we have the Scout Vehicle rule:

Sentinel Walkers are going to be able to get pretty much anywhere they need to go. If they are running around with an Autocannon or Lascannon (or really any weapon in their wargear options) they are going to be able to reach out and touch the enemy. You could use this move in sorts of fun ways. Maybe it’s a bait unit to get your opponent to deploy near them on to have them run off. Or maybe they are tank hunters that are going to run up the sides and get long shots at enemy armor. You’ve got options! And if for some reason they are grossly out of position, you can always spend a Command Point and use the Go! Recon! stratagem: 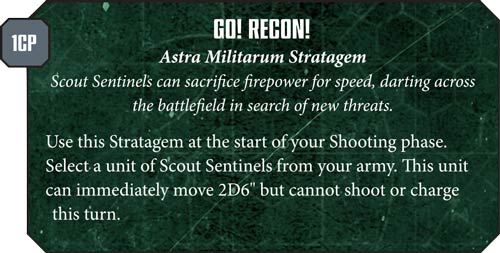 I can see this used in some very sneak ways. You will sacrifice your shooting/charging but you could also use it to buy yourself a turn by absorbing a charge or denying area for the enemy to “deepstrike” in. I think it’s more about the board control than anything else with this one. Then again, you can also use it to get the jump on the enemy and setup a threat for next turn…

With the Vostroyans confirmed that means we’ll likely be seeing more about them in the book. Unique Warlord Traits, Relics, and Stratagems are all high probability inclusions for them as well. Now the question will be where will you get those models…

What do you think of the Vostroyans? Are their Heirloom weapons going to make an impact or are you not concerned about that extra distance they are get with their Rapid Fire and Heavy weapons?

40K: The Next Imperial Primarch 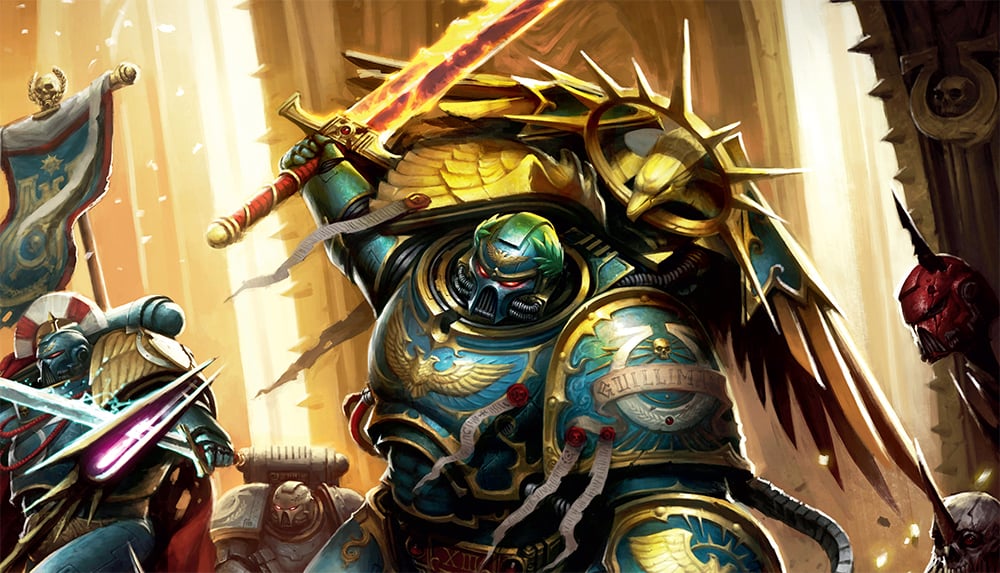