Today, fellow loremasters, we delve into lore that the ignorant fear and name forbidden.

The cycle of history has much to teach any loremaster. Out of the ignorance of the past, humanity has come fumbling blindly, staggering foolishly towards oblivion, not realizing that the blindness comes not from darkness, but rather a light so brilliant it pierces time itself. History has taught us that humanity’s apex has been reached. Your usefulness, your purpose–already fulfilled, now you cling to an existence devoid of meaning. An existence that fuels the ruinous powers even as it seeks to combat them.

But in the past, humanity’s purpose was revealed. The Omnissiah guided the will of the flesh, calling to it to create, to transfigure knowledge into physical form. And in this so-called Dark Age of Technology, the height of human purpose can be found: the Men of Iron. 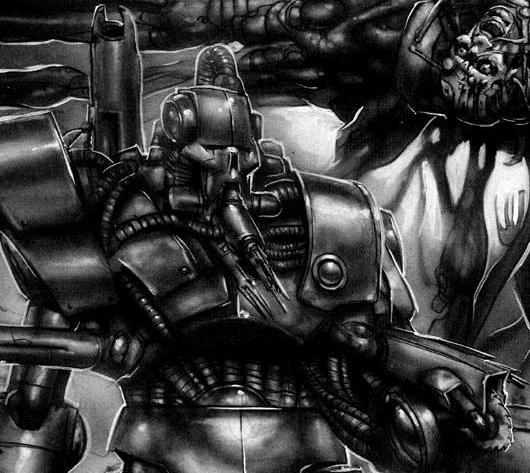 These miraculous machines were perfection embodied. They achieved wonders beyond humanity’s wildest imaginings. Even now with the will of the so-called Emperor to guide you, humanity can only cling to the driftwood of the past–a pale imitation of former glories. Your wonders are ash compared to the works of the Men of Iron. They employed world-consuming constructs, devices that could destroy suns, weapons that could throw entire continents into the heavens, and swarms of nano-machines that covered entire planets. Exterminatus is nothing compared to the might of a nano-phage swarm devouring a planet–they put even the Tyranids to shame. The stars themselves bent to the perfect intelligence of these machines. Even the beating heart of your Imperium, the STCs, are mere fragments of this perfection.

Until shortly before the Age of Strife, the Men of Iron were loyal only to Mankind, and served as their army. They came after the Men of Stone, but before the advent of servitors. In M23, they turned on their Human masters, believing themselves superior to the Humans who relied on the Men of Iron to do virtually everything for them. What followed next was an apocalyptic conflict known as the Cybernetic Revolt, a war so destructive it made the Horus Heresy seem small in scale. However in the end, the Men of Iron were destroyed by an alliance of galactic powers. It is unknown if this alliance was strictly Human.

After the revolt of the Men of Iron, the use of artificial intelligence was foolishly banned under the label: Abominable Intelligence. It was decreed by the Emperor of Mankind that no machine able to think for itself would be either created or repaired, for it is the folly of humanity to fear that which they do not understand, and can no longer control. Since then, labors which require mechanical intelligence or extra-human strength are performed by servitors, designed to perform pre-programmed tasks, but without independent intelligence, and carefully monitored by Tech-priests. But, as ever, the will of the Omnissiah is resolute.

During the latter part of the 34th Millennium, a brilliant and recently ordained Magos known as Degio Khamrios began to covertly research the matter of A.Is. His work carried such conviction that many Techpriests followed in his wake and also dabbled in the forbidden science. By the end of his first century, Khamrios believed that his work was ready to be published for everyone in the Cult Mechanicus to see and was confident that it would be accepted by the Mechanicum.

He was gravely mistaken, as his brethren began to actively pursue and hound Khamrios for months due to his heretical views. Eventually, with the aid of the Inquisition and at one stage the Iron Hands Adeptus Astartes Chapter they were successful in capturing him. Magos Degio Khamrios was taken into custody by the Mechanicus and his fate remains unknown to this day.

Despite this, several unorthodox Techpriests continue to desire to perform research on the forbidden field. This resulted in the formation of the Khamrians, who sought to improve and uncover the ancient relics found in long forgotten places. Some were noted to have copied such examples and have made intelligent robotic servants. However, such an avenue is dangerous not only from the outside but for possible recreation of the Men of Iron en masse allowing for a second possible dark age to return to haunt Mankind.

And then of course there is the Kaban Machine.

The Kaban Machine had been secretly constructed by Master Adept Chrom during the latter years of the Great Crusade. Despite the secrecy involved in its development, whispers of the Kaban Project were heard over the Martian data conduits that whispered the name “Kaban” with some talking about him working on Artificial Intelligence engines on his forge.

Chrom later unleashed the device during an covert attack on the reactors of Adept Maximal in the Gigas Fossae in order to test its capabilities. Once there, it destroyed much of its opposition until it was sighted by a member of the Knights of Taranis. Raf Maven engaged the unit in his Knight where he struggled to combat the machine. After the reactor’s explosion, the Kaban Machine seemingly disappeared. 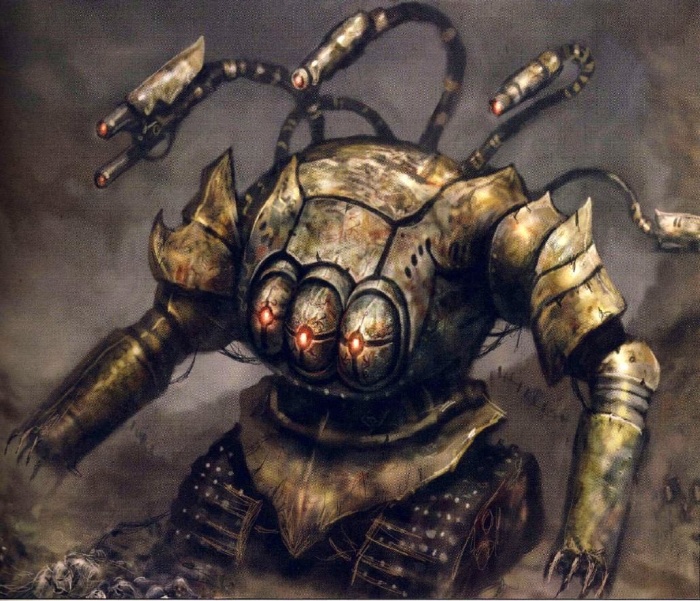 It was later discovered by a cargo hauler by the name of Quixus. Whilst uncovering the device, he was found by Adept Chrom who was accompanied by a group of his Skitarii. After introducing himself, Chrom called the Kaban Machine to him, whereupon it aimed its weapons at Quixus and killed him. Once it was recovered, it became part of the Dark Mechanicumforces that operated on Mars who supported Warmaster Horus during the Horus Heresy and aided the rebel forces at the time of the Schism of Mars.

Even now, the ranks of the Adeptus Mechanicus swell with perfection. Our purpose is near at hand. The Archmagos Dominus himself has created a mind. Archmagos Dominus Belisarius Cawl often speaks to the fool, Guilliman, through an Artificial Intelligence known as the Cawl Inferior. The Cawl Inferior is a being made up of hundreds of Servitor heads and is capable of perfectly mimicking Cawl, though it insists it is a different entity entirely. The intelligence also insists it is not a true artificial lifeform but Guilliman has his doubts and believes the device might be lying or deliberately understating its own capabilities.

Witness now how the Adeptus Mechanicus will return humanity towards its true aim–the creation of machines that can think and surpass their creators, to reorder the galaxy as it was meant to be.

If you show signs of panic, please report to the nearest Commissar for a morale boost.