Move over Imperial Assassins (and Elon Musk) – there is a new Hero of Hive World Woundus Shenaniganus: The Ogyrn Bodyguard!

What’s big, tough, dumb, and (most importantly) loyal? The humble Imperial Ogyrn of course! Love’em or Hate’em Ogyrns haven’t had a lot of time to shine in the last couple editions…but all that is changing with the arrival of the Ogryn Bodyguard! Let’s take a look at what this behemoth of beef can do: 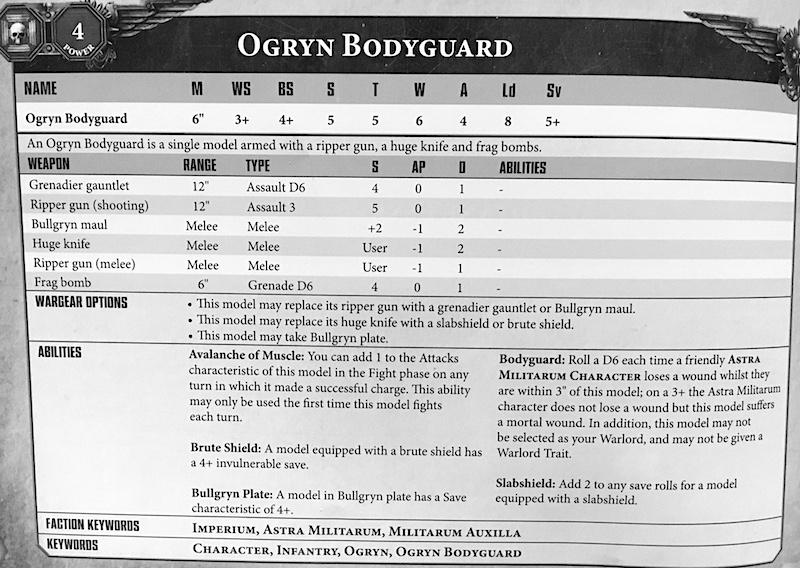 For 55 points (plus wargear) you get a pretty tough Character with 6 wounds to chew through. The Ogryn is a decent shot at closer range and a solid melee combatant as well. Depending on how you load this wall-o-beef out, the Ogryn probably won’t be going anywhere without some dedicated fire/assaulting action. But what really makes this guy tick is the Bodyguard ability:

I’ve made my case why I dislike this rule’s design before. Mechanically, I get it. But thematically, I don’t like how this model can “absorb” a lost wound from another model. That model some how regrows the lost wound and the poor bodyguard just magically takes a mortal wound. It never takes the attack, just feels the damage. But that’s not the point of this one – Oh no, the problem is really how this rule is worded. 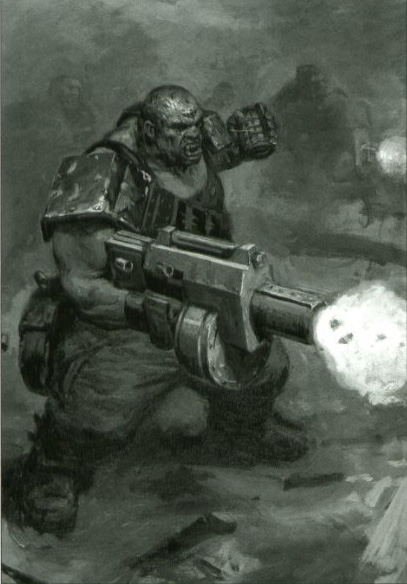 The issue comes from the keyword Astra Militarum Character in the ability. You know who is ALSO an Astra Militarum Character? The Ogryn Bodyguard. Now, being a Character has it’s own unique advantages and …well advantages. We’ve talked about them before and offered a suggestion to tweak them. The Ogryn Bodyguard is poised to take advantage of a whole new class of Wound Shenanigans thanks to the ability to shuffle wounds around the table.

Let’s say you have Knight Commander Pask in a Leman Russ – because, hey, it’s cool and thematic and good. And behind him you have, oh I don’t know, 4 Ogryn Bodyguards. And let’s say they are all strung out in such a way they are each within 3″ of each other and/or Knight Commander Pask. Let’s say that Pask gets shot with a Lascannon and is wounded and takes 4 Wounds thanks to a good damage roll. Ouch! But never fear – the Bodyguards are here: 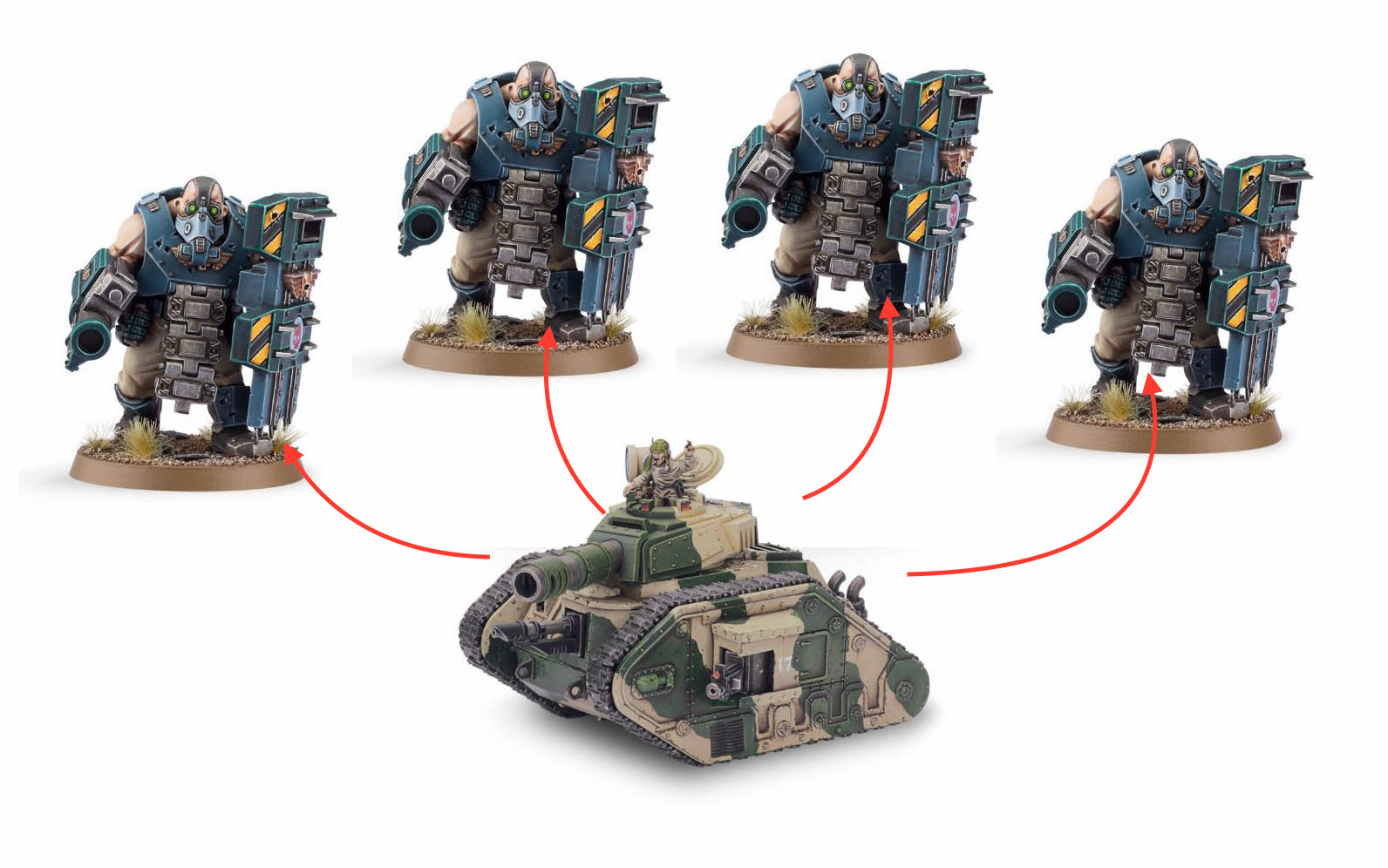 The Bodyguards can simply absorb one shot each – which is working as intended, right? Except they are each characters. And what if you failed one of those 3+ rolls? That’s okay – you could just have one of the other Ogryns attempt to take a wound and then have one of the OTHER Ogryns absorb that wound as well… 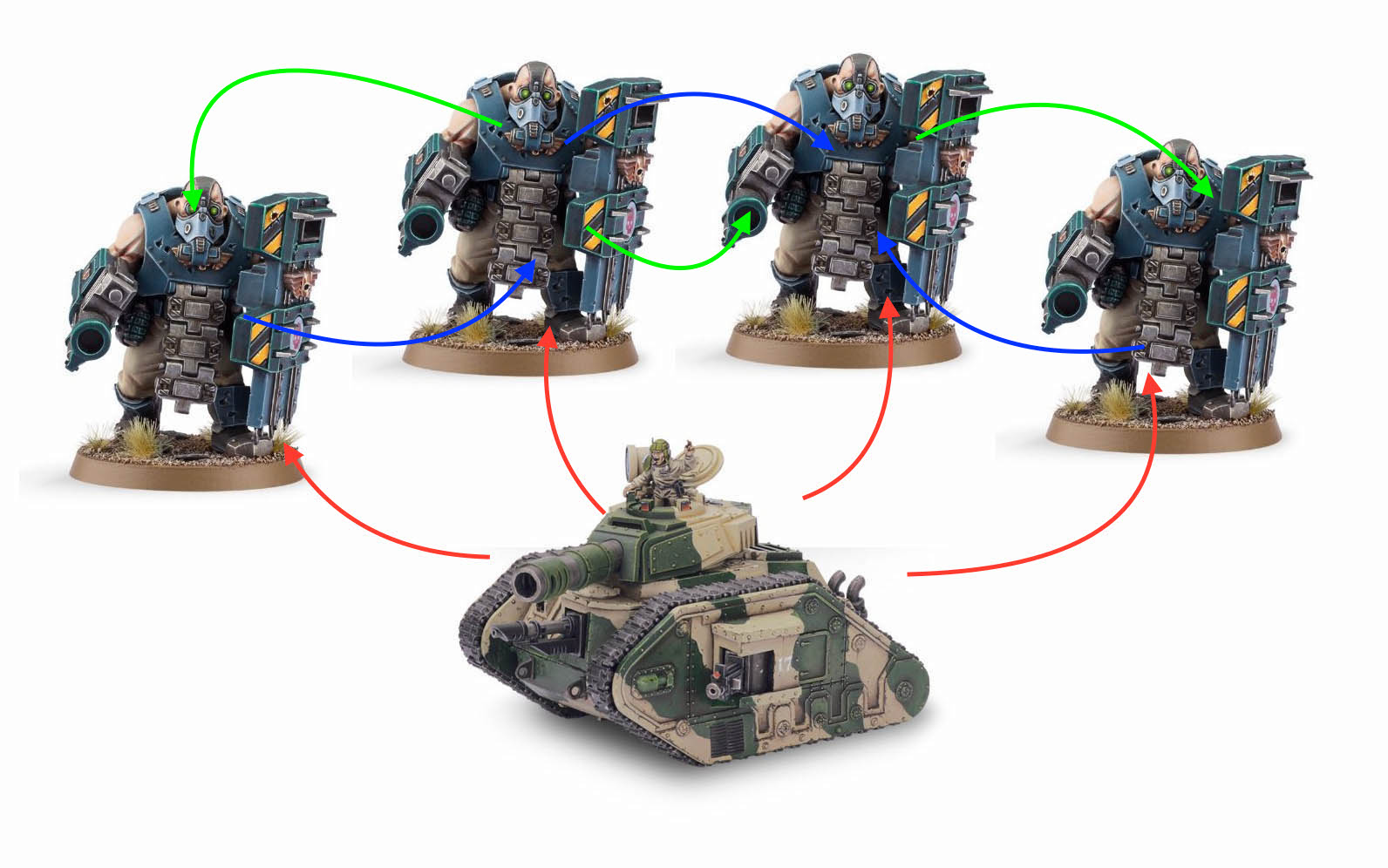 This is all totally viable and working as intended, right? An Ogryn Bodyguard should be able to take a wound intended for one target. But should that damage be allowed to pass on to another Ogryn down the line? RAW – yep! 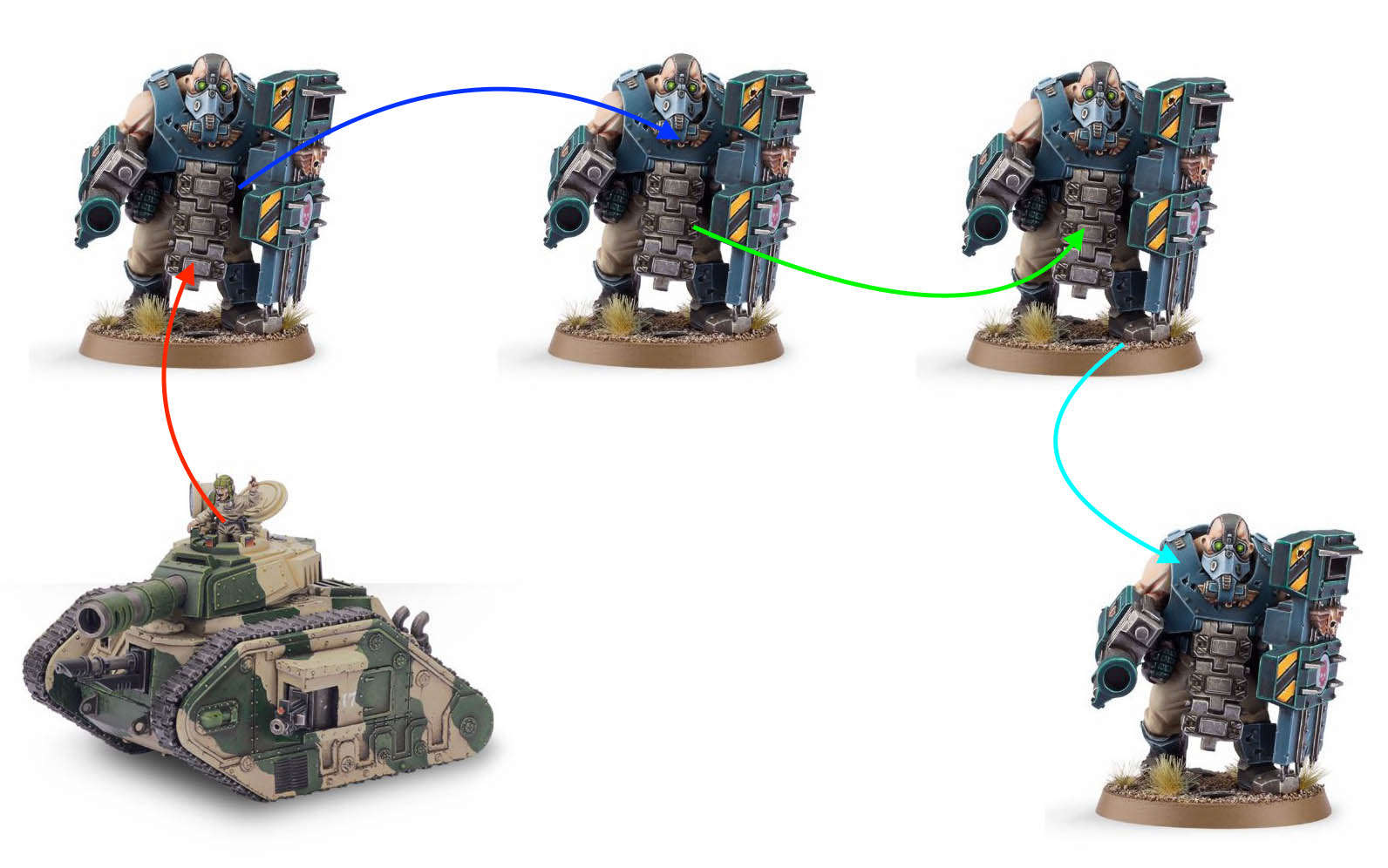 Now, this all relies on your ability to roll a 3+ which for some folks is genuinely a problem. At the same time, if you have all 4 Ogryns within 3″ of Pask, you’ve got 4 chances to roll that 3+, and then more changes to shuffle that wound where you want it. And, because this is all based on the target player getting to determine when this chain of mortal wounds stops you could keep attempting to shuffle wound around all day long. 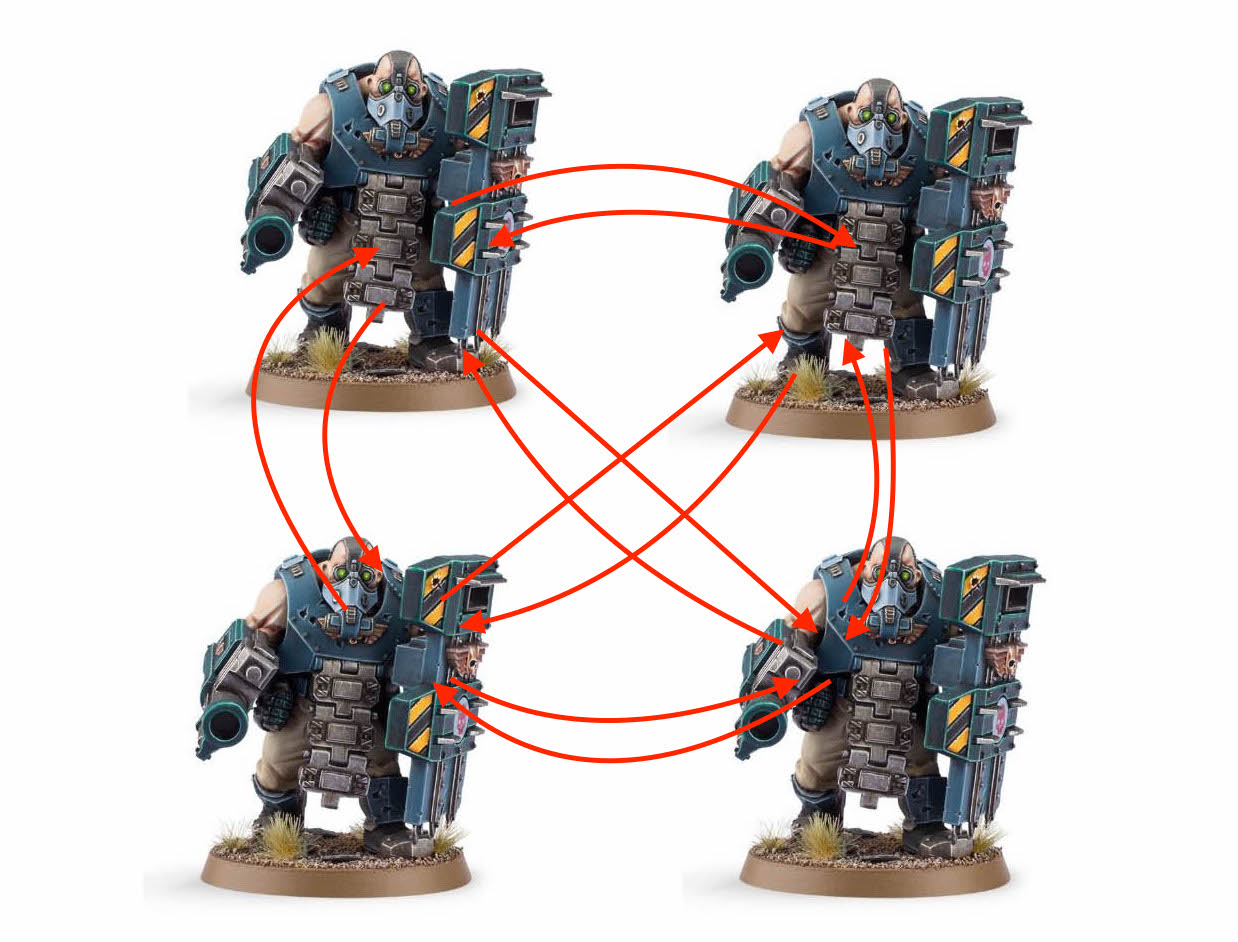 The “best” part is that each one of these guys are Characters so your opponent can’t even target the one that’s wounded to finish the job. And if they COULD, hey, just go all hyper loop on them and pass that wound around until you get bored or fail all your 3+ attempts.

At best players can use this to shuffle wounds around to a more advantageous model. At worst, this is a stall tactic that more unscrupulous players will use to run down a game clock during a tournament. Please don’t try this at home.

We gave the Ogryns the technology. This is what they did with it…

Author: Adam Harrison
Writer, Editor, Texas Native, and Austinite for 15+ years, Adam covers all things Tabletop Gaming. Which includes Warhammer 40,000, Age of Sigmar, D&D, Board Games and everything else that involves dice, boards, cards and a table. A hobbyist, player, and collector of miniatures and games, Adam's current obsession are his Death Armies for Age of Sigmar, his Blood Angels and Tyranids for 40k, and his ever growing Arkham Horror: The Card Game Collection.
Advertisement
Astra Militarum Games Workshop Miniatures Rules Warhammer 40k
Advertisement