D&D: Xanathar’s Guide Wizards and Clerics and Grungs Oh My 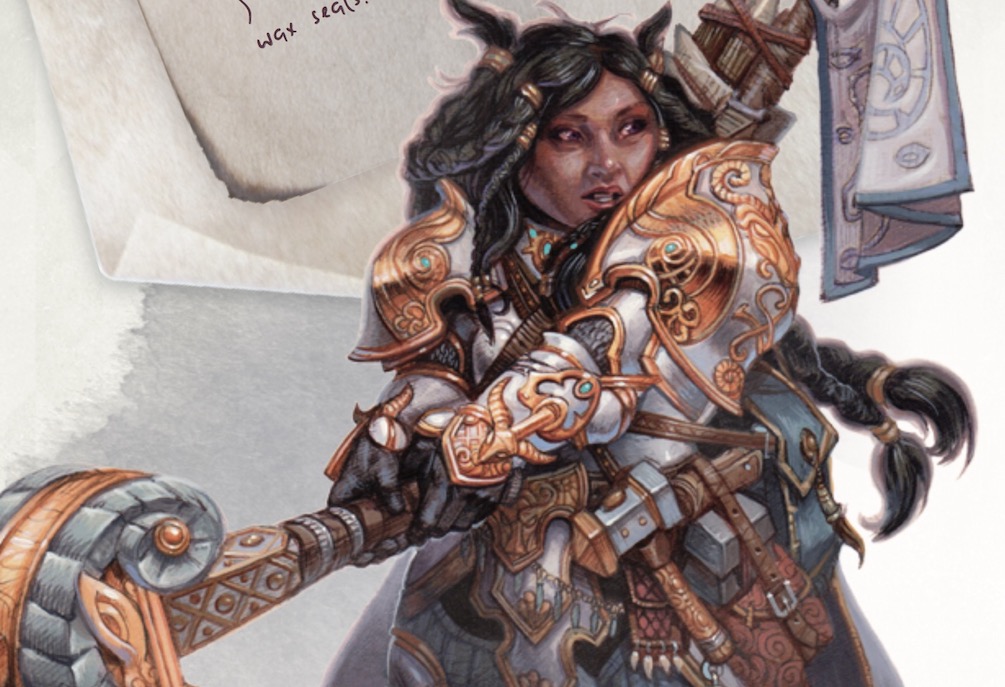 Check out a full preview of the Forge Domain Cleric, plus learn about the new Wizard subclass and bonus Grungs!

Just when I thought I was about as excited as I could get for Xanathar’s Guide to Everything–today we have a preview of the new Wizard subclass, a first look at the final version of the Forge Domain Cleric (so you can see what a fully realized subclass will be like–also some gorgeous art), and as a bonus, you can add Grung Rules to your game for charity, and in so doing, unlock even more Xanathar’s Guide spoilers. There’s a lot to unpack here, so let’s just dive right in to the Wizard.

As you’ll recall Wizards are only getting one Subclass in Xanathar’s Guide to Everything. To be fair, they already have 9 subclasses–one for each individual school of magic plus also Bladesinger, which is really more suited to bolstering an Eldritch Knight or Arcane Trickster, but whatever. The point is, they only get one subclass this time around. But what a subclass it is.

The War Wizard was one of my favorite subclasses from the Unearthed Arcana playtest material earlier this year. And it’s definitely my favorite Wizard subclass that we’ve seen–I know the Theurge gets a lot of love, but that feels more like a variant of the Arcane Cleric, anyway–the War Wizard is a fantastic take on the traditional Wizard. Less of a scholarly typeI like to think of the War Wizard as the Adventuring Wizard. They’re the ones who get up close and personal. Their abilities are a combination of defensive and offensive powers that let them actively deflect attacks (like an always-available shield spell) or empower their spells to do more damage.

In fact, if you were paying attention on the video, you’ll notice that Jeremy Crawford points out they’ve got the ability to store up Power Surges whenever they deflect or counter enemy magic, using that to later make their own spells beefier. This is a pretty big change from the last time we saw the War Wizard. Previously, they could once/rest just straight up add two-dice to any spell that did damage to more than one creature. I’m curious to see how their other abilities have changed. We know that the arcane deflection is still a big part of it–and for those of you too lazy to go back and check out the original pdf, Arcane Deflection is an ability that lets you boost your AC by +2 or a Con Save by +4 as a reaction, but at the cost of casting any spell other than cantrips until the end of your next turn.

Of course, if you’re using the War Wizard as part of some elaborate Gish build, then, you probably weren’t really wanting to cast spells other than cantrips all that often anyway. That’s what I like about this idea though–it seems to offer a lot of tactical flexibility in some fairly straightforward rules. Do you deflect an attack and mitigate some damage, or do you save up and hope that you’ll cast a powered-up spell the next round. Either way, the class’ abilities center around you actively using magic–it’s a great way to be engaged throughout each turn of the combat–which is a rarity especially for Wizards. That’s why I think they really hit that one out of the park, and am excited to see the final version of it in the next month or so.

But wait there’s more. As if this alone wasn’t enough–thanks to the Extra Life fundraising efforts, we’ve also got a full preview of one of the Subclasses. So here you can see the final version of the Forge Domain Cleric, art and all. And since Wizards has raised over 40k for the Extra Life charity, we’ll also get to see a full preview of the table of contents, so you can at least see what all the sections and subsections of the book are like. It should answer a few questions once the preview goes up.

In the meantime, check out the Forge Domain Cleric. 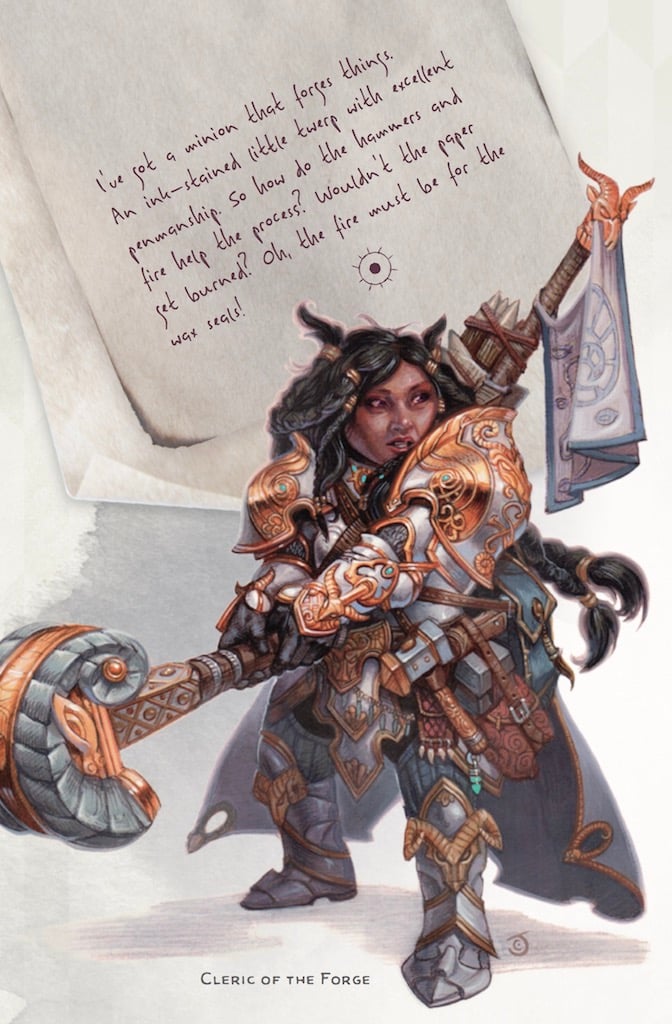 I love the “Cleric of the Forge” note from the Xanathar up there. Clearly he understands what kinds of things should be forged. But also, this artwork is as solid as the class. You can read the full details in the .pdf linked above, but here’s a brief summary. At the end of every long rest, you can infuse either a weapon or suit of armor with magic, making it a +1 magic armor/weapon and all that accompanies that. Sure, once you find a magic weapon, that ability’s usefulness might drop off–but it’s always good to have it as a backup. And by that time, you’re getting so much more out of the class.

The bonus spells you get are pretty sweet too. 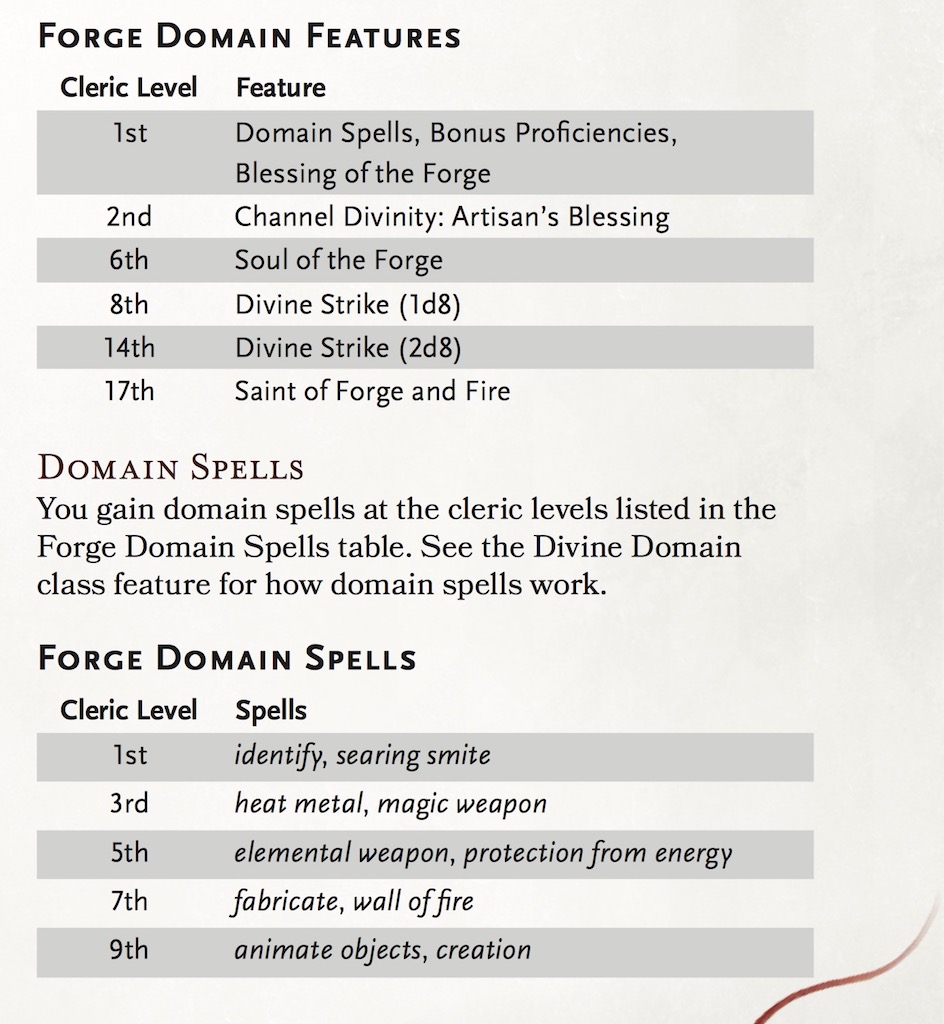 Just a good all-around domain. You’ll never not get something out of it–it isn’t quite as bold as the Light Cleric, but it’s a little more well-rounded. Good if you’re filling in multiple gaps in your party (or if you just want to be able to do whatever is needed at the time). 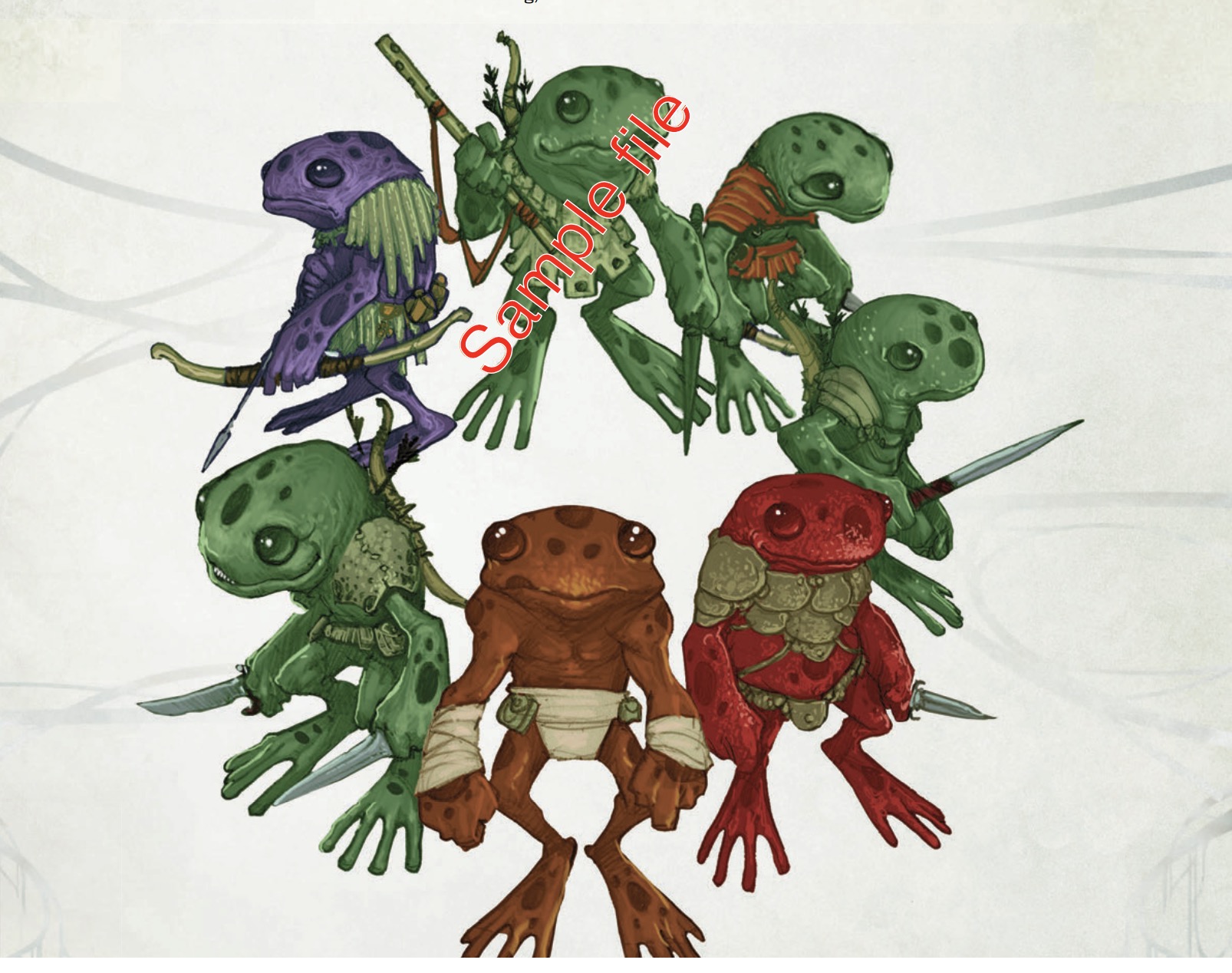 And finally we have one last little preview for you. Right now on the DM’s Guild, you can grab One Grung Above, the officially unofficial rules for creating Grungs as a player race. If you have Volo’s Guide to Monsters, you’ll immediately realize why this is amazing–the biggest pitfall of the book was that Grungs were not a playable race. This error has been corrected now, and normal service has been resumed. On top of that, all the money that Wizards would receive from the sale goes to the Extra Life Charity instead, so you can get your adventurers hoppin’ for a good cause.

Keep your eyes peeled for more opportunities to either do some good, or see some previews. Until next time, happy adventuring.