X-Wing: From Page to Tabletop Strikes Back

We imagine cards for our favorite X-Wing novel heroes– this time, it’s Wraith Squadron’s turn!In a previous article, we talked about how to bring some of Rogue Squadron’s legendary pilots to the tabletop. These guys were the best in the galaxy at what they did, and I tried to give them pilot abilities that reflect their acts of daring and sheer skill.

The Wraiths are a little different. Staffed by screw-ups and cast-offs, collectively carrying more baggage than a major airliner, Wraith Squadron wasn’t meant to be a showcase unit the way Rogue Squadron was. Instead, Wraith Squadron was a hybrid unit: part intelligence outfit, part Starfighter squadron. They were still pretty darn good pilots, to be sure (as if Wedge Antilles would let anyone fly his wing who couldn’t keep up!); but their place in Wraith Squadron was secured by the personal skills they brought along with them, from slicing to infiltration to sniping to demolitions.

Accordingly, on the X-Wing table, we’ll have a group of people who do things a little… differently. They can’t compete with Rogue Squadron for PS and sheer power, but they have some idiosyncrasies that let them get the job done. 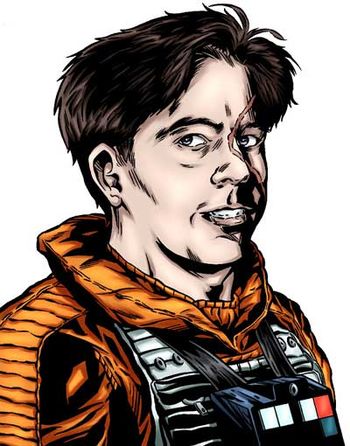 “Wait a minute. A crew card?!” you’re saying, outraged. “He’s a pilot, give him a pilot card!” Well, here’s the thing: as a pilot, Face was above-average but not stupendous. He got the job done, which is nice but also damning with faint praise. Where Face really excelled, beyond as a leader, was in his infiltration work. Trained as a child actor for the Empire’s propaganda machine, he eventually defected and used his skills to be the point-man for Wraith Squadron’s many undercover ops.

As a master of deception, he averted many a danger through quick wit and sheer nerve, bamboozling one high muckety-muck after another. His Moments of Awesome all come outside the cockpit. It’s only right that he gets to perform in that role on the X-Wing stage.

“When your ship is selected as the target of an attack, you may roll one attack die. On a “Hit” or “Crit”, the attacker must choose a different legal target (if there is one).”

Face is of little help in two-ship lists, since the other ship is usually your arc-dodger. Instead, his role is in protecting small-to-medium ships by screwing with your enemy’s plans. How can the enemy commit to focusing on Face’s ship if his shots will end up scattered across your squadron? The deterrent effect is almost more powerful than his actual effect.

There are plenty of applications. He can help Captain Rex keep enemies Suppressed. He can keep a regenning Norra from being focused down until she’s in a one-on-one she can win. He can be a HWK’s guardian angel. He can help a U-Wing… ha ha, just kidding. But you get the idea.

(If you think he’s too powerful as written, he might be; this is the sort of thing that needs a lot of playtesting to get right! The alternative would be one point and discard him for a guaranteed target-swap.) 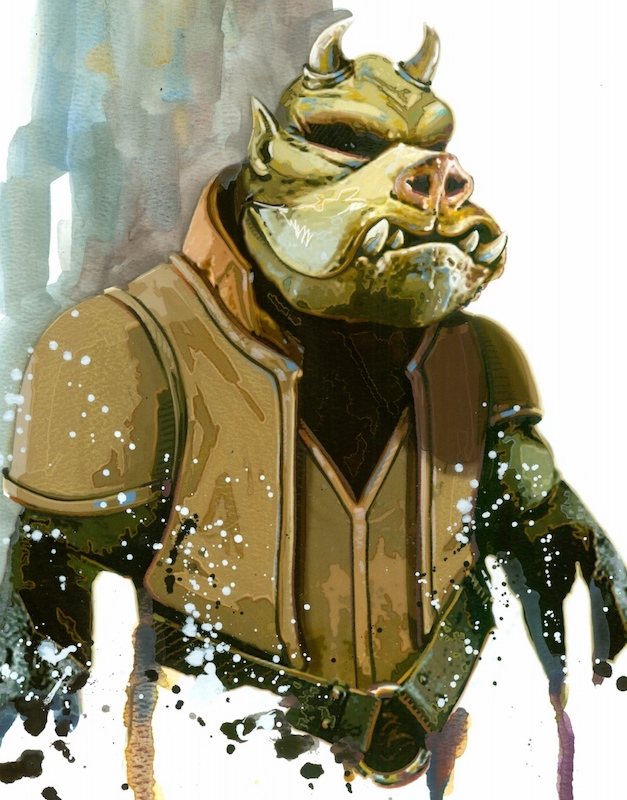 The galaxy’s first and last Gammorrean pilot, Piggy was a product of sinister bad guy research into modifying alien species. Piggy is a certifiable genius, a great planner, and a practical mathematician. He’s also rather tragic: people galaxy-wide see him as “just another stupid Gammorrean”, while he can’t stand being around others of his race (because they’re, well, dumb). And there’s the little matter of Gammorrean temper backed by not-so-little Gammorrean strength and bloodlust. Still, if you asked the Wraiths who’s the brains of the outfit, they’d all look to Piggy.

“Friendly ships at range 1-3 never count their attacks as obstructed.”

In battle, Piggy’s mind sees all those ships and maneuvers as math. He’s very good at math. At his best he became a sort of hive-mind, yelling out maneuvers or shots for his allies to perform. This pilot ability represents him calling shots for his teammates, getting the timing precisely right so that the enemy’s attempts to hide are useless. 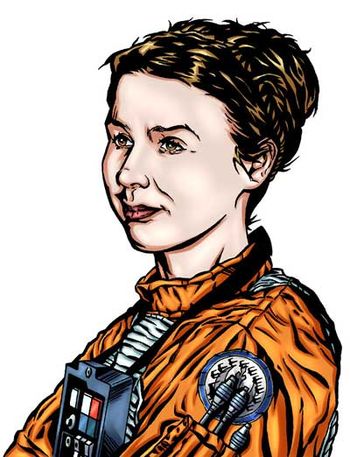 I’ve generally tried to avoid giving away too much in my descriptions of these characters and their shenanigans. Maybe that’s silly of me; after all, the books are twenty years old. But they’re still a delight, and I wouldn’t want to deprive anyone who hasn’t read them of those delights. (You are going to read these books, right?)

It’s enough for our purposes to know that Lara, while not initially a pilot, eventually flies for Wraith Squadron. Unlike most pilots, she keeps her X-Wing’s lasers in single-fire mode. As such, she’s able to achieve feats of amazing precision, like when she one-shot a TIE by putting a single laser beam directly through the pilot’s head. Later on, she’s able to deal crippling damage to an imposing enemy ship by slipping inside its shields and chewing it up. And so:

“At the end of the “compare results” step, if there is exactly one un-cancelled “HIT” result, you may cancel all dice results. If you do, deal the defender one face-up damage card.”

Lara supplements the X-Wing’s gross damage potential with the chance to hit her enemy just right. Her low PS reflects her relative lack of experience, but we’ll still give her an EPT. Why an EPT? First, it’s not like PS3 has stopped FFG before *cough Jumpmasters cough*; second, because the mind games you could induce if you give Lara Crack Shot are sublime. 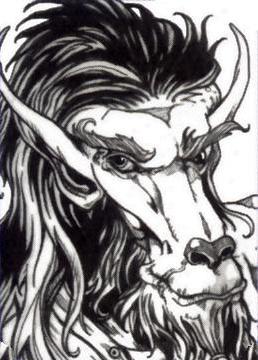 Grinder is a Bothan, with all that that entails-both a high skill in information-gathering, and too much willingness to use that information for his own purposes. Given that “his own purposes” in Wraith Squadron involves “staying alive”, it usually works out. Usually. Unfortunately, it also too-often involves playing pranks on those around him…

“When you declare the target of your attack, you may assign the ‘Sliced!’ condition card to the defender.”

“Sliced!: You may not acquire target locks. When Grinder is destroyed, attacks another ship, or at the end of the combat phase has made no attack, remove this condition card.”

As a master of computer systems and electronic warfare, Grinder was a sort of wizard, taking away the enemy’s best tools for stopping the Wraiths. On the table, he slices into their computers (or their Fire Control Systems?) to deprive the enemy of their target locks. It’s a strong but narrow ability, to be sure: there are plenty of ships that don’t rely on target locks for their functionality, and Grinder won’t help you there. Plus, with him shooting at PS4 he won’t be applying his condition immediately anyway. But that’s okay, because he’s super-effective against his chosen prey. And maybe someone can think of a way for him to shoot in the Activation Phase… 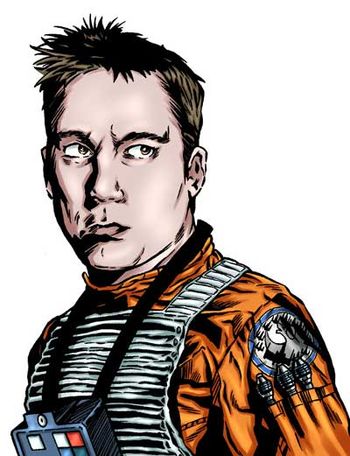 “When a friendly ship is destroyed, assign your ship one ion token.”

What the heck? What is this nonsense? Who’d want a pilot ability that hurts you?

Hear me out. Myn is skilled and lethal, hence his high PS. He’s also deeply wounded. The first thing that happens to him in the books, and which haunts him for their duration, is the annihilation of a squadron under his command in an ambush. The incident leaves him devastated; on several occasions the memory hijacks him in combat, with perilous results.

So the ability fits. But, again, why would anyone fly such a ship? Well, we’re going to aggressively price Myn: in exchange for his drawback, he’ll come in at 22 points, about five fewer than you’d think for his PS and EPT.

Myn, then, is a very different sort of pilot. He’s a win-more ship: he can help you get ahead and stay ahead, but he can’t rescue you if you fall behind. This puts you in the Wedge role, where you have to ask yourself: is Myn’s skill worth the risk of depending on him? Plus, this introduces the idea of using pilot abilities as drawbacks. It’s unprecedented for FFG, but
considerably expands the “trade space” for ability-cost balancing.

(I could have gone with a stress token, since ionization is not strictly what’s happening-it’s the pilot locking up, not the ship. Still, the ion is a harsher penalty, and more closely matches how Myn is described as flying when he has an episode.) 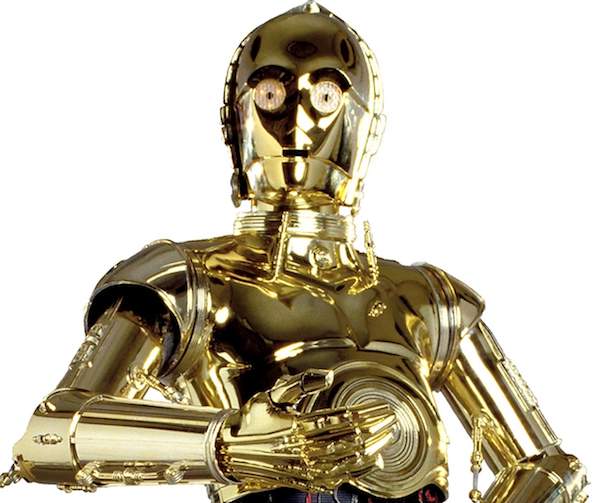 Yes, I know, this is technically Rogue Squadron’s droid, so it should have been in that article… but he’s unconventional, like the Wraiths, and we hadn’t yet broached the idea of using crew slots, so here we are. Stuffy, formal, and proper as all protocol droids are, Em-Trey was instantly unpopular (as all protocol droids are). Nevertheless, over time he redeemed himself in the eyes of the Rogues. When he was around, things just seemed to… appear. Necessary things, like supplies, armaments, ammo, and parts. Unfortunately, other things that were deemed less necessary had a tendency to disappear.

“During setup, choose one friendly small ship. That ship MUST lose an upgrade icon of your choice. It gains an illicit icon.”

We’ve seen in the past that extra upgrade slots generally cost one point. We also know that having more and different upgrade slots is stronger. In this case, Em-Trey gives you a two-for-one swap of upgrade slots (since he himself takes a crew slot) but gives you a slot small Rebel ships otherwise don’t get. It’s, well, maybe not an even trade, exactly-but isn’t that what business is all about?