Loremasters! With the impending Blood Angels Codex on the way, it’s time to look at the Sons of Sanguinius!

The Blood Angels were the IX Legion of the original Space Marine Legions under their Primarch Sanguinius. They are particularly well known for their bloodthirsty nature in battle. They are also one of the most long-lived Chapters, and have a refined aesthetic sense.

Baal – The Homeworld of the Blood Angels

The Homeworld of the Blood Angels is the planet Baal and its two moons are, Baal Primus and Baal Secundus – from which the Blood Angels take their new recruits. The Blood Angels’ Primarch Sanguinius fell upon Baal Secundus after he and his brother Primarchs were scattered across the galaxy. In ancient days Baal and its moons had Terra-like atmospheres. Baal itself was always a world of red rust deserts, but its moons were close to paradises. As the Dark Age of Technology ended in the Age of Strife, civil war erupted between the world and its colonised moons, leading to the nuclear devastation of the planets. Baal Secundus has since been a nuclear-blasted desert world with deadly levels of radiation. This forced the world’s human tribes to build cumbersome radiation suits in order to survive. Mutants were once rife upon the world, frequently at war with the remaining pure humans for dominance of the planet.

The Blood Angels were created from the genetic material of their Primarch Sanguinius. As with all of the Primarchs, Sanguinius was genetically engineered to be a supreme super-soldier but was cast into the warp during his infancy along with his brothers, and found on the nuclear-blasted moon of Baal Secundus. Sanguinius was affected by the warp, and when he was found by one of the few unmutated human tribes on Baal, he had a pair of angelic wings growing from his back. As he matured quickly, he was able to use his superhuman powers and abilities to unite the humans of Baal against the mutants and become their leader.

When the Emperor found Baal in his search for the twenty Primarchs, Sanguinius immediately recognized him for who he was and bent down on his knee, pledging his service. In this, Sanguinius was one of the few Primarchs who did not challenge the Emperor upon their reunion. The Emperor then took Sanguinius and a number of his best warriors and placed him in command of the Blood Angels Space Marine Legion.

The Death of Sanguinius

During the Horus Heresy, the Blood Angels were one of the few Legions who fought alongside the Emperor during the Battle of Terra. When Horus lowered the shields of his battlebarge and the Emperor teleported aboard the ship, Sanguinius was with him.

The noble Primarch became separated from the Emperor and came across Horus alone. The Warmaster tried to sway Sanguinius and turn him to Chaos, but the Angel-winged warrior refused, and attacked Horus. The Daemonically strengthened Horus slew Sanguinius, as the Primarch knew he would. He had foreseen his death, and yet still engaged the Arch-Heretic, knowing he would die. This has endowed many of the Blood Angel’s beliefs with a deeply mystical streak. Sanguinius’ violent death left a strong psychic imprint on his Legion, since they partially share his DNA. However, this was a willing sacrifice that was made in order to buy the Emperor time and to give Him a weakness in Horus’s armour, which was key in bringing about the traitor’s defeat.

The gene-seed of the Blood Angels (and its successors) is still capable of producing all nineteen organ implants that facilitate the transformation of a normal man into a Space Marine. It also has the unique quirk of vastly extending the lifespan of the Space Marines of the gene-line, and it is not unknown for a Blood Angel to live more than a millennium. The gene-line, however, is also affected by a dreadful flaw, which makes its brethren susceptible to the Black Rage and the Red Thirst.

All of the Chapters derived from the Blood Angels still suffer from the psychic imprint left by Sanguinius’s death. This can cause them to go insane prior to or during a battle, and they believe that they are Sanguinius himself during the Battle of Terra. The condition is irrevocable (except for one case, Chaplain Lemartes, who is largely able to control it), and victims are locked away in the “Tower of the Lost” on the Blood Angels’ homeworld until they finally die. This insanity is known as the Black Rage.

When a Space Marine is overcome by the Black Rage he is reborn in a world of anger, hatred, fury and nothing else. As well as Sanguinius’s memories, the Blood Angel is touched with a small portion of his unearthly power, boosting his strength and vitality to superhuman levels. 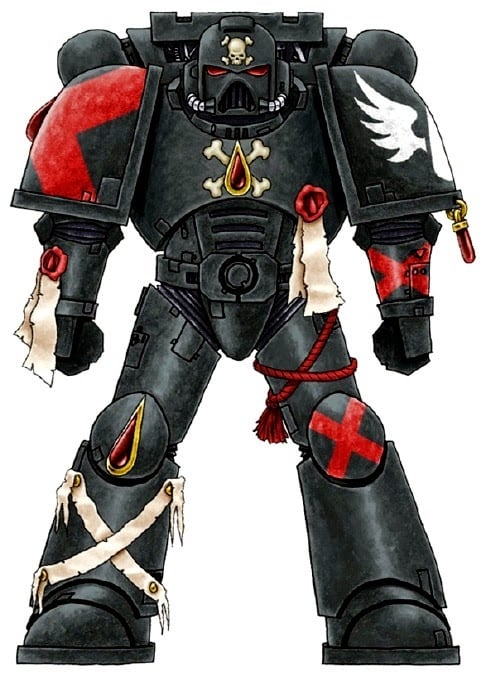 Rather than face a slow, insane death, Blood Angels will form those who have newly succumbed to the Black Rage into a special unit known as the Death Company. They paint their armour black, daubed with red crosses, signifying the wounds of Sanguinius, and are usually led by the few Chapter officers, notably Death Company Chaplains, who are able to communicate orders to these lost warriors. They are then sent out to perform the most dangerous assaults, hoping for a quick and honourable death in combat.

The other name of Black Rage – the Flaw of Sanguinius.

The Red Thirst is one of the two genetic flaws in the gene-seed of the Blood Angels and their successor Chapters. This causes warriors to suffer an unusual bloodlust, instilling them with a thirst for the blood of their enemies. Those who succumb to the Red Thirst or Black Rage are either formed into the Death Company or locked away in the Tower of the Lost on Baal, until they change completely, going insane. These traits have also been passed on to their successor chapters, such as the Flesh Tearers, Blood Drinkers, and Angels Sanguine. One successor chapter, the Lamenters, was until recently thought to have managed by unknown means to eliminate the flaws from Sanguinius’ gene-seed, but has been stricken by extraordinary bad luck in battle and as such has been nearly annihilated.

The Red Thirst is so overwhelming that the Blood Angels forget their noble heritage and completely lose control over themselves. It is not unheard of that Blood Angels squads abandon advantageous positions to engage the enemy in hand-to-hand combat. More often than not, these assaults turn out to be so devastating that unprepared enemy forces are simply swept away.

The Red Thirst was a genetic flaw deeply embedded into the Blood Angels Gene-Seed. When Sanguinius became aware of it, he felt responsible for the suffering of his sons and desperately sought out a cure while keeping it secret from the rest of the Imperium, including the Emperor himself. While isolated instances of Battle-Brothers succumbing to the Red Thirst occurred throughout the Great Crusade, it was not until the Battle of Signus Prime that the entire Legion suffered from it.

Would you like to learn more? Visit the Blood Angel’s page on the Lexicanum for a closer look at the Sons of Sanguinius!

Author: Adam Harrison
Writer, Editor, Texas Native, and Austinite for 15+ years, Adam covers all things Tabletop Gaming. Which includes Warhammer 40,000, Age of Sigmar, D&D, Board Games and everything else that involves dice, boards, cards and a table. A hobbyist, player, and collector of miniatures and games, Adam's current obsession are his Death Armies for Age of Sigmar, his Blood Angels and Tyranids for 40k, and his ever growing Arkham Horror: The Card Game Collection.
Advertisement
Blood Angels Games Workshop Lexicanum Lore Warhammer 40k
Advertisement