When X-Wing fans were asking to “fix” the JumpMaster 5000, I don’t think they meant for it to be neutered.

If any ship out there needs an ice pack for all the lumps it’s taken recently it’s The JumpMaster 5000. In case you missed the FAQ news that’s been rocking through the X-Wing Community, two of the biggest nerfs to ever hit the table are taking effect next Monday, November 6th, 2017!

The first nerf is Biggs’ ability. It’s no longer Automatic, the owning player can only use it Once per game. That’s a pretty big deal – we could debate about the meta impact of removing player agency and choice vs a point increase or some other type of errata, but what’s done is done. I know a lot of folks feel like Biggs was the only T-65 worth flying – and I can’t argue with that. With his nerf the torch-bearer of the humble T-65 X-Wing has been gutted. However, I think the U-Boat nerf is probably a bigger deal because it nails an entire class of ships vs 1 pilot. 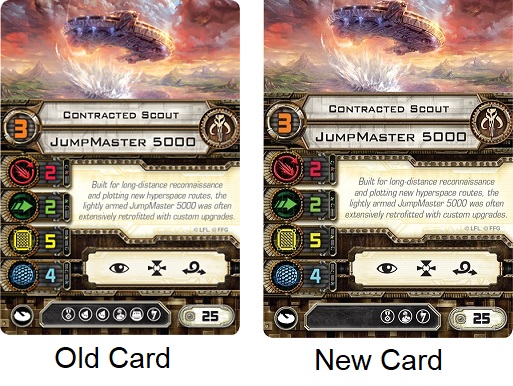 FFG has removed 3 upgrade slots from this card – two torpedo slots and the Salvaged Astromech slot. That goes for ALL versions of this ship and not just the Contracted Scout. That STINGS. I don’t even fly the JumpMaster and I’m feeling the pain for them because this one cuts pretty deep. And it’s not the first time the U-boat got hit with the Nerf Bat.

Around the same time last year, FFG set it’s sights on fixing the JM5K’s dominance of the Tournament Meta. They decided to go after a card that seemed to target the ship indirectly: Deadeye. 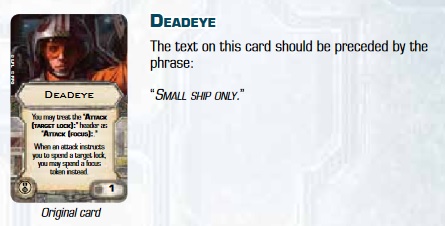 Finally, over the course of recent tournaments, we noticed that the metagame has been radically shifted by a particular combo. Although there are many moving parts that had to come together to make this happen, the JumpMaster 5000™ loaded out with Deadeye, torpedoes, Guidance Chips, and a dice-modifying astromech (such as Overclocked Astromech or R4 Agromech) or crew member (such as Recon Specialist) is a force to be reckoned with. While not unbeatable, as tournament results have shown, this particular list has displaced many of the most competitive Rebel lists by creating an often insurmountable alpha strike during the first round of engagement. This has pushed a lot of viable lists to the margins of the tournament scene, to the detriment of overall tournament diversity.

A crucial card in this combo is Deadeye, because it allows the JumpMaster 5000 to circumvent the usual difficulties of acquiring a target lock. After much consideration, we decided the simplest and best option was to restrict Deadeye to “Small ship only.” Because the JumpMaster 5000 is currently the only truly effective large ship ordnance carrier, this added stipulation doesn’t have much effect outside of this particularly effective combo.

FFG put the hit out on the JumpMaster…

Twice now, Fantasy Flight Games has gone after this ship specifically. Was it warranted? Personally, I have no skin in this game (as in I didn’t fly it so I won’t be missing it). However, I know that it was a popular list for a relatively long time in the life of the game. Perhaps FFG felt like the ship was stunting the growth of the Scum Faction’s meta. When you have an obvious “go-to” ship like the JumpMaster why bother taking a Firespray, Shadow Caster, or Hound’s Tooth?

Did it go a little too far? Maybe. Removing BOTH torpedo slots and the Salvaged Astromech seems almost too harsh. But as ChahDresh pointed out on Monday, it’s really just math. He calculated that the approriate price of the JumpMaster should have been 28 points – by knocking out 3 upgrade slots, that brings it closer to it’s actual cost of 25 points (assuming a 1 point per upgrade slot ratio). I don’t disagree with his assessment either.

Is There A Silver Lining?

Well if you listen to the game designers, they still feel the JumpMaster 5000 is a “powerful ship” because it still has the following going for it:

Personally, I think the double torpedo nerf was probably enough. Leaving the Salvaged Astromech probably would have been okay. It would have meant the math was off and it would have been slightly more efficient than other options. But a choosing a ship should have some type of advantage over others, right?

Then again, that could have been a preventative measure so that they (the designers) could introduce new Salvaged Astromechs into the game without fear of making the JM5K a problem (again). Or the same could be said about the Torpedo slots. Who knows!? The only thing I can say for certain is that the JumpMaster 5000 won’t be as big a player as it once was – and I think that was the ultimate driver behind this decision from Fantasy Flight Games.

What do you think about the JumpMaster Nerf? Was it warranted? Did it go too far? What about increasing the points? What other solutions would you offer for the ship?