ChahDresh takes a look at the fun upgrade cards in the next wave of X-Wing ships– and the homes they might find in your existing fleet.

It’s that time again! With a new wave come new upgrade cards, and with the final preview article now posted, we know what they all are. FFG has done two things with this wave that are remarkable. First, more of the cards than usual are ship-unique, including a ship-unique title for every ship in the wave. Second, there are a larger-than-usual number of reprints. Everyone say an alleluia for the reprinting of Autothrusters! The result is a wave that has a lower proportion of new cards than past waves, even if the number of new cards is higher.

But it’s no fun saying, “Gee, you should put this ship-unique card on the ship it comes with”. No, we’re going to look at the new generic upgrade cards to see how they spice up the game. Let’s find them new homes amongst the game’s existing ships. 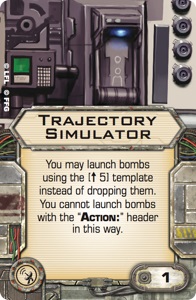 The list of bombers is short; the list of bombers with Systems slots is even shorter. You could put it on a Scurgg with Havoc, I suppose, but the Havoc has enough else going on with it that there’s surely a better Systems upgrade for it.

So we’re going to take yet another stab at finding the Card That Saves the Punisher! Try this out:

Yes, this is likely to underperform until the Empire finally gets something like Sabine or Cad Bane—something that acts as a bomb multiplier. (When/if it does, expect Decimators to roar back in popularity like a sort of large-base K-Wing.) Still, it looks like it could be worth toying about with: it’s just durable enough to withstand casual fire, and just annoying enough to be a bother. I considered Unguided Rockets, but since you’re counting on the Bomblets more than the Rockets you’d be spending your focus token a lot on defense, which neuters the rockets, and we’re trying to carefully manage this guy’s threat profile (and cost). It’s still hard to imagine this being more effective than, say, a TLT Aggressor for a couple points fewer, but it’s worth a shot. 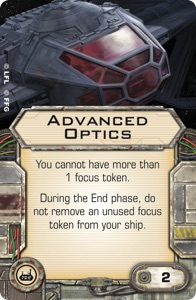 We can take our cue here from Comm Relay. In play experience, Comm Relay was favored not as a way to get extra action economy for hit-and-run playstyles; it was favored by ships that intended to hold the token long-term to power Juke (mainly Omega Leader). The closest analogue for focus tokens is, naturally, Poe. The competition for his tech slot is stiff: Intensity builds mainly favor Primed Thrusters to keep the dial open, while tankier builds favor Sensor Cluster or even (oddly enough) Comm Relay. Still, it’s hard to imagine a ship that would use this upgrade better than Poe. If he doesn’t use it, it’s likely no one will. And freeing his action from the tyranny of focusing would seem to allow him to take repositioning actions more frequently, better enabling Black One. 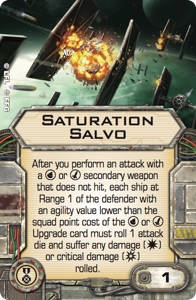 Jostero’s seeing plenty of play in Harpoon-oriented lists, but this card allows him to be a self-licking ice cream cone. Try this:

The key here is the word “may” in Cruise Missiles, where you “may” add dice for the speed of your maneuver. Decline to do so and Cruise Missiles are a one-die attack (which you can reroll, if necessary, with your target lock). Miss, proc Saturation Salvo, proc Jostero. Use the extra dice and Chips when you want to actually kill what you shoot.

…of course, if we interpret that Vaksai has a pernicious interaction with Saturation Salvo, this isn’t actually so nice (it would only work on 0-1 agi targets)… and, though it works turn-after-turn, it only sort of works, especially in comparison to the more straightforward and less perverse Harpoons.

This is a weird one: it’s ordnance built around de-fanging jousters, especially other ordnance. If you take this with a high PS, you can negate an enemy ordnance strike, but wouldn’t you rather try and kill stuff instead? If you take it with low PS, sure, you can maximize the value of the second round of a joust… but you have to survive the first round of the joust with enough grace that you can make up the difference in round two, and you still have to get your target lock.

With only three dice, too, it’s not terribly reliable (even though you can keep your lock to modify the shot). I’m a big skeptic about this one. 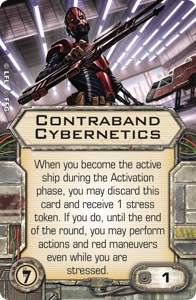 Maybe it’s redundant for a droid to have this card… or maybe IG-88 is a walking example of contraband cybernetics. Be that as it may, everyone’s favorite series of assassin droids could benefit from this. The Aggressor needs all the help it can get keeping enemies in arc, and is heavily action-dependent in most builds. Contraband Cybernetics gives them a get-out-of-jail-free card. Whether it will edge Glitterstim or Inertial Dampeners in that slot is another question.

Note that you don’t have to do a red to get value out of CC; if you’re stressed and want to do a white but still take your action, this could be your way to do it. Uh-oh—don’t look now, but Scum’s “all the stress” ecosystem is rising from the ashes… 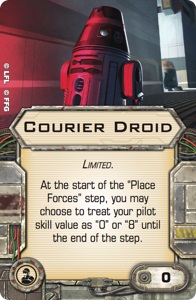 Okay, so the moff isn’t a ship. But he’s always hungry for fools to shove out the airlock, and the droid does that for zero points. ‘twill suffice, ‘tis enough. 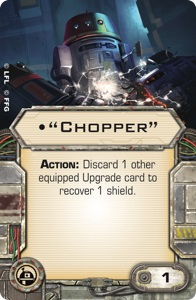 What is it with Chopper being a raging cannibal? This droid has issues. Anyway, Y-Wings, X-Wings, and ARCs all have the ability to equip ordnance, but they by and large haven’t, in no small part because of the support infrastructure (in terms of more cards) ordnance needs to shine. Chopper here offers the opportunity to chew up some of that infrastructure (Extra Munitions and Guidance Chips) for extra shields after they’ve run their course.

But maybe not—it’s an action, and these ships are often action-strapped. You know who isn’t? Thane:

The idea would be to run Thane alongside some other, higher-threat ship. If they shoot at Thane, great! You can recoup some shields to force a truly dedicated effort out of your opponent to finish him, and in the meantime your real bruiser is unmolested. If they don’t shoot at Thane, great! Go to town with extra actions and set up some nasty shots, and feel free to brush off casual damage by eating your Chips (or Chopper himself). 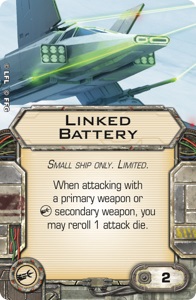 As with Trajectory Simulator, the list of eligible ships is short. Firesprays and Lambdas would love this upgrade, but they can’t get it. TIE Defenders don’t want it, since it doesn’t play with either of their titles. That leaves B-Wings the winners by default. And, unlike the Starwing, the B-wing can get good value from Linked Battery purely for the primary weapon boost.

This gives us something of a conundrum, because the most common upgrade B-Wings get is Fire Control System, and that doesn’t stack with Linked Battery. At least the trade-offs are clear: Linked Battery is superior when you have to swap targets; Linked Battery is superior in the first round of engagement; when it does work FCS is slightly better (~1/6th better) when focused, and much better when unfocused. The points costs are the same, so you can choose based on those priorities. The wild card: taking Linked Battery frees up the Systems slot for something else *cough Advanced Sensors cough*. But now points are starting to become an issue… 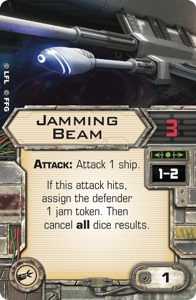 I’m a Jamming Beam skeptic. If you’re taking three-dice cannon shots, aren’t you better off taking an Ion and setting your opponent up for annihilation rather than simply stripping a token? Or a tractor beam to set up your wingmen? Or even a Flechette to hold your enemy’s actions ransom to the greens on his dial? Especially with the ever-increasing number of ways there are to gain dice modifications without actions…

More to the point: how many squadrons can have one of their ships (with a cannon slot) punt on doing damage? The list is pretty darn short. For my money, it comes down to TIE/D Defenders. So let’s say Rexler. The one thing Jamming Beam can do that other effects can’t is strip already-acquired target locks, frustrating ordnance builds. This makes Rexler an Imperial Wes Jansen. Add Veteran Instincts for great justice (and to strip the locks before the ordnance flies). 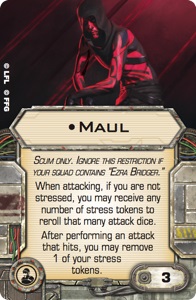 Ezra is a bit too obvious. Yes, B-Wings (especially named ones) are on the outs right now, and yes, they can also get Linked Battery to duplicate much of Maul’s functionality for two points fewer (counting B1/E2). What’s special about this combo is that it offers action-free double modifications: if you have to re-roll any dice, the stress becomes your offensive focus. If you have to reroll lots of dice, Keyan sheds the stress with ease, being able to deal with as many as three a round (green maneuver, spending a stress during the attack with Keyan’s ability, hitting with an attack for Maul’s text). And you still have your EPT slot free for other shenanigans. 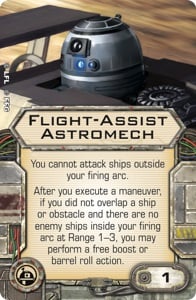 I would call Flight Assist Astro “the Wal-Mart brand BB-8”, but their roles are just different enough that the comparison doesn’t sit right. The Flight Assist Astromech promises you action economy, but there’s a reason it’s a one point upgrade: it’s a fickle thing. The requirement for there to be no target in arc is a harsh one for low PS pilots. Their usual problem is that the enemy ace is there when they move, but disappears when it’s the ace’s turn. Flight Assist is more powerful for high-PS ships, since it allows them to lock up targets they couldn’t nail with their maneuver alone. Problem: high PS ships prefer to arc-dodge to make up for their cost, and the Flight Assist doesn’t really help you do that.

Instead, this suggests that the prime ship for this upgrade is a high-PS T-65 who does his job by punching people, and occasionally needs a hand making that happen: Wedge or Wes. BB-8 is better, but Flight Assist is cheaper and generic. Really, though, any T-65 can make good use of it. T-65s are always hungry for droids to feed to Integrated Astromech, and Flight Assist has a higher potential impact than most other 1-point droids.

Alternative: Ello Asty. Ello’s pilot ability, though sweet, has always left him in an awkward spot. An arc dodger really wants a higher pilot skill than Ello’s 7, especially with the current upward pressure on PS, which means Veteran Instincts to push him to 9. VI leaves Ello strapped for action economy and dice mods. Enter Flight Assist: by getting repositioning out of the droid slot, Ello can spend his EPT on VI and still get dice mods from his action—or even double repositioning out of a T-Roll, which is an exciting thought. It’s the sort of trick I love from my BFF Nien, but at PS9. Tasty. 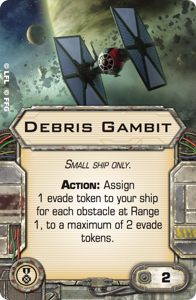 This card is “Small ship only”, almost certainly because Dash Rendar would make it ridiculous. Sabine, on the other hand, has a natural pilot ability that allows her to hug debris, a turret to let her attack out of arc, and a crew slot for utility. I mean, it could work… it could also be a lot of work for meager returns. 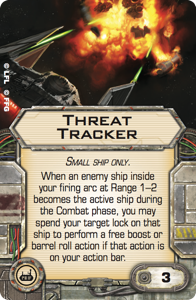 What do you need to use this card well?

What I’m saying is, this card was made for Kylo Ren the way the Millennium Falcon S-Loop title was made for Rey. Sure, you could use it on other pilots… but if you are, you’re probably missing the point. We don’t need another pilot to adopt Threat Tracker. It already has a devoted, loving home.

(Alright, if you insist: Quickdraw.)