D&D: A New Game Appears On the Boardwalk

There’s a new board game coming to D&D in August, and it paves the way for the module coming in September! Check it out…

At this year’s Toy Fair, Gale Force Nine had a lot to show off, according to ICv2. With products ranging from new Spell Cards, Monster Decks, and Magic Item Cards, to paints for their Collectors Series miniatures, GF9 has a big year ahead of it. But the star announcement of the show is an untitled new Board Game due out in August that’s set to tie in to the upcoming Boardwalk module which is due out in September. Here’s what they found out: 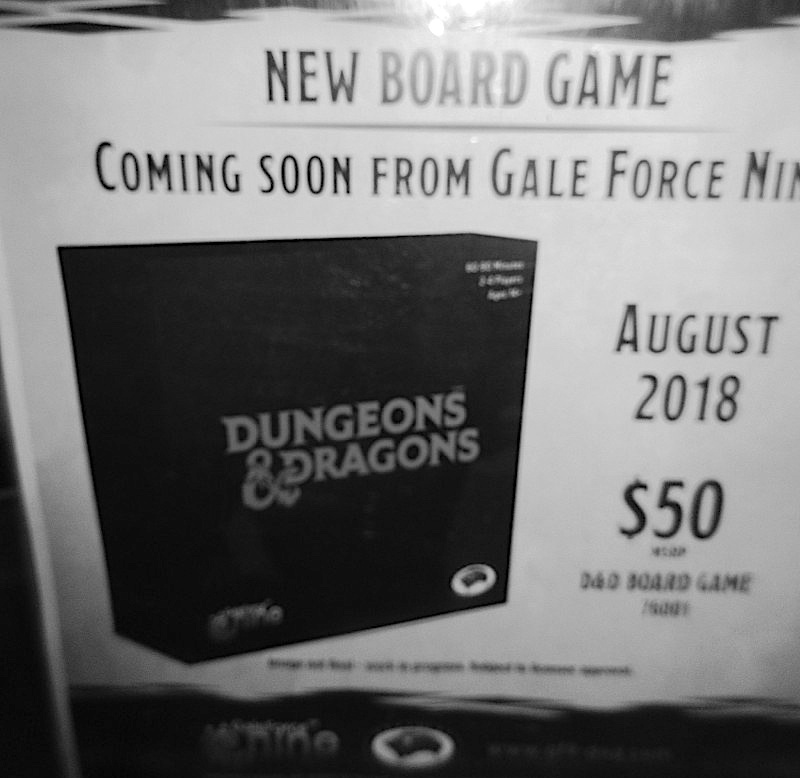 “It’s an untitled release at this point because it’s tied to the modules coming in September,” Mackey said.  “We know it’s going to be a $50 price point.  It’s going to be a two to four‑player cooperative game.”  More information about the release will be available this summer, as early as June.  The game itself will actually be released in August, ahead of the new Dungeons & Dragons adventure campaign.

The company is also adding to it’s popular D&D Spell Cardsline.  “We’re going to have two monster decks.  Basically, they’re the cards that come in the Monster Manual.  They’re going to be broken out by level.  They’ll be two packs.”  The cards include statistics and information about the monster on one side, and artwork on the other.

GF9 is also adding a Magic Item Cards deck.  “That’s everything that’s in the Dungeon Master Guide, apart from a couple of items,” Mackey said.  Release for the decks is planned for June.

This is all fairly exciting stuff. A 2-4 player cooperative game puts me in mind of the D&D Adventure System Board Games like the Tomb of Annihilation or Temple of Elemental Evil, but they have, in the past, been done by WizKids. It makes me wonder if this isn’t some new kind of board game that we’re not used to. After all there’s been some pretty hefty experimentation in that realm lately, with things like Betrayal at Baldur’s Gate proving that D&D is flexible enough as an idea to be adapted into other formats. Maybe we’ll see some kind of D&D-esque take on Pandemic, fighting off a Spellplague or what have you.

I mean, I doubt that’s what it will actually be. More than likely it’ll be adventure-focused, especially if it’s meant to tie into the upcoming modules–but this too could be cool. Another avenue for exploring what promises to be a massive campaign. The current rumor is that both Broadway and Catacomb are going to be two linked adventures (some kind of 512-page megacampaign), and if this holds true, then I think it’d be really interesting to see other ways to explore that same meganarrative. That’s something that Fifth Edition does really well, and if WotC is branching out, this could be a chance to see something cool.

Even if it is just an Adventure System Board Game, those games are fun. They give you the experience of D&D in a complete package. You don’t have to wrestle with finding a DM (which can be tricky) but you can dive into the story of it. At a $50 price point, I’m not sure that it’ll be the same though–because those are typically $80-$150–but whatever this turns out to be, we’ll keep you up to date with the news as it develops. So be sure and check back.

Author: J.R. Zambrano
Bell of Lost Souls Staff Writer and DM, J.R. covers RPGs of all stripes and on occasion eats sandwiches. You can ask him about either at [email protected]
Advertisement
Dungeons & Dragons Gale Force 9 RPGs Rules Tabletop News Wizards of the Coast
Advertisement